By the way, I checked out the issue from part 1 that had an article on homosexuality. What was the mainstream media's view of it back then, as conveyed to middle and high school girls? It was mostly about girls practicing kissing with other girls, wanting to hug each other, etc. -- did that mean you were a lesbian? No, and there wouldn't be anything wrong even if you were. But it was surprisingly light on propaganda, just the typical acceptance talk you'd expect from an adolescent psychologist, and not even in a hectoring tone. It didn't discuss the real freak cases, namely gays, since it was written for girls.

Continuing on with the April through June covers from 1985... 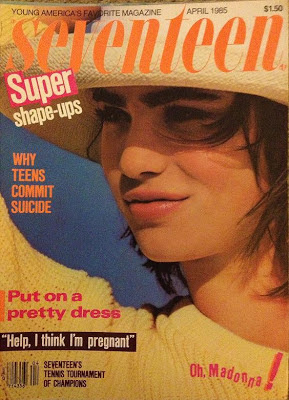 Another model rather than celebrity, another extreme close-up, another set of animalistic eyebrows, and another case of we can't tell exactly where she is or what she's up to. The viewer has to imagine that, but there clearly is something going on. It's not just a celeb du jour shot against a solid background.

Two items about external appearance, a small and hardly visible line about what celebrity is featured inside... just think, Madonna was already world-famous at this point, and here she is, not even on the cover, with her name in barely visible type tucked away in the corner, beneath the face of some unknown teen model. Celeb-obsession was barely there in the '80s.

There's one item about sports. And two about heavy-hitting social issues -- "Why teens commit suicide" and "Help, I think I'm pregnant!" Both of those problems are far less frequent these days, but that doesn't mean they're non-existent. Yet a magazine for teenagers won't touch them, or other social issues, today. "Seriously? Um, awkward." People only pay attention to a problem if it's rising in prevalence ("God, it just keeps getting worse"), not if the prevalence is above some threshold.

I read the article on teen suicide, and it was very matter-of-fact -- not condescending, not hysterical, not Save the Children, or anything like that. They didn't glamorize suicide either -- you get the idea that it's mostly the total rejects and outcasts who feel no hope, the real Martha Dumptruck type. It also gives advice on how to recognize warning signs in your friends or people you know, and some practical tips on what does and does not help that person out (e.g., don't brush it off and tell them things will work themselves out somehow). Very practical in tone. 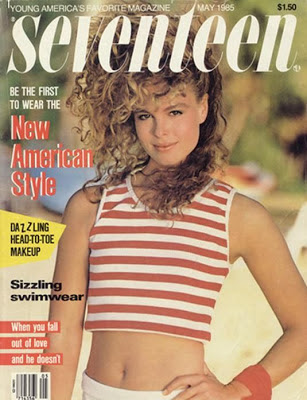 Another model rather than celebrity, shot on location with shallow focus to suggest the background and leave the viewer to imagine the rest, and another subdued rather than kabuki expression on the model's face, making it easier for girls to empathize with her. Somewhat unusually, it's shot from far enough back to see her waistline.

This one's a bit more focused on appearance, with three of four items about clothing and make-up. It's the lead-up to summer, I guess. But there's still a reminder that girls back then had an active social life, including with boys: "When you fall out of love and he doesn't." Again we see them assuming that the reader has a specific "he" in her life, with whom she's had a close relationship. Not generic "guys" who the girl doesn't even know or plan to interact with, like "What do guys think about you?" 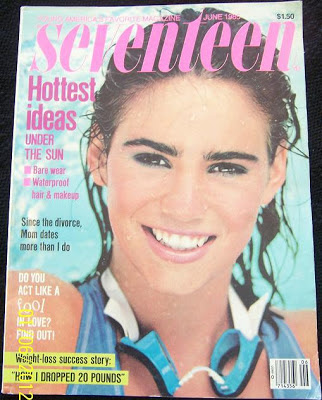 Yep, it's the same eyebrow model from April, and shot pretty close-up for intimacy once more. Shot on location with something of a costume and props to create a little "summertime at the pool" atmosphere. (Back when people still went to the pool...) She looks pretty and confident, a winning combination for all the girls who want to be like a cover girl.

Since it's like you're right there with her, maybe the girls are also imagining that they're close enough friends that they would hang out at the pool together. It's not something you go do with minor acquaintances. And the familiar, engaging look is like, "Hey, what're you up to? Wanna go scope out some boys by the deep end?" Her expression is informal and friendly.

There's a large block of items about external appearance for summer. "Bare wear" -- yeah, don't think you'd see that these days. More like how to choose the longest maxi-dress and the most obscuring floppy hat and sunglasses. And another appearance-type item about dropping 20 pounds. This was before the obesity epidemic made it anti-democratic to criticize fat people or offer them tips on how to shed the fat.

No celeb gossip advertised on this cover. The remaining two of four sections are on a pressing social issue and relationships with boys. "Since the divorce, Mom dates more than I do" -- the divorce rate peaked around 1980, and although falling was still fairly high in the mid-'80s. And yet it's not zero today, so why don't you read about it in Seventeen, or hear about it in the media generally?

In Google's digitized library (Ngram), the phrase "children of divorce" shows a steady rise in frequency from the mid-1920s through the early '90s, and a pretty sharp drop after that. Concern really ramped up during the '70s and '80s. Again it seems to be a case of paying attention to a problem that is getting worse, not one that exceeds some threshold unacceptable level. Dude, Children of Divorce should totally by the name of a band (and probably already is).

"Do you act like a fool in love? Find out!" The sincerity behind these silly quizzes is charming. Here again the editors are assuming that the reader has been in love enough times to evaluate how she acts. Skimming over the more recent covers, you never see a question like that.

Adolescent girls don't really fall in love anymore. They might find a guy who they think is cute, or who's a not-so-ugly practice boyfriend, and they'll get into a relationship just because, or out of convenience. More likely, they won't find a boyfriend at all, nor "hook up," but do whatever it takes to get lots of male attention without having to put out for or interact with the boys. Bad-faith attention junkies, strutting around like wannabe celebrities ("no pics plz, i'm busy looking down at my phone"). That head-over-heels, "stand by your man," together forever kind of vibe has totally evaporated from teenage social behavior. It's more rational and calculating.

Just as in the first three issues, we see how little girls were interested in seeing everything the cover girl was wearing, how they were instead interested in imagining themselves playing the role of whatever the cover girl was up to, or perhaps imagining her as their intimate friend -- something you never imagine when it's a celeb du jour (who is shot from much farther back, to maintain sufficient distance). You know everything about the celeb, including the fact that she's never going to be your friend. But that anonymous model much closer to your own age? Hey, you never know, it could happen.

That was always how I felt looking at the chicks in advertising and rock videos, before only celebs could appear in ads (and before rock videos went extinct). Fantasizing about winning over Kelly Kapowski? Well, no harm in that, but no way would a celebrity actually get close to one of us. But some unknown, mysterious babe from a perfume or cologne ad, or that chick from the Aerosmith videos, or the Doritos girl? Hey, you never know, it could happen. (Unless they became famous.)

Girls used to be a lot more curious about other people, and more empathetic in relating to them. Now when a girl admires another girl, it's not for her beyond-the-ordinary kind of persona, but because she's modeling some stuff that the girl doesn't have yet. "Omigosh -- WHERE did you get those yoga pants for your Pomeranian?!?!?!!!!" It's unsettling and off-putting how thing-oriented, how autistic girls have become. And so quickly.