Changes in female psychology as reflected in Seventeen magazine

It seems like when the zeitgeist makes a major shift in direction, it affects young people the most. They aren't totally set in their ways yet, and they must grapple with the reversal of direction for themselves. Their parents probably can't help them since they didn't experience such a huge change in direction when they were young.

I also think females respond more to the changes than males. During the 1960s, '70s, and '80s, everybody became more outgoing, trusting, fun-loving, and curious. But that really stood out among females, who by nature tend to be wet blankets. Then when things changed direction in the '90s through today, it was again females who swung the most violently in the direction of cocooning, suspicion, and being an incurious killjoy.

So you get an even sharper picture of the the social and cultural changes by looking at the world of youngish women. Here I'll look at the most popular magazine among them, Seventeen. It's mostly for 12-19 year-olds, a demographic group that is hard to study because researchers are required to jump through extra hoops to get approval to study them, being minors. The Youth Risk Behavior Survey is one of the best things we have on them, but it only scratches the surface. Their media give us an even richer snapshot of what they're like.

I'm only going to look at the covers since I don't have easy access to the magazines themselves from way back when to today. But the cover is what is meant to really grab the girl's attention and motivate her to buy it, so it encapsulates a lot of the zeitgeist in itself.

The overall timing of the changes won't surprise readers here -- they more or less track the trend in the crime rate, which increased to a peak in 1992 and has fallen since.

In this first post, a single comparison point for the present. Below is the cover of the May 2013 issue. (Here is the full year of 2012 for a further look, with other years viewable as well.) 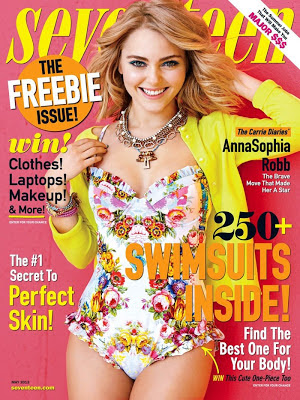 Notice several things. The girl on the cover is a celebrity actress rather than a model. Singers and all-purpose celebs like Kim Kardashian are other popular choices. Girls and women these days have trouble relating to models because they lack a backstory -- what characters they've played, what other celebrities they're friends with, who they're dating, etc. -- and are generally unfamiliar. The incurious audience of the past 20 years has to see an instantly recognizable star.

They aspire to be like the cover girl, and the fact that they already know so many facts about her and her performing personas means that there's less to imagine or fill in for themselves. A model is more vague and unfamiliar, requiring more empathy and imagination on the reader's part to create the persona that they're projecting themselves into.

The background is a simple plane of color suggesting no tangible location, and the lack of props or costumes also keeps it from feeling like the cover girl is playing a certain role. She's just there to model the clothing and accessories, and provide the reader with an already recognizable persona.

Putting aside how busy and cluttered the text is, let's take a look at the type of content it's pitching. Win clothes, laptops, and make-up. Perfect skin. Swimsuits, the best one for your body. The summer jobs that will make you rich. And the blurb about who the celebrity is. This limited range is typical of the past 20 years in the magazine -- it tends to focus only on appearances. Specifically, how you can make yourself up into the princessiest princess out there, to make all those other wannabe bitches jealous, and guys look at you (without, however, intending to date or get physical with them).

References to social life are rare, focus on same-sex friends, and generally discourage trusting others, feeding the paranoia and suspicions of the reader. Boys exist in a hypothetical world, where she mostly wants to know what they think of her, i.e. what's her score from 1 to 10. Allusions to the real relationships with boys that the magazine assumes she's having are practically non-existent. For example, a line about how to get through a bad break-up -- not going to see it.

There's also an absence of larger social issues that might affect people like the ones she knows. I guess by now the writers realize that the reader doesn't have very broad or deep social connections, and is mostly isolated. Hence any problems it poses the solutions to will be personal, not ones that the reader could help to solve for others in her social circle.

I know what you're thinking -- well, duh, what were you expecting? It's just some silly superficial teen magazine for chicks. But neither teenagers nor chicks are a constant over time. Millennial teenagers may be glib self-centered airheads, but they weren't always like that.

In the next post, I'll go over all the covers from 1985 and show just how different girls used to be.