Scented candles have such bland or saccharine scents

Now that I've gotten back into olfactory entertainment (i.e. cologne), I thought it might be worthwhile to have something diffusing throughout my room, rather than just radiating from my neck.

I remember burning incense into the mid-'90s without it seeming like an affectation, along with turning on the black light -- to illuminate the black light poster -- and putting questions to the magic 8-ball. All in a social setting, of course. But now, I don't know, it would seem like more of a juggalo stoner thing. Burning incense would feel self-conscious.

So why not try out one of those scented candles that I've seen on display for awhile but never bothered to inspect?

Jesus, I should have known from the types of perfumes that are popular these days (to the extent that females wear it at all, which is far less than in the '80s). They're obviously geared toward women only. I tried the local hypermarket and some home goods stores, and this list from Bath and Body Works is pretty representative.

There are only three categories available, all off-putting or just not very appealing.

First is the non-scent scent. No, nothing ironic or John Cage-y here, but things like cotton, linen, fresh laundry, boardwalk breeze, rain water, mist, de-salinated beach water, and so on. Totally ordinary, not stimulating at all.

Then there are the citrus and "clean green" kind of scents -- bamboo, fresh leaves, etc., and single or combined citrus fruits. These do a little something, but they're too fresh and clean to make it feel like an enjoyably out-of-the-ordinary olfactory experience. And it has nothing to do with using "plant" scents -- they stick only to the light ones, and not more bracing ones like pine and fir needles, or heavier ones like moss and bark.

I didn't even see that many floral scents. Want to stop and smell the roses? T.S., man. Lavender is about the only one you can find, at that does at least have a slighty heavy / smoky feel to it. Still, it's shocking how uninterested women shoppers are in floral scents these days -- too heady for the emotion-minimizing OCD majority.

Finally, what makes up the vast bulk of these shelves are dessert candles. It's insane how deeply they've rummaged into the dessert cookbook to find ideas. Caramel apple, creme brulee, French vanilla ice cream, sugar cookie, pumpkin pie, mulled cider, blue velvet cheesecake (I don't even know what that is), cupcake frosting, cinnamon buns.... no joke, think of any sugar-bomb that a lardass housewife would get an insatiable craving for in between episodes of Glee, and there's a candle for it. 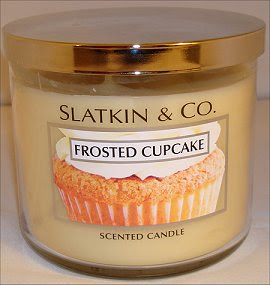 At least these dessert candles have a rich, fatty, spicy smell to them, which does give them something of a heady quality. But that overdose of sugar just kills the pleasure and satiety, and makes you feel like a junkie aching desperately to score a fix... and then just one more... and then just one more. You don't feel transported to some exciting new olfactory world -- you feel trapped in the edgy, twitchy present, compelled to go buy some cinnamon buns to stop feeling so edgy.

You wouldn't believe how rare it was to see milk & honey, supposedly a classic combination of rich and sweet. I only found that among hand soaps, and it was hard to find even there. Honey isn't just a heap of table sugar like you'd find in the dessert scents. It's viscous and sticky and cannot be scarfed down by the spoonful like sugar can. It's warm, glowing, and sensual. The sensuality makes you linger on it and enjoy it, rather than just blow through it to feed some fix without appreciating it. Also, milk & honey doesn't have any grain or dough like a typical dessert does. These women want to imagine shoving pastries in particular down their piehole.

I was also expecting to see some other non-pastry dessert that would still be trendy, like yoghurt and berries or something. Dude, how cool would it be to burn a candle that smelled like blue cheese and strawberries? Get something pungent in there for those who like high-contrast. But nope. The only non-pastry stuff was the odd creme brulee or almond & vanilla or almond & honey concoction. And plain vanilla, too, but it's not very exciting all by itself.

There were a few with "sandalwood" on the label, though it smelled way too sweet and adulterated by other sweet or citrus-y things. Like one said that it was sandalwood "lightened" with mandarin orange and rosemary -- yeah, so much so, that I couldn't smell the sensual wood, but only bright kitchen smells. I even found two out of many dozen that had "amber" listed, though again it was either so muted or drowned out by being paired with a loud citrus. (Ditto patchouli.) No other resin-smelling candles to be had.

I couldn't believe how almost nothing was made from spices, except for cinnamon in a dessert combination. Why breathe in a heady aroma when you can pretend you're in the middle of a pumpkin pie eating contest?

Scents today, whether it's perfume or candles, are either dull and nearly non-existent, or they are palpable but ruin any sense of enjoyment and fulfillment by inducing an addictive craving rather than satiety. Both are the same in preventing any kind of emotional attachment to the place and time, to the atmosphere in which you're smelling them. The dull ones leave no strong impression in the first place, and the sugar-bomb ones take you out of the moment because you're so focused on hoovering another bowl of creme brulee, oblivious to your surroundings, and angry if they intruded on you for even a moment, distracting you from devouring your dessert.

If scented candles had been this popular back in the '80s, you can bet they would've smelled different. Perfume back then was heavy on spices, amber, woods, the headier kinds of flowers, and even animal musks. None of these non-scent scents or candy-and-dessert indulgences. But in general I think women opted to wear their fragrances while going out, rather than air them only around the home. It was part of the more share-in-the-fun attitude back then -- don't keep that aroma all to yourself. Now nobody but those in your own little domestic sphere will smell it, because it's a candle rather than a perfume.

It's like how no one plays music in public anymore, aside from the odd ghetto trash or wigger in your neighborhood. Kids don't go out with a boom box, or leave the car stereo on in the parking lot, playing catchy music for others to hear, as an invitation to join in the fun. It's all coming through earbuds or through some crappy laptop speaker if they're at home / in their dorm room, in private.