Color and light vs. line and volume in painting: Intro to the conflict

In painting there is an age-old tension between drawing (the use of line to define contours and enclose volume) and coloring (the use of hue and, in practice, light to bring surfaces to life). This intro post will review much of what has already been noticed and theorized about this opposition, though I'd say about 10-20% is my own thinking.

What I really want to get to, in the follow-up post, is why one style or the other appeals to people with different personalities (no matter if they're the artist, critic, or viewer), and why the cultural zeitgeist seems to go through cycles favoring one, then the other, then back again, and so on. That will be more original. But I'm guessing most readers haven't encountered this great, never-ending artistic tug-of-war, so even this intro should be stimulating. (At least the ideas, if not the writing.)

Perhaps the most famous historical case of the battle between drawing and coloring took place in Renaissance Italy between the Venetians, who favored colorito, and the Tuscans, who favored disegno. Read more here and here. Below you see the Creation of Adam by Michelangelo for the Sistine Chapel, compared to the Assumption of the Virgin by Titian, both from the 1510s. 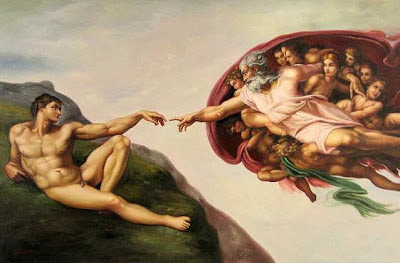 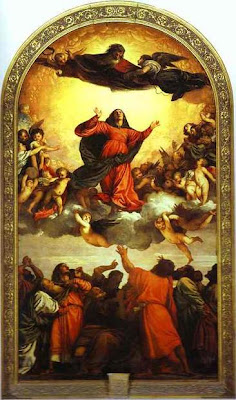 Notice how Michelangelo's use of color and lighting contrasts is pretty subdued. He focuses more on line, reaching sculptural precision in carving the volumes out of space. This is needed to emphasize the mechanical influence of one volume on the other -- namely, the creative act that will occur when one of the statues makes physical contact with the other statue. That sense of "almost, but not quite touching" requires a very clear rendering of volume -- otherwise, their fingertips could be seen hazily melting into one another, and we wouldn't have a clear sense of this being the moment just before contact.

Titian instead relies more on color and especially on light-dark contrasts to achieve dramatic effect. Without even appreciating who they belong to, a triangle of red robes leaps out at you and focuses you right away on the peak, where the Virgin stands. You don't have to be able to discern their exact forms for this attention-directing technique to work. Ditto for the striking emphasis on God in the heavens -- you can hardly make out his form at all. It's enough that he's in dark shadow with deep blue robes just below, standing out against an intensely bright and yellow background. God and Mary are also wearing contrasting colors, blue and red, which makes them areas of immediate interest.

The masterful control of light and color -- particularly that strong backlighting that pushes the action forward toward the viewer -- make this scene come to life in a way that's lacking in Michelangelo. What could be more momentous than the very creation of Man? -- and yet we don't feel the same charge of the sublime when looking at Michelangelo as we get from looking at Titian. Is it the lighting? In Michelangelo's painting, the brightness is basically the same in the human and in the divine areas alike, weakening the sense that God is about to transfer life from his realm to the human realm. God's realm doesn't appear so different or special. In Titian's, the bright heavens contrast with the darkened mundane level below, heightening the dramatic transition of Mary from the one to the other.

Generally, drawing and coloring work against each other because the larger goal of drawing is to mimic 3-D reality, and our strongest depth cues rely on fairly clearly rendered volumes or forms. Interposition, where objects farther away are partly hidden by objects that are closer, relative size of objects, relative height of objects in the visual field, and linear perspective (similarly spaced objects appear to move closer together as they get farther away) -- those have to do with shape and distance, which monochromatic line drawings by themselves can tell us all about.

Coloring impairs the vivid 3-D mimicry of drawing because there's no simple mapping from colors to depths. It's not as though colder (blue-like) colors tend to be farther away, and hotter (red-like) colors closer. (See here and here for experimental evidence.) If there is any way to recover depth from color cues, it must be pretty complicated and weak. Hence, color, and especially the use of contrasting colors, confuses the eye regarding depth.

For the same reason, varying colors makes it harder to "model" a figure, or create the illusion of volume by shading the parts of it that are farther away from the light source. "Mere shading" assumes that the underlying hue is the same across the object. But if the object changes color as you look from closer to farther from the light source, this assumption of the shading technique no longer holds.

However, coloring breathes life into surfaces that would otherwise appear like inanimate slabs of stone -- maybe not the worst thing if you're painting an ordinary stone building. But not if you were painting people, animals, plants, or even inanimate things from the natural environment that still seem to have a life of their own -- fire, water, "earth" (in the broad sense, including sand, banks of dirt or mud, snow cover, etc.), or air-like presences (smoke, fog, clouds, etc.).

And although typically thought of as superfluous and superficial ornament, in fact color reveals the hidden inner life of an object, radiating through the otherwise impenetrable surface rendered by line drawing. This could be its enduring essence -- raspberries are red, blackberries are purple; safe caterpillars are this color, dangerous ones that color -- useful for distinguishing types of objects that are highly similar in form.

And its hidden inner state could be transient -- like, is this specific clump of raspberries fit to eat or not? Is that person over there sick or healthy? Is this female ovulating or not? Shape and volume will tell you little or nothing as they don't change much, or at all, across these fluctuating states. Color sends a much louder message.

Homo sapiens has largely swapped its sense of smell-and-taste for an improved sense of color perception. But odor-and-taste has the same advantages that color has over perception of volume and depth. Raspberries smell like this, blackberries smell like that. Safe caterpillars smell this way, dangerous ones that way. Ripe raspberries smell and taste different from immature ones, and both different from rotten ones. A sick person gives off different odors than a healthy person. A female in heat gives off this pheromone, instead of that ordinary one. And so on.

Color, taste, and smell join with music in not being representational -- you can use them to evoke an object or activity, but not to represent it. Even there, you can only evoke a generic class or type of object, and not a specific member of the class -- e.g., the smell or taste of rotten almonds, but not the smell or taste of any particular rotten almond(s), whose form you could, however, copy very faithfully in a line drawing.

Crucially, there are no general rules mapping the color spectrum onto the spectrums for any inner-state. Green doesn't generally mean healthy and thriving -- it does for plant leaves, but not for their berries, and not for a human face. Red means ripe for some berries (not others), but angry or febrile for a human face (do not approach). Etc. What color reveals about the inner state of an object is far more object-specific. And of course sometimes the color has no mechanically necessary relationship to the type of object or the transient state it's in -- like clothing colors. It's suggestive, evocative, and mysterious.

That contrasts with the universal principles of depth perception that drawing supports. No matter what type of object, or which individual example of a given type, the farther away it is, the smaller it will appear, the higher-up it will appear, the more likely it will be to be partly hidden by other objects, and so on.

These observations all support the long-held belief that line, volume, and depth are more objective and rational, while color and light are more subjective and emotional.

Why does light tag along with color? Blue looks darker, and yellow looks brighter. Primitive color terms in human languages are more like brightness and darkness words, only later being pressed into service to refer to hues. And like the use of contrasting colors, the strong use of contrasting light and dark impairs depth perception -- there's one area in full light, and everything else is so shadowy that the forms are hard to discern. With only a small focal region being illuminated, you can't use the strongest depth cues, which would require seeing the forms in the shadows -- what's their relative size, height in the visual field, are any partly occluding others, do they appear to converge in the distance, etc.?

Paintings with strong chiaroscuro lighting, such as those of Caravaggio, rarely (never?) give a vivid sense of 3-D immersion. They look more like bas-relief friezes, or actors occupying a thin strip of a stage while set against a flat zero-depth wall, in this case a curtain of shadow.

That should be enough of an overview for now. In the follow-up post, a look at what drives individuals and entire societies more toward the drawing or the coloring end of the spectrum.