Generational support for gay deviance and the breakdown of norms

From the most recent General Social Survey of 2012, looking just at whites, here's the percent who strongly agree that homos should be allowed to marry, by 5-year cohorts: 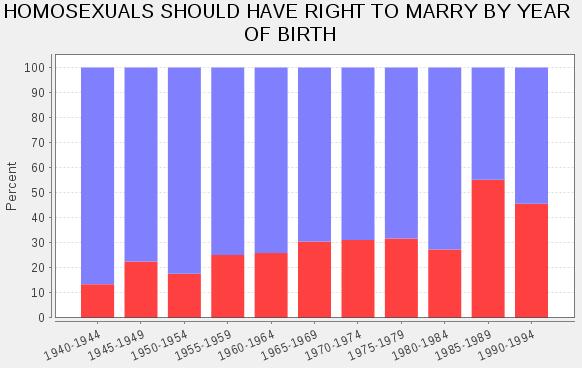 Here's the same graph for those who think homosexual sex is always wrong: 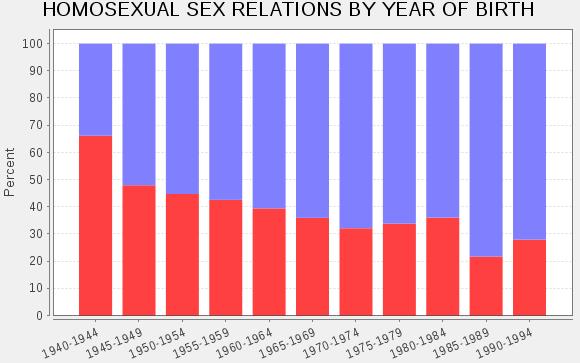 The later you were born, the less disapproving you are, though again notice a much sharper drop among those born after '84.

So what did all of that helicopter parenting and self-esteem inflation do for the minds of Millennials? Helicopter parenting socially isolated them from their peers, and broke them apart from community rituals that would have made them feel a sense of belonging (e.g., canceling trick-or-treating). Lack of social integration during their developing years has blunted their appreciation for group norms that apply above the level of the nuclear family. And all of that self-esteem bullshit gave them a "don't judge me" and "if you got it, flaunt it" mindset.

How else did you expect them to view a community-disrupting bunch of mental fuck-ups? They're natural heroes to the sheltered airhead generation.

The utterly pathetic way that the Millennials have turned out is a damning indictment of this whole "family values" revolution of the past 20 years. In practice, it has meant locking your nuclear family away from all other influences, and only relating to other close kin members. Raising your kids to feel disconnected from, suspicious of, or downright hostile toward non-familial community members. That's even more angering than stunting your own kids' growth -- fragmenting the community because of overblown paranoia, laughably covered up with the fig leaf of "family values."

And to those who unfortunately live in the few parts of the country that have been over-run by NAMs -- your problems won't go away by moving to an all-white area. Go to Alaska, Utah, Vermont, or to an all-white upper-middle-class suburb, and you still won't find any trick-or-treaters on Halloween, or teenagers who overwhelmingly look at faggots with either pity or disgust, and who should stay in the closet.

The only cohort that can feel good about themselves for bucking the overall trend is Gen Y. People born in the first half of the '80s show a noticeable dip in support for gay marriage, when you'd expect it to be a little higher than the late Gen X-ers. That shows up in the "homo sex is wrong" graph too, where we're joined by the last Gen X cohort in being noticeably less supportive of the great gay crusade than our age / birth year would lead you to expect.

Does that make more of a difference than the absolute level of support? When it comes to standing up to all these attacks on communal norms -- yes. Baby Boomers may be even less supportive than we are, but that's to be expected from their place in the series of cohorts. They don't feel particularly strongly about the issue. Gen Y is unusually cold toward queers, and that gives us an against-the-grain motivation that is lacking in the Boomers, or even most of the X-ers. Although X-ers do feel consciously more conservative than Boomers overall, it doesn't show on this specific issue.

And as X-ers get deeper and deeper into their child-rearing years, and as they continue the pattern of helicopter parenting, they'll find it increasingly difficult to explain to their kids about communal norms. "What community, mommy -- the one you've locked me away from my whole life?" And of course explaining doesn't do anything, it's the experience of belonging to a larger group and being subject to its pressures that inculcates the intuitive understanding of the value of group norms -- otherwise all of those enjoyable, rewarding group experiences never could have taken place.

After awhile, it's too late to reverse course. When your kid starts high school, his language is basically frozen in place. He'll have to devote long hours of practice to learning another one. His "formative years" are not called that for no reason.

I think that's behind Gen Y being unusually conservative, whether for overall self-identifying political views or for the queer issue in particular. The '80s and even the very early '90s were the peak of community togetherness, no matter what community you lived in. And since our parents let us run our own social lives once we were out of pre-school, we got steeped in the social environment from very early on.

And not only the social environment, but the physical environment -- whether natural or man-made -- that provides the basis for your sense of belonging to a particular place, aside from belonging to a people. How can you feel close to your land when you aren't allowed to climb the tree in your back yard, hike off to the nearby woods, visit the mall, hang out at the pool, and explore the streets of your neighborhood? And by yourself or with your equally inexperienced peers, so you can feel a sense of wonder and not have everything explained to you by parents, let alone have your process of discovery cut short by their meddling.

In fact, some of the strongest memories I have that bind me to the neighborhood where I grew up are not exploring the streets along the sidewalk, but the places in people's front yards and back yards that we used to wander all over. If our parents had been there, they might have told us to get out from behind the neighbor's hedge -- but hey, that was the best place to ambush someone during a game of war.

And we used to cut across three or four neighbors' back yards at a time. Again, something that our parents would probably have told us not to do, but which gave us the sense of belonging to a more intimate or private side of that family's space. Not like we were doing property damage or anything. Just seeing a side of that family that you ordinarily wouldn't. What's the harm in a little trespassing if you wind up feeling closer to the people who live there?

...But enough reminiscing. The point is that the '80s and early '90s saw the peak of this kind of upbringing, and it's had a lasting effect on those who were in their formative years -- not helpless or house-bound infants and toddlers, but kids. Our sometimes overly nostalgic generation feels the closest bonds to the people and places where we grew up, and feel like it's a desecration to shove those aside for pointless progress, which only destabilizes the glue that held that world together -- norms, customs, styles of interacting, and so on.

To provide a concrete historical case that should give Gen Y some hope -- consider the fate of second-wave feminism, i.e. the Gloria Steinem movement of the early-to-mid-1970s. That was almost entirely a movement for sheltered airhead Silent Gen members. Two women helped to kill it off from mainstream acceptance, one from the liberal and one from the conservative direction -- Betty Friedan, who attacked it as too lesbian-oriented and too radically beyond women getting jobs and getting paid, and Phyllis Schlafy, who spearheaded the movement that stopped the ERA dead in its tracks. (That's the Equal Rights Amendment.)

Both were born in the first half of the 1920s, so in relation to the trend in the crime rate, they were like those born in the first half of the '80s. The Roaring Twenties was well before all that Dr. Spock bullshit from mid-century childhoods, and the Go-Go Eighties was well after its heyday (and before its recent revival). Growing up in such unsupervised and un-Taylorized times gave those generations the autonomy to explore all of the people and places of their community, and to feel viscerally bonded to them in a way that logical explanation without immediate experience is impotent to achieve.

It takes that deep level of belonging -- and the later profound sense of alienation when the norms degrade -- to motivate people to stop fucking around and confront the norm-destroyers head-on.