In the comments to an earlier post about the degradation of romantic comedies into chick flicks during falling-crime times, someone mentioned the rise of a certain type of chick flick that I hadn't thought of -- the female bonding movie. That's probably the most extreme example of a cultural work that depicts sex segregation. 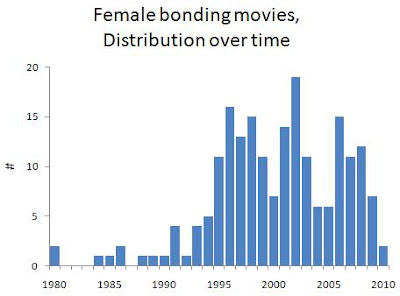 There is a consistently low level during the high-crime times of the 1980s and very early 1990s. After the crime rate peaked in 1992, the culture began sissifying itself, and part of that was the re-segregation of the sexes, as I explained in the romantic comedies post. It's like after the end of the Jazz Age (another piece of soaring crime history), when females began to shut themselves in the kitchen and felt more like vacuuming the living room carpet in high heels rather than driving cars around to look for boys, dancing to wild music, and smoking and drinking. Sure enough, the recent falling-crime period is when this sort of movie exploded in numbers.

The picture would be more accurate if I weighted each movie by how much money it brought in at the box office, adjusted for inflation. That would tell us how much money people paid in a certain year to see this genre in the theater, not just how many such movies were made. But that's extra work, and the picture is already clear.

These movies are one counter-example to the tendency during falling-crime times for people to become infantilized, as they perceive a safer and more predictable world and put everything off until much later. Even pre-pubescent girls have some interest in boys -- especially like the ones I went to school with when crime was soaring, but even the ones today. No, the social world inhabited by the characters in these female bonding movies is more like that of a post-menopausal woman -- not wanting much excitement, seeing only a small number of people socially, and all of them females instead of noisy, smelly, and bothersome males. Again, even elementary school girls want to mix in with the boys to some degree, even though they too think we're made of slime and snails and puppy-dog tails.

Another big reason why females bond a lot more during falling-crime times is that they've abandoned their promiscuous ways from rising-crime times. It's hard to bond when you're competing more aggressively for male attention, but easy when you respect each other's claims on who belongs to who.

But just wait till the crime rate inevitably enters the upward phase of its cycle in the next 5 to 25 years, and girls will realize that they can't get through real life by sequestering themselves away from boys, and that it's not enough to just keep a few gay pet-friends. Plus we'll happily see an end to these menopausal group-hug movies and a return of out-of-control girls eager to play with the boys.