The great stagnation of inventions, in two charts

Tyler Cowen wrote an article about stagnant growth in the standard of living for people in the developed world, which he develops at greater length in an e-book that I have not read, called The Great Stagnation (link in the article). If you search the Marginal Revolution website for "TGS," you'll find lots of links to responses to his overall thesis, namely that sometime in the mid-1970s the dizzying growth in our standard of living that began with the industrial revolution had started to plateau.

I have not read all of them, but have browsed them, and read a fair number of comments in those posts. A lot of the focus is on technological innovation, admittedly just one piece of how well we have it, but still an important one -- and certainly a more easily quantifiable one. Cowen's critics grasp for recent examples of new gadgets that are surely just as dazzling and enriching as yesterday's doodads were.

However, nothing that I've read has made that explicit comparison -- is the iPhone really as revolutionary, against the recent background, as the telephone was, against its recent background? No way, Jose. Most techie geeks, like geeks in general, are completely uninterested in history, and so lack any frame of reference for today's stream of novel doohickies. It should be obvious, and Cowen in that NYT article even points out several such improvements in the standard of living that totally swamp the adoption of the internet or Skype or containerization -- electricity, the automobile (the railroad for that matter), and so on. Always seeking shelter from the real world, techie geeks are incapable of appreciating how much greater life became after the introduction during the 19th C. of something as seemingly mundane as matches.

To quantify the obvious, I went to the book 1001 Inventions That Changed the World (see the link for details on who wrote it and their methods, or pick up a copy). I tallied the number of inventions important enough to make it into this book and smoothed these data with a 10-year moving average. For most of recorded history before the industrial revolution, there's a very low and steady rate of inventions made each year, so I only plot from 1700 onward (click to enlarge): 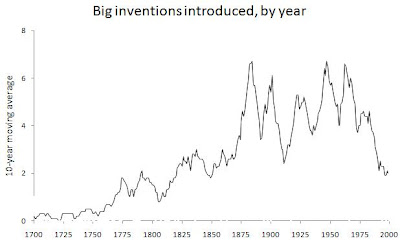 You can clearly see how runaway the rate of invention was when the industrial revolution got going. However, even by 1900 that rate had leveled off -- the peaks after 1900 are not taller than the one around 1880, and the troughs are not consitently or substantially higher than the one around 1890. Still, you can see a mini-boom in inventions from about 1920 to 1970 -- the age of the transistor, the computer, and most of the things we consider hi-tech. There is also a very clear steady downturn starting around 1985 -- probably not coincidentally after Bell Labs, a powerhouse of 20th C. invention, had to close down when AT&T was busted up.

As Cowen mentions, even during periods of long-term increase in inventions, there are still cycles up and down around that trend. Nevertheless, it looks like even that secular trend upward has been reached by now, and we will only be cycling around that plateau level.

By the way, the recent decline cannot be blamed on it taking awhile to recognize monumental inventions. First, there are decline periods far into the past as well, so we don't need to appeal to a "blindness to recent inventions" bias. Second, the bias obviously goes the other way -- techie geeks who compile lists of the Top 100 Awesomest Inventions always over-hype the very recent past. Therefore, such lists will always give a fair number of false positives for the recent past -- declaring something important when it will turn out to be trivial -- but never a false negative -- overlooking something that is earth-shaking.

Another way to understand it is to ask, How far would we have to zoom out in time in order for The Great Stagnation to disappear? Instead of lumping inventions in year-by-year bins, I lumped them into decades -- still the recent decline shows up. How about half-century bins? Now there is no recent downturn, but a plateau effect still remains. 75-year bins? No again. Only when we look at how many inventions were made per *century* does the growth look as strong during "recent" times compared to the next-most-recent times (i.e. growth during the 20th compared to the 19th C.):

If you squint, you can see that even here the slope is a little shallower for the most recent period than the next-most-recent period, but it's close enough to declare no plateau, let alone a decline, in recent times. However, this is not what the critics are arguing -- that 20th C. growth was just as impressive as 19th C. growth. They're trying, and failing, to show how frenetic growth has been during the past several decades compared to the earlier decades.

A final, non-quantitative way to think about how little things have changed in the big picture since the 1970s or '80s is to do a thought experiment: think of some invention after the cutoff year and ask how radically it could have changed history if it had been introduced 100 or however many years ago. Then do that for an invention a bit earlier than the cutoff date. Better yet, take a handful of inventions on either side, then compare which set could have more dramatically altered the course of history. Sending cell phones into a world with only landline phones (not even cordless ones, without answering machines, and without the ubiquity of pay phones for on-the-go communication) would not change things as radically as sending the telephone into a world with only letter writing and no high-powered means of transportation to deliver them.

Or imagine traveling back in time and showing the average person what shiny new toys you've got in the future, and ask how amazed they would be. Even as recently as 1985, when Back to the Future was made, someone living 30 years earlier would have been astounded by a portable music player (or "personal stereo," as Walkmans used to be called) and a camcorder, which Doc Brown calls something like a portable television studio. (This would be even more dramatic by sending 1955's technology to a 1925 consumer, of course.)

But then take something fairly common from 2010 like a phone that can take pictures on-the-go and show it to someone from 1980 -- meh, that's kind of neat, but we can already make phone calls just about anywhere and anytime we want, and we already have affordable cameras and even instant cameras. It's a cool improvement, but we were hoping for flying cars, X-ray specs, virtual reality -- something in the realm of "just imagine the possibilities."

There's a lot more to say about the topic of stagnation since the '70s or '80s, and you can search this blog for "Malthusian" to find some relevant earlier posts. But the rate of trailblazing invention isn't too hard to quantify, making that prong of Cowen's argument a rather open-and-shut case. Still it's worth illustrating with graphs and qualitatively since most people who get worked into a tizzy over the stagnation idea have no conception whatsoever of what life used to be like much earlier than when they were kids.