Here is the prevalence of the term "play date" in Google's digitized book library (restricted to American English since this seems to be an American phrase), and here is the same from just the NYT: 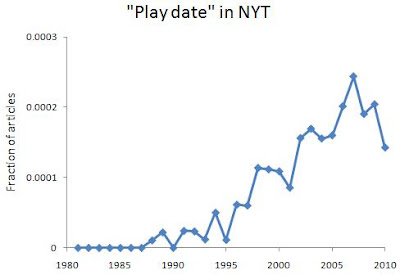 The first time it appears in the newspaper of record is 1988 and takes off after that. More or less the same pattern shows up in the Ngram data.

When I first started cataloging the trends related to the crime rate about a year ago, I noted that most of the ones involving a retreat from public spaces happened before the crime rate peaked in 1992 -- more like the late '80s. For example, video game arcade revenues peaked in 1988 and went into steady decline afterward; park attendance steadily fell after the late '80s; how much people trust others (as reported by General Social Survey respondents) peaked then as well. So here's another example -- parents started removing their kids from an unsupervised world several years before the crime rate peaked.

In large part, it is this retreat from the public sphere, and locking yourself and your family indoors, that causes the crime rate to plummet. After all, if you're not out and about, then impulsive, opportunistic criminals cannot target you or your property like cars, cash, shoes, etc. They would have to plan it all out in detail far ahead of time and travel who knows how far to get you, and that's antithetical to an impulsive mugger or rapist. And with everyone locked indoors, there are far fewer people who can step on each others' toes at a bar (or wherever) and gradually escalate it into a brawl or murder.

As someone who was part of the last generation to grow up without micro-managing parents, I find the concept of a play date not only silly but bewildering. I get that parents are paranoid and want to keep their kids out of public spaces, but it's worse than them merely limiting the amount of time that kids can spend unsupervised -- even when they are allowed to go over to a friend's house, it has to be scheduled sometimes weeks in advance and monitored all the while by grown-ups. When I was in elementary school, it was no more complicated than:

Often my mom wasn't even home to be notified -- either at work or MBA night classes -- but I went out anyway, never leaving a note or anything silly like that. If she got home and didn't see me there, obviously I was at a friend's house, at the park or the pool, hanging out at the mini-mall, or something else not worth worrying about. I'd only call home if I got invited to stay for dinner, so she could take that into account when making dinner back home.

Browsing through some of those NYT articles, several things strike me as particularly depressing about kids' lives once the helicopter parents got going:

- Although some of the kids profiled are 2 or 3 years old, where play dates may make sense since they can't even speak fluently yet, a good fraction of them were 8, 9, 10, and even 11 years old and in sixth grade. When I was 10, me and my friends roamed the neighborhood streets with no supervision as part of our summer job -- yep, just out of fourth grade and already working for a living. I really wonder about these third and fourth graders who require play dates to see other people their age -- do their parents still wipe their asses for them too?

- On the whole, the Millennial kids are not pushing back against their helicopter parents. It would be sad enough if the parents were doing what they've been doing, but it's much worse to see kids just sitting there and taking it. They clearly share a good deal of the blame, buncha pussies. Not that parents were hyper-controlling during the '60s through the '80s, but do you know what we did when they went too far in restricting our freedom? -- we disobeyed them! And sure, maybe we sometimes went too far in disobeying them, but that boundary line of what's right and wrong can only be figured out by trial-and-error on both the kids' and parents' side. It's not something like the multiplication tables or the ABCs that can be neatly distilled and packaged for the kids to absorb -- they have to make their own decisions, some of which they may regret, in order to learn where the boundaries of acceptable behavior lie.

- Play dates make kids even more reliant on their parents as a means of transportation. If two kids want to hang out, they usually set up something loose like "after school" if they plan it during recess, or "in a little bit" if they plan it over the phone. Even if they set a precise target like 4:00, there's no real penalty to the one going out if he shows up late, and the host kid won't be put out. Hey, they're just kids; they don't believe in promptness. Their parents, however, do, and the one sending out her kid would be mortified if he showed up late -- she might as well be tardy herself. Wanting to avoid this embarrassment and resultant shunning at all costs, she insists that she chauffeur her kid over there, rather than allow him to get there by himself.

Whenever I wanted to go to a friend's house, all I did was hop on my bike and since everyone lived within a 10-minute ride, it was no sweat off my back. During the past 15 to 20 years, though, letting kids ride their bikes would only encourage their independence, so that had to go. Awhile ago I showed how bike riding had changed (during the late '80s / early '90s) from something that young people did to something that 20-something SWPL types and middle-aged endurance dorks took over.

- Childless yuppie couples have extended the play date idea to their own substitute children, namely their pets. (Dogs only; cats have too much dignity to be subjected to this manipulative crap.)

Just think about it -- at some point these bubble boys will be running the country, both the government and businesses, and then we're really fucked.