The dissolution of the romantic comedy and the spread of the chick flick: A case study of growing male-female segregation

Males and females relate more closely with each other -- sometimes non-sexually -- when the violence level begins to soar, whereas they pull apart from each other when the world gets safer. Some examples of this pattern that I've detailed before are that young people have more sex-segregated social circles since roughly the mid-'90s, they don't mingle with the other sex very much even where they're supposed to like a house party or a dance club, many girls' only male friends are gay, and they use phrases like "bros before hoes" or "we came together, we're leaving together."

During the '60s through the '80s, it was the other way around, and it wasn't just that guys began hounding a bunch of unwilling females into hanging out -- those girls were incredibly boy-crazy and wanted to spend lots of time around boys. In rising-crime times, girls have a greater need for male protectors, they become more promiscuous, and they have a higher level of excitement-seeking, which requires that they hang around boys more -- girls being the boring sex. Naturally the guys are only too happy to oblige them.

I have a hard time explaining how closely overlapping boys' and girls' culture used to be during dangerous times, and how separated they are now. One easy way out is to just show them movies, TV shows, or whatever, from both eras and look at how different the portrayal of reality is. In teen comedies, there is only minimal sex segregation in Fast Times at Ridgemont High (1982), Weird Science (1985), and Saved by the Bell (1989-'93); a good deal of it in Dazed and Confused (1993), and Clueless (1995); and near total segregation in American Pie (1999), Mean Girls (2004) -- minus the gay friend, who doesn't count as a guy friend -- and Superbad (2007).

A more convincing, although less vivid, way is to look past the portrayal of boys and girls hanging out together or remaining apart, and ask whether the males and females in the audience -- real people -- were brought together by the movie or not. Of course, war movies are designed for males, and hey-world-getta-loada-me movies are meant for females (and gays), so we have to find a genre that could at least potentially bring the sexes together. That is the romantic comedy -- there's enough raunchy or slapstick humor, and maybe even some action or adventure, to keep the guy happy, while for girls there's enough focus on social relations, sharing feelings, and triumphing over that other jealous ugly bitch to snag the dream guy.

Before getting quantitative, even the most fleeting glance at romantic comedies from the rising-crime times of 1959-1992 vs. those from the falling-crime times of 1993-present throws their differences into stark relief. Indeed, the more recent examples of the genre are more appropriately called "chick flicks," a phrase that doesn't even show up in Google's vast archive of digital books until the mid-'90s (the first instance in the NYT is 1995). I don't know what the guy-oriented versions like Knocked Up are called -- doofus comedies?

At any rate, these types that are so strongly geared to one sex while making the other gnash their teeth were virtually unknown among the popular examples from rising-crime times, right up through When Harry Met Sally in 1989 and even My Cousin Vinny from as late as 1992. There's only one great romantic comedy from falling-crime times, and it only missed the cutoff by one year -- 1993's Groundhog Day (perhaps the best example of the genre). It's also important to remember that in the later part of the 1970s and '80s, a lot of hit movies successfully combined a variety of genres in a way that has totally died during falling-crime times. So there are a lot of romantic comedies that you might not recognize as such, given that the primary genre may be action or science fiction -- Ghostbusters, The Karate Kid, Back to the Future, Stripes, Spaceballs, The Princess Bride, and even Labyrinth to some extent.

Now for some hard data. Box Office Mojo has a romantic comedy category sorted by how much money they made, not adjusted for inflation, which makes most of them recent movies (at least at the higher ranks). So rather than look at all nearly 400 entries, most of which would be made after 1992, I took the top 50 from the earlier 1979-1992 period and top 50 from the later 1993-2010 period. This makes the sample sizes equal, and it allows both periods to showcase their best -- or at least most popular-at-the-time -- examples.

Using box office revenue to select which movies to include is better for our purposes than to use something like critics' ratings. I'm making a claim about what resonated with people, and what was widely consumed, not necessarily what critics like the most. To see how well the movies appeal to males and females, I took the average score for each sex at the IMDb website. Below I show the change in the distributions for these scores separately by sex, for the male-female difference, and the change in the male-female correlation.

First, how each sex rated movies from the two time periods. Females are the left two graphs, males the right two. The rising-crime period movies are on top, the falling-crime ones below. I multiplied the 1-10 scores at IMDb by 10 to make it easier for me to enter into Excel (no decimal points). 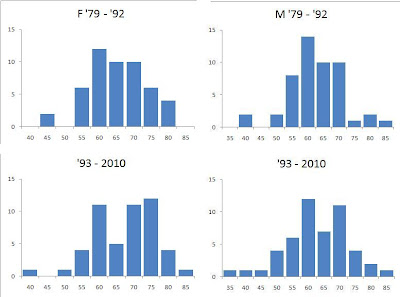 The average male score did not change (60.4 to 60.6), while the average female score did somewhat (63.4 to 65.1). If anything, females have benefited more on average from newer romantic comedies. Also look at how much wider the distributions for both sexes became -- there are a lot more movies that males rate really high and really low, and the same for females. That suggested to me that those rated really high were geared toward one sex (the one that rated it really high) and bored or disgusted the other sex (the one that rated it really low). That would predict that the male-female differences would be larger for the recent period.

Sure enough, that's just what happened. Here is the average female score minus the average male score, which shows how female-oriented the movie is: 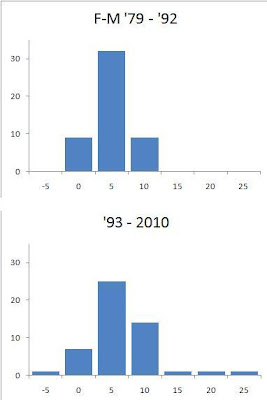 The average F-M difference from the earlier period is 3.0, and 4.5 from the later period. That may be only a 0.15 difference in the original 1-10 scores, but it's still there. Also look at how much wider the later distribution is: compared to zero instances from the earlier period, there are a good handful of movies that females rate on average 1 or 2 points higher on the 1-10 scale, as well as a few that males rate higher than females (unusual for the genre).

Another way to see the greater divergence is to look at the correlation between male and female scores for a given movie:

The points in the earlier period are much more tightly bunched around the line of best fit, meaning that you could almost perfectly predict male scores from female scores, whereas there's a more noisy relationship in the later period. The correlation for the rising-crime period is +0.95, while for the falling-crime period it is "only" +0.88 -- still very high, but at the same time showing how males and females agree less than they used to about how good a romantic comedy movie was. Also remember that even small differences in the average can have big effects in the tails of a distribution, like movies that are very polarizing.

The red line tells us what the predicted female score is, given how the males scored it. Look at the right side of the red line -- this is where males scored it above-average. If the dots are above the line, that's good news -- females liked it even more than expected -- while if they're below, that's bad news -- males like it a lot and females don't really dig it. Then look at the left side of the line, where males scored it below-average. If the dots are below the line, that's good news -- females also thought it was terrible, but were even harsher -- while if they're above, that's bad news -- males hated it and females liked it.

There isn't very much bad news in the earlier period, which agrees with everything else we've seen -- romantic comedies brought the sexes together. But look at the later period: out of just 50 movies, there are 3 big outliers. One of them, Norbit, is scored equally poorly (3.7) by males and females. But the other two are ones where males were put to sleep while females at least stayed awake or even liked them -- Sex and the City 2 (no surprise: 3.5 among males vs. 5.3 among females), and, yep, Sex and the City the first one (4.8 among males vs. 6.9 among females). The data do not lie -- that whole franchise embodies just about everything that's gone to hell in male-female relations.

Every way of looking at the numbers shows the same overall picture: while romantic comedies used to be an agreeable common space for guys and girls, the plummeting level of violence has predictably driven men and women farther apart, with most of the gains going to females. The fact that we have no phrase for the male version of a chick flick tells us how less common a male-oriented romantic comedy is compared to a female-oriented one.

Don't get me wrong: I'm not going to agitate for more male-oriented romantic comedies just to "even the score," like those insecure ads from Burger King or the Miller Lite man laws campaign. In fact, anything using "man" as an adjective proves how castrated it already is -- you don't need to refer to a '78 Trans Am as a "man car" because it speaks for itself. Only something limp like a messenger bag stands in need of a defense like being called a "man bag" or "man purse."

No, I've been sick of the segregation of the sexes ever since it began in the early-mid-'90s. It began as a heated war that cooled into mere isolationism, but it's all the same to me and anyone else who remembers how much boys and girls used to play with each other, when the world was still growing more dangerous and unstable and uncertain. I'll only be happy again when we return to that carnivalesque thrill of co-mingling -- Leslie Burke, Pat Benatar, Kelly Kapowski -- not if guys end up winning some tiresome battle of the sexes. Although even that would certainly be better than today's world where the mixed-sex spaces like romantic comedies, which used to please both guys and girls, have become biased toward the more boring sex.