Looks matter most to young girls, even in a long-term partner

In the comments to the post below about hair, Dahlia and Rob brought up the question of whether male attractiveness is about looks or wealth-and-status or something else.

In just about every popular writing within the broad framework of evolutionary psychology, as well as within the specialist journal articles, the writers always play down how much male looks matter to girls. The only exception is if the female raters are beyond their peak years of reproductive value, which are roughly the later teens and early 20s.

When older women rate, they value looks less and wealth-and-status more. That story fits with what's familiar to readers over the age of 25 or so, and readers don't want to hear something they didn't already believe, so that's the story that gets told the most. No one wants to be reminded of what the mating market was like in middle school, high school, and college.

When it is these younger females who rate, as is the case with just about all studies published in journals (usually undergrad students in Psych 101), virtually nothing matters except for a guy's looks. I thought about collecting examples from a bunch of studies, but because there are so many, I'm just going with the most recent one I read for a seminar. *

The authors wanted to see if females (whose average age was 18.4) preferred the faces of males who had higher testosterone levels, as well as the faces of men who really liked infants. The idea was that they would prefer these guys in different contexts -- the higher-T guys for short-term partners and the infant-loving guys for long-term partners. That hunch was borne out, making a novel contribution and advancing our understanding of bla bla bla bla bla. But when you look at their findings, all of that stuff was overwhelmed by the effect of how good-looking the guy's face was: 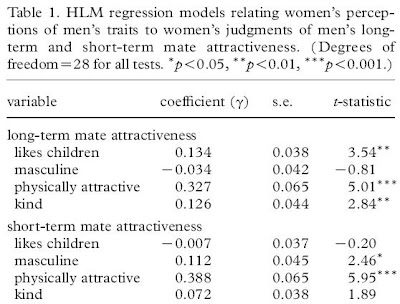 Under "short-term mate attractiveness," we see that whether a girl, after looking at a guy's face, rated him as liking children or kind made no significant difference in his value as a short-term mate to her. Although it didn't hurt either. If she perceived him as masculine, that bumped up his short-term mate value. But the strongest factor is whether she found him physically attractive -- the effect size is over 3 times as large, and the p-value 2 orders of magnitude smaller. Well, sure, no big surprise there -- if she's just going to be with him for a brief affair, why bother judging him on anything other than his looks and masculinity?

Here is where most people's painful memories of high school come flooding back. Look at the upper half of the table. Under "long-term mate attractiveness," we see that masculinity drops out as a predictor, and now being kind and liking children make a difference, each about as strong of an influence as the other. So far so good, but then look at the "physically attractive" predictor -- it's more than twice as strong as being kind or liking children, and the p-value is an order of magnitude lower. So even when she is selecting a long-term partner, a college babe is choosing more based on looks than that other stuff.

And it gets better -- compare the strength of the effect of looks in the long-term vs. short-term lists. It's only slightly stronger in the short-term case (0.388 vs. 0.327), and it may not even be a significant difference (they didn't test that idea). So it's not just that "looks matter" in a long-term mate -- that's not so hard to believe -- but that their power is only slightly dampened compared to their force in determining who makes a good Spring Break fling.

I stress that results like these are entirely typical. (Someone in the seminar suggested that the looks variable is so much stronger because it's just a lot easier to tell who's good-looking from faces, whereas kindness and liking children are harder to read from faces. A possibility, but not likely when we see that the "all about looks" interpretation is supported by every single adolescent's own real-life experiences.)

Two interesting questions suggest themselves, although they are never discussed in these articles or newspaper reports or blog commentaries or whatever:

1) Why do looks matter so much to girls when choosing a long-term mate? That would seem to be something good only for short-term mating, where good looks signal good genes that she wants to get for her unborn child and then move on to get some other guy, a fatherly guy with lots of resources, to raise it.

2) Why doesn't anyone talk about these results, or why do people only want to hear the story about male long-term attractiveness being mostly a matter of his wealth and status, not looks?

Going in reverse order, most academics and their audience -- people who read Thinking Books -- were total losers in high school and college. Being plain or ugly, the guys never got much attention and are still bitter and resentful about being overlooked or rejected by "the superficial cheerleader" type -- in reality, any girl he ever had an interest in. If he can just block that part of his life out, then he'll see only the part where wealth and status do matter, namely when looking for women much beyond their peak reproductive value. And since these guys make a decent buck and aren't at the bottom of the status totem pole, it boosts their own self-esteem to think that wealth-and-status is what drives women crazy.

Why do women writers and readers go along with this lie? They may get some slight self-esteem boost, as though they're somewhat embarrassed for having been so caught up in a guy's looks when they were younger. But they can't get that warm of a glow. I think they just want to keep their male age-mates believing what both perceive to be a harmless and even beneficial lie. And not just for selfish reasons, like "Don't let them know how we work!" Rather, if women remind men that, among the females who matter most, looks swamp just about everything else, that could open up old wounds and cause a rise in mistrust or cynicism between the sexes. If everyone pretends that it's all about being a go-getting breadwinner, then men and women get along better.

As for why looks matter so much even in a long-term mate, we know that attractive people are more symmetrical and so probably have "good genes," ones that are better at withstanding the slings and arrows of outrageous fortune as we're developing. And this symmetry is heritable, meaning that one person being more symmetrical than another is partly a function of genetic differences between them. If a woman wants the best genes for her child, she'll try to get pregnant by the more symmetrical guy, regardless of whether he sticks around to provide for the kid or not. That's the short-term value of good looks, and it's the only one that people talk about.

But for just about all of human history -- probably everything before men worked in a service economy within industrial capitalism -- being able to do well as a dad involved lots of physical activity. To earn a living, he was a hunter, a herder, a farm-worker, or a wage laborer who worked a lot with his hands and body. He had to physically protect his social circle and perhaps go off to fight others. Plus, playing with children and showing them the ropes of growing up is intensely physical, as any parent knows who's been worn out from chasing their kid around the house or the yard.

So, even in their role as paternal providers, males almost always had to be in good shape and full of energy, hence good genes would benefit him even outside of the one night stand. That's why young girls are so taken by a guy's dreamy looks even in the long-term case -- they want a promising forecast of how able he'll be to hunt, herd, plant, play, and fix stuff up farther on down the line. If he looks busted up now, he won't be able to do any of that stuff later on.

It's only in very recent times in the developed world where being a good provider became possible even if you weren't in good shape and weren't terribly energetic. Just take the customers' orders, don't mouth off to the boss, and you'll get a steady paycheck that can go toward caring for your wife and kids.

It's odd that the solution to the paradox is a standard one in evolutionary psychology -- that we live out-of-touch with the environment that we evolved in, and that we need to pay closer attention to what life was like then and there. You'd think this would make the pattern clearer to see.