Were beer ads always this doofusy? 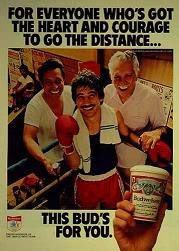 While watching the Super Bowl commercials, I wasn't surprised by the level of stupidity, given that the infection of meta-irony spread to advertising as elsewhere in the culture. The only exceptions I noticed were for low-end cars, hi-tech -- though not consumer electronics -- and Coke (whose non-ironic slogan is "Open happiness"). Everything else was just a variation on those lame self-aware Orbit gum commercials. By the way, Megan Fox making a duckface for her camera -- minus 10 points.

The worst offenders by far were the beer commercials, half of which you could've mistaken for Will Ferrell movie trailers or public service announcements for Betaholics Anonymous. These are the only kinds of beer ads I've ever known, but then I wasn't of drinking age in the pre-ironic years, so I wasn't really paying attention then. Fortunately YouTube gives 354 results for "80s beer commercial". 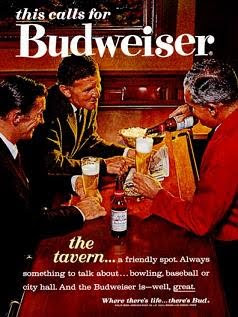 Here is a montage from the '60s to the '80s -- nary a doofus ad to be found. Many, including this ad for Stroh's, focus on friends and family getting together and having fun, not a bunch of dorks who have no life. Several others, like this one for Busch, make a sincere congratulation to strong men who accomplish tough jobs, not an ironic wink at drone males who use alcohol to numb awareness of their weak and faggy behavior.

Beer commercials used to appeal to men's pride -- "this Bud's for you" -- but now they tap into their shame. Don't blame the ad companies, since they're just supplying the demand of fragile crybabies. Meta-irony avoids a sincere look at their lifestyle that would reveal what a joke it is, although you'd think then they'd buy more beer. People drink more to escape shame than depression.