A snapshot of the nascent Valentine market in 1860s New York

Once the Industrial Revolution got going into full swing during the second half of the 19th C., all sorts of new markets sprung up that could not have thrived before. We tend to think of the products sold in these new markets as fashioning minerals into heavy machinery, or harvesting grain more efficiently -- things that would make it easier to solve the pressing problem then of not starving. Contrary to the idea behind Maslow's hierarchy of needs, people did not sit around waiting for their myriad physiological and safety concerns to be taken care of before forming markets that would serve their social and esteem-related desires. One such case was the burgeoning market for buying and selling Valentines, which obviated the need to make them yourself from scratch.

Here's a data-packed little article on the trade in Valentines from the NYT in 1867. It mentions that the most popular type -- and the cheapest -- was the "comic Valentine," a collection of which you can browse through here. They were the Shoebox Greetings cards 50 years before Hallmark was even founded.

Using the NYT article and estimates of the population of Manhattan, I came up with the following trend in the number of Valentines posted and delivered per capita. Even by 1866, one Valentine was posted to every tenth resident of New York, up by a factor of 5 from even a few years earlier. This doesn't count those that were bought but weren't delivered through the Post Office, so that's a lower bound. 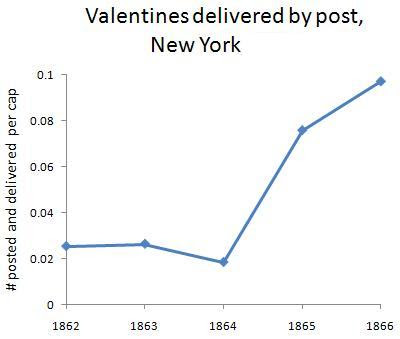 And despite how relatively new this industry was, there wasn't just one or a handful of cards to choose from: there were 23 different price-points, from 3 cents to 100 dollars. Again using the NYT article, below is the demand curve for cards made by a firm headquartered in New York. A straight line through a log-log plot shows that price is a power function of quantity sold (this power law relationship accounts for 98% of the variation in price). In particular, the predicted price where only 1 Valentine could be sold is $275, which in 2008 dollars is $4185. I think we could easily beat that today because demand has shifted up as we've gotten wealthier. 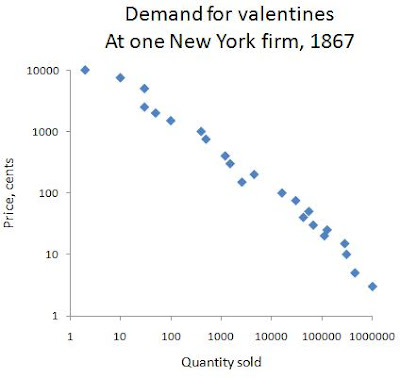 The NYT writer estimates that enough Valentines were produced overall to send one to every fourth American citizen. Hallmark research suggests there are 180 million Valentines exchanged, which means that there are enough for 3 in every 5 Americans -- more than double the rate of 1867. Again the growing participation in this market likely reflects our greater wealth, even though before Valentines were hardly available only for the well-off.

It's great that industrialization and fairly competitive markets have given us meat, eggs, and cheese at prices low enough that most people can afford a healthy and tasty diet, unlike agricultural peasants who must subsist on bland and nutrient-poor grains and vegetables. But often new markets allow us to consume things we could not have before, not only things that merely do a better job than things we already have. Who will stay in touch and send a token of their affection to many people in their social circle if they had to make the paper for the Valentine themselves, let alone craft the scissors, design a printing press, and so on? And again, this new stuff is not just some novel combination of minerals that will make the roof over our head more sturdy, but something that allows us to enjoy richer social lives and to more easily receive the esteem of others, which -- if we've earned it -- is more satisfying than to get to play around with the most dazzling new gizmos.