Are writer-director brothers the result of lower trust?

The writer-director brother act is relatively new in Hollywood history. Before the Coens emerged in the 1980s, the the only fraternal writing team I can think of were the Epstein identical twins (Casablanca). (There were acting teams like the Marx Brothers, and lots of brothers in various roles behind the scenes such as the Warners and the Selznicks.)

Since then, there have been frauteurs like the Farrelly, Wachowski, Wayan, Hughes, Weisz, and Polish Brothers. My guess is that the modern writer-director job often tends to be too hard for one individual to do, so brother pairs have flourished.

But why should this duo be blood relatives rather than two unrelated people?

These are different from brothers who act or play music together since writing and directing movies is much more managerial. When the costs of transacting in the market go up, people will operate more in firms and contract less with individuals. One huge cost of transacting is lack of trust, so when people have less trust in others, they'll work more in firms that don't include strangers. That leaves more or less the close family. Immigrants from low-trust societies form family businesses rather than write contracts with a variety of total strangers. So perhaps the same is going on for people who run the making of movies.

Here's how the level of trust has changed among males with at least 13 years of education, according to the GSS. It wobbles around during the '70s and most of the '80s, but it starts steadily sliding in 1988. 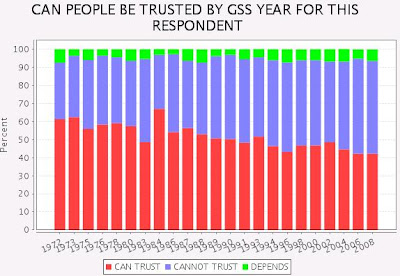