On the impossibility of sympathy in today's culture

Does anyone know how to make a normal face anymore?

I'm not talking about people who aren't photogenic, but about the majority of people who think it's cool to contort their face into a kabuki mask whenever a camera is pointed at them. All of your friends do it in their Facebook pictures. Will Ferrell and company do it on the cover shots for their movies. And just to show that these are due to huge audience demand rather than some fringe fad, here are thumbnails of some of the most popular and most watched videos on YouTube right now: 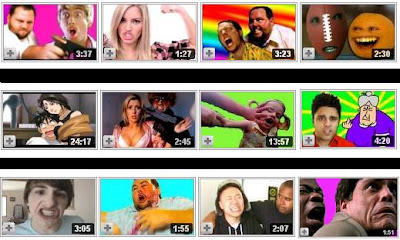 Whether it's human beings (and across all demographic groups), cartoons, or anthropomorphic fruit and footballs, everyone has become incapable of wearing a real emotion on their face. Obviously this phoniness is part of the larger decline in sincerity that the culture went through starting around 1992 or so. Every facial expression you see is so overly exaggerated.

As Adam Smith details in the Theory of Moral Sentiments, being able to sympathize with another person -- in the sense of feeling what they feel, being on the same wavelength, etc. -- typically requires that the other person dial down their emotional intensity. Why? Because we are not them and therefore discount their feelings to reflect the fact that their causes are not affecting us. When you bang your knee on the desk, don't expect anyone to sympathize if you start howling -- after all, their knee is fine. Show some restraint, and they'll actually be able to meet you emotionally and will try to help you out.

That's why it's so difficult to get into most pieces of pop culture now -- if the person not only refuses to lower their emotional intensity before their audience, but actually ratchets it up to grotesque levels, they are going to find no sympathy from most people. The only ones who can sympathize are those whose life is as miserable as it is for the singer of Limp Bizkit or whatever other bunch of screaming dorks that will be popular tomorrow. Everyone else is going to shut that shit off because it's asking too much of normal people to feel what the band feels.

It's not that there can't be an intense emotion, just that the context should make the audience able to easily enter into that emotion. It's typically easier to feel sympathy with someone experiencing a positive rather than negative emotion, for example. That's why of the original punk rock bands, the ones who did the best then and now have been the less splenetic ones like The Ramones and The Clash. Even among the negative emotions, it's easier to feel sympathy with someone who's sad rather than upset.

If it's impossible to be on the same wavelength as these bozos, why are these expressions in such high demand? We have switched from valuing entertainers who coordinated the audience's sentiments to be on the same wavelength for an extended period of time, like cheerleaders and mascots during a sports game or black pastors leading the congregation in song and movement. Now we value entertainers who get a reaction out of us for a moment or two and then let us go on to whatever we were up to before, like the flashers you might have seen in Times Square in the '70s. (I think they locked up the wrong class of flashers.)

In comedy, we now worship the 7 year-old class clowns -- "Go ahead Cayden, make that funny face of yours for Uncle Jeff!" While overblown silliness does get everyone in the audience to share a laugh at a common joke, and while laughter is great, the ridiculous wears thin very soon as a cause of laughter, so the togetherness is superficial and fleeting. Contrast that with the experience that the early-era Simpsons gave its audience.

In romances, we now worship the overly sappy John Mayer and Norah Jones types. It's enough to make someone (not me) say "Awww" for a moment and then drop the feeling and move on. It's musical PDA. None of that garbage sticks in your head like "Ticket to Ride," "You Make My Dreams Come True," or even the pushing-it case of "I Melt with You." And it's not just because the former lack any melody; the latter are general and restrained enough verbally that while singing it you don't feel like reciting someone's corny notes in a love diary.

And in "dramas" -- anything that isn't mostly upbeat -- we now worship the entirely personal ranting of crybabies and psychos, rather than using the personal merely to illustrate some more general condition that the audience could sympathize with. Again look at Limp Bizkit and similar groups who sound like a bunch of brats throwing a temper tantrum because their mommy didn't let them have cookies after dinner, or because the girl in the front of math class rejected them for a date. No sympathy -- gee, that's too bad for you, but now I've got to get back to my day. There's a reason that people still like The Animals, Iggy & The Stooges, and Black Sabbath -- as angry as they may sound, they found a more universal appeal by dialing down how personal they were, so they would actually make you reflect on and off about those songs over the next several days or so.

Of course the same goes for sadness. We now worship the overly emotive and overly personal whining about how unfair and melancholy life is. The emo and pop punk bands sound like this, not to mention the rebirth of the singer-songwriter: OK, so someone's whining about something -- duly noted, kinda sad, and now back to my life. The mid-'90s were the last time when mainstream rock music, exemplified by Mazzy Star, showed a detectable influence of country, blues, or soul, genres whose musicians aim to focus on the human condition more than their narrow lousy lot in life. Just about any song on the sad side that brings you into it over the long term is from that lineage -- mid-'60s Beatles, T. Rex, Social Distortion, Love and Rockets, etc.

It ended about the same time in R&B music, with Boyz II Men being the last good example. During more sincere times, Sam Cooke and Al Green could have drawn you in. Since gangsta rap has taken over black music, though, sad songs have become almost exactly like those of their whining emo contemporaries: they're just too brooding and masochistic for normal people to sympathize with.

Pretty depressing, but at least we don't have to rely on entertainment and Facebook for happiness. When it comes to generating sympathy, nothing beats doing what you're good at in front of an audience. Luckily most people are passably good conversationalists, so at least you can socialize with your friends and acquaintances. I just can't wait for the culture to turn sincere again so that we'll enjoy that extra boost of good cheer. Enough already with meta-ironic queers and their kabuki faces.