The "midlife crisis" was a Boomer fad

Quantitative psychologists showed almost right away that the idea of a midlife crisis was wrong. You can find a good review of this, along with much more excellent data on how personality changes across the adult lifespan, in Personality in Adulthood, written by the pioneers of the "Big Five" personality trait approach.

But why let data get in the way of some gratifying whining? Here's how "in the air" the idea has been since its introduction in the early 1970s: 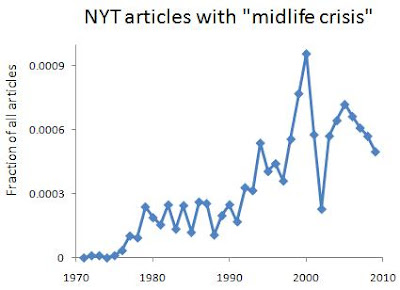 The peak year is 2000, and since they used "midlife" to refer to their 40s and 50s, that makes the peak-era believers born between 1940 and 1960 -- who else? Now that the earlier Boomers are past this stage, fewer of the overall generation are left to complain about midlife. Generation X is very self-absorbed, but more like the quietly bitter girl who thinks she's an unrecognized superstar, whose fame has been stolen by the louder, exhibitionistic older sister. So I doubt they'll be making a big stink about midlife. The silent mini-generation between Gen X and Millennials probably won't protest either. And while everyone says Millennials are attention whores, it's only natural since they're still pretty young, so it's too early to judge there. Also, it seems like more of a zeitgeist thing than a generational thing -- look at how many people well into their 20s and 30s make the duckface or other kabuki-like facial expressions in their Facebook pictures.