I have no idea when suburban sprawl is supposed to have begun -- it's a catch phrase that encompasses lots of changes, so let's focus on just one of them and see when the shift occurred.

Going through many versions of the Statistical Abstract, which collects the data from the Federal Highway Administration, I made several graphs of the average number of miles traveled per vehicle. The longer the distance that you typically drive, the more sprawling your environment is, right? The car and bus data go back to 1940, and although it's spotty during the '40s, it's complete from 1949 to 2006. The van / pickup / SUV data, and the "all types" data (with the van / pickup / SUV included), only go back to 1970. Here they are (click to enlarge): 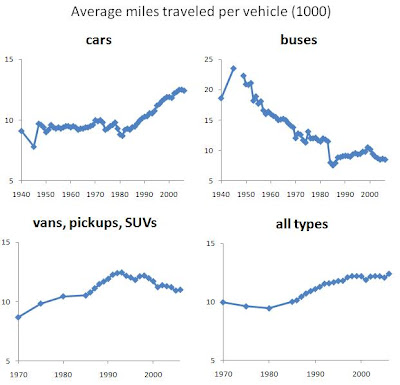 Aside from a sharp dip during WWII, the average distance traveled by cars remains remarkably constant from 1940 to 1980. Afterward, though, there is a steady increase, so that we now drive 3,000 more miles per year than we did in 1980. Again excepting the WWII period, distance traveled by buses has declined fairly steadily, although there was a slight rebound during the '80s and '90s. I don't know if this is because there are simply more buses, so that each one needs to travel less in order to serve the customer base. There are also data on total vehicle-miles traveled by vehicle type, but I'm not going to schlep through all those PDFs again just to find out. Er, what I meant to say was that the resolution of this open question is left as an exercise to the reader.

As for vans and pickups, the distance they travel increased from at least 1970 through the early '90s, but then decreased after. Accounting for all types of vehicles, we see again that it looks pretty flat before 1980 and increases steadily afterward.

There are many ways to measure "suburban sprawl," and I'll look at some others sometime soon. But at least for "having to drive longer distances," it looks like sprawl hit all of a sudden around 1980. I don't know what happened beforehand that would've caused the shift. It's not a cyclical pattern like crime, where we don't need to point to causes right before crime started going up or down (it does that because it's cyclical). It's pretty clearly stable for 40 years, and then turns steadily upward.

If you have an idea, include references or links to data that support what you say. I could list 500 potential causes, but without anything to back it up, why would anyone care? For example, if fuel prices are supposed to be the cause, dig up some data or provide a link to someone else's graph of fuel prices (adjusted for inflation) over the past 50 to 70 years.