I knew I wasn't missing much at the movies lately

As a child and teenager I went to the movies a lot -- and not only because that's where many of the big video game arcades were located circa 1992. In college, I was insulated from all of pop culture. If memory serves, I saw four movies in four years. Oddly, though, after graduating, I still went to the movies only rarely -- there just didn't seem to be anything good out. Was I the only one? Looks like "no" -- 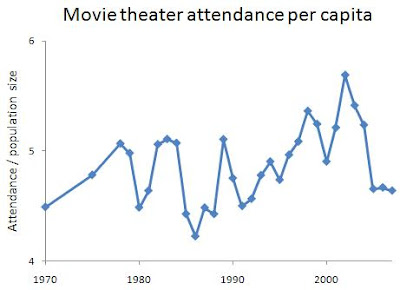 These data are pieced together from several versions of the Statistical Abstract of the United States. It shows how many movie tickets were sold, divided by the size of the population, so it says how many movies the average person saw during the year. This number doesn't change radically -- it's always between 4 to 6 movies per year -- but there is still an upward movement from the late 1980s until 2002, and a downward movement from 2003 through 2007. The mid-'80s sucked, although the late '70s and early '80s were cool.

The same is true for horror / slasher movies, another genre central to the decade. After the first Nightmare on Elm Street and Terminator movies came out in 1984, it was more or less finished.

Notice how little movie attendance responds to the state of the economy -- true, there's a dip during the recessions of the early '80s and early '90s, and there's a surge during the '90s boom. However, there's a lull during the '80s boom, a surge during the early 2000s recession, and a lull during the recent housing boom era. No real consistent relationship. That probably doesn't stop people from claiming that the masses will pile into movie theaters during hard times to escape the harshness of reality, or that people will abandon movie theaters during hard times in order to save money or to not be reminded of Hollywood celebrities. The state of the economy may affect how many movies get made, perhaps even what their subject matter is. But as far as just going to the movies is concerned, economic health predicts little.

So now I don't feel so guilty about being out of the movie loop for the past 6 or 7 years. Apparently there wasn't much worth seeing. And it's not that I sheltered myself from pop culture generally, or that I'm averse to whatever's new -- I was very in touch with rock music when it was good, around 2003 to 2005 (maybe even into 2006). It sounded great, fast-paced, made you move. TV shows from that time weren't so bad either -- I kept up with Family Guy, Project Runway, even Made or True Life on MTV.

But none of the handful of movies that I saw each year thrilled me and made me want to catch up on things. The last movie that I had a blast at in the theater was The Big Lebowski in 1998. (Well, they showed Amelie on campus in 2002 or 2003, but that was French, not Hollywood.)

I'm sure there are some good ones that I missed, but that's true for any medium in any period. On the whole, though, movie-goers seem to have sensed that movies released after 2002 pretty much sucked.