Continuing the series on how kids today have no life, let's take a very brief look at the teenage rite of passage of getting your driver's license. I have lots more data and graphs, as well as commentary, that I'll probably put up at GNXP.com sometime soon. (What caught my eye was this 2004 L.A. Times article. I've dug up all the data and made graphs.)

For now, consider only 19 year-olds (although the pattern is basically the same for under-16, 16, 17, and 18 y.o.s as well). They've had plenty of time to learn how to drive, they've been legal adults for 1 to 2 years, and they are unaffected by changes over time in their state's driving age, since no state has raised it to 20 or something. Here is the percent of the 19 y.o. population that are licensed drivers, from 1978 (when I could first find data) to 2007: 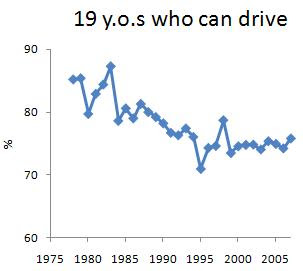 The peak year of having fun, during the time period here, was 1983. During the mid-'80s and after, fewer and fewer of the country's teenagers bothered to get a license.

We can rule out all explanations based on "substitute goods," since young people are biking less and less too. This also allows us to rule out increasing costs / insurance -- bikes can be found cheap, and you don't need insurance to ride them, yet people are still using them increasingly less. And though I don't have hard data handy, we know that they aren't walking a lot more either. We can rule out the "parental chauffeur" substitute since in general 19 y.o.s aren't living with their parents. If anything, they should be getting licenses at a greater rate since we live in a more sprawling society now compared to 25 or 30 years ago.

The common factor among less walking, biking, and driving is personal travel -- young people aren't going anywhere anymore, regardless of how they might have gotten there. Most of their social spaces have been closed down or taken over by full adults or infants. The mall is the most obvious example -- mostly for people who are no younger than 25, except for those stores supplying infant clothes, toys, etc., for parents in their 30s or older. I guess if I didn't have anywhere to go to indulge in some unsupervised fun, I wouldn't need a license either.

Still, wouldn't they at least want a license so they could drive to their friends' houses? Those haven't been torn down. They must not live in each others' houses as much as teenagers used to.

It's true that they are less likely to have a job, and so less likely to need a car for that reason. But again, what about all the other reasons that you're dying to get your license for? Let's not forget driving to school rather than walking, taking the bus, or having your mom drive you. And the male half of the population thinks -- or at least used to think -- it was required to be able to take a girl out somewhere, rather than use public transportation or having your parents drive. And forget about making out or getting laid in the back of your car if you can't even drive!

Thank god adolescence will always provide plenty of social drama to keep teenagers' lives from getting too boring. Still, what about all the other sources of excitement? While 16 y.o. girls may find it exciting enough to re-hash all of the social conflicts that have erupted during the day, boys can only take so much of that shit. Pretty soon you get restless and just want to go out and do something.

Dude, I dunno... but let's just go out and do something!

I mean, dude, if only there was something to do.