The decline of biking, and does it make bikes more hip?

Thinking more about how kids these days don't have a life, I thought of more ways to measure the change. It would be tough to find data on how often kids spend time playing outside, or what percent of the time they spend at playgrounds or parks is supervised. But there are at least two things I remember doing a lot as a kid that I don't see at all today -- riding my bike and shooting basketball at the hoop in someone's driveway. The basketball data will come soon, but for now, let's have a look at how the popularity of riding a bike has changed over the past 20 or so years.

The data are recorded in the Statistical Abstract of the United States, and they go from 1986 to 2006. (For the later age groups, the first two years used broader groupings, so in the graphs below, they start in 1988, when the finer-grained groupings begin.) They show what percent of people have gone bike riding at least 6 times in the past year. Here are the graphs for all age groups, and then broken down by smaller groups: 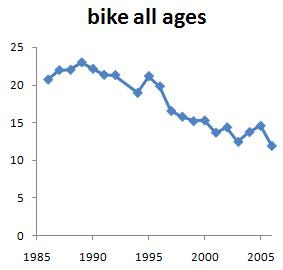 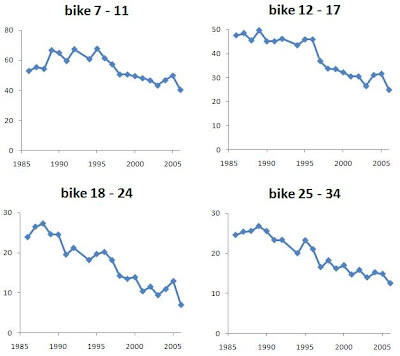 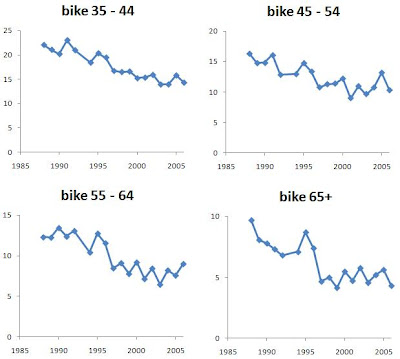 As you can see, most of the graphs tell the same story: popularity peaked sometime in the late '80s / early '90s, and since then has plummeted to about one-half of the peak value. Pretty odd since that's when crime started declining, so you don't have to worry so much about being attacked or having your bike stolen. And interestingly, the decline is consistent across all age groups -- so it's not just helicopter parents keeping their small children from riding their bikes around the neighborhood unsupervised. We just don't like being outside as much as we used to -- a pattern that showed up before in the data on the decline in going to parks.

Perhaps this partly explains why so many of the Stuff White People Like items have to do with the outdoors, bikes, and green stuff in general -- 20 to 30 years ago, it wasn't very rare for the average person to enjoy these things, although they wouldn't have tried to brag about their eco cred to others. Now most of us trap ourselves indoors all day long, so the hip people may be trying to proclaim their unique awesomeness by going outdoorsy. I realize that this could well be as idiotic as the idea that the elites only took up tanning once the commoners started working indoors. But at least the timing is right in this case -- as bikes were being abandoned by the population at large, suddenly the insecure status-climbers appropriated them as a symbol of coolness.