We saw previously that the mythology surrounding the decline in video game arcades is wrong. Home consoles did not doom them by poaching their sales. Rather, social spaces for young people gradually died off in the 1980s (more on that later), of which arcades were just one special case. As long as we're on the topic, it's worth debunking another piece of pop sociology about video games: the accounts of the video game crash of 1983.

Every cult takes real events and develops them into a creation mythology, often featuring a fall from grace that was punished by forces of justice. This serves as a reminder of how to behave in the present. Video game geeks are just another cult, and their creation mythology is just as phony as that of Biblical literalist Christianity, although still derived from real-life events.

The standard story, which you can read in that Wikipedia entry, is that video games became too popular in the late 1970s and early '80s, leading to a saturation of the market by a proliferation of consoles, many of which were no good, and a surfeit of poor-quality games. The market then collapsed under its own weight. Several years later, there were only a few consoles out -- really just one, the Nintendo -- and executives devised ways of ensuring that poor-quality games would be less likely to be made (e.g., Nintendo's "seal of approval"), and this lead to the re-birth of the industry.

This story is wrong. Go back and look at the graph in the previous video game post. There are actually 2 video game declines visible: one in the middle of 1983, and another beginning in 1992. Moreover, there is a third decline, albeit milder, starting in 2002 -- see the graph here. There are surges several years after the declines in each case. The common pattern is that video game sales plummet toward the end or just after a major recession, and spring back up when the economy re-enters the booming phase. This also explains why a glut of consoles precedes a crash -- before the recession, i.e. during booming times, firms are profligate and don't think much of risking money to introduce a video game console that may actually stink. I mean, hey, the economy is doing great, so what's the worst that could happen?

We'll have to wait and see how the current recession affects video game sales -- again, it looks like the drop starts a little after the recession is over, and we're still in the middle of it. Current sales data suggest the industry is doing OK but not as good as predicted.

The reason that video game sales fall off a cliff in economic down times is that durable goods are much more sensitive to recessions than non-durable goods. A clear example is the auto industry vs. the oil industry. In hard times, people put off buying expensive goods that last a long time, such as new cars, waiting for more favorable times to buy them. Compare the craze for SUVs, rims, Pimp My Ride, etc., during the latest boom, vs. the current moribund state of the auto industry. This is nothing new, of course -- the auto industry nearly died during the huge early '80s recession, for the same reason. In contrast, goods like gasoline you have to buy frequently, and you use them up quickly, plus they're cheap. So, you can't postpone purchasing them, even if you buy a little less than usual, in hard times. Video game consoles are long-lasting and expensive, so like most of the tech industry, they'll be much more affected by recessions than gas stations or grocery stores.

So, there is nothing special about the video game crash of 1983 -- almost every industry crashed around that time, due to the worst recession since the Great Depression. Of course, video game geeks and tech journalists don't possess even the most basic picture of history, so they can't draw on it to explain the history of their pet obsessions.

Even if they did, though, I doubt it would much affect the creation and fall-from-grace mythology that surrounds the 1983 crash. It is too important in cementing the social bonds of their cult, tapping into the psychology of sin (by industry executives) and meting out group retribution (by the outraged consumers). Just as literalist Christians don't want to hear naturalistic accounts of floods and speciation, video game geeks slam their hands over their ears and shout "I can't heeeeaaarrrr yooouuuu!!! lalalalalala!!!!" when someone offers a naturalistic account of their cult's historical narrative. The events that have shaped their worldview are beyond mere mundane explanations based on intro economics and a superficial survey of other relevant data. 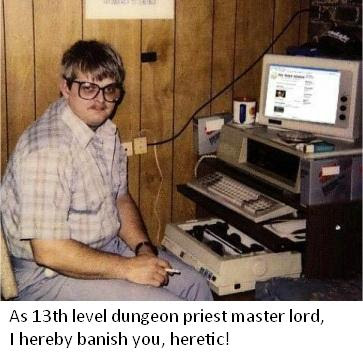