Home video game consoles did not kill the arcade

While we're on the topic of debunking pop sociology dogma, here's another thing I read about whenever the the history of video games comes up: arcades declined in the 1990s because the home consoles offered a similar experience and were cheaper.

Of course, this idea makes no sense -- why didn't the arcade game developers produce a new round of games that the home consoles could not so successfully copy? When a parasite species becomes adapted to sapping a host species, the host species adapts in turn to evade parasitism, and the cycle begins all over again.

Aside from that, it's just not true that playing Final Fight or Street Fighter on your Super Nintendo was the same experience -- the graphics and sound were not as good, and you weren't out and about, doing something somewhat social, surrounded by a boisterous crowd of your peers.

Video games have started to receive attention from academics, and most of it is the typical sterile lit-crit faggotry about analyzing the subtext of video games, how their characters reinforce the hegemonic cultural script, bla bla bla. However, there's a good social history that includes actual data and -- gasp! -- a graph. The author is Dmitri Williams, and the article is available for free. [1] I've redrawn the relevant graph, since it looks like a mess in the original: 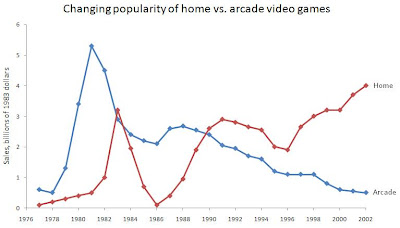 The "home consoles parasitizing the arcades" view may explain the data of the late 1970s through 1986, where the rise of home console sales predicts a slowing down and fall in arcade sales. However, from 1991 to 1996, home consoles went into a decline, and that should have allowed the arcades to thrive again. Instead, arcade sales began declining after 1988, regardless of how home consoles were selling.

I have more to say about why arcades were abandoned, as it seems part of a larger pattern of public spaces for young people evaporating during the 1980s and '90s -- roller rinks, mini golf courses, swimming pools, malls geared toward teenagers rather than 20-somethings and up with lots of disposable income, and so on. A Bowling Alone pattern among young people. The key point for now is that home consoles did not kill off the arcade.