We all know that you get fewer and droopier boners as you age, but just to remind everyone of exactly how this progresses, here is a graph from this article (hat tip: Jason Malloy): 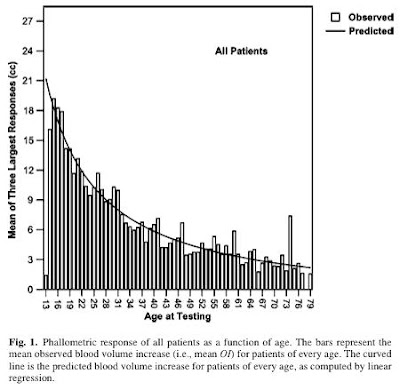 The vertical axis shows how much space the guy's junk filled up (in cubic centimeters) when looking at erotic stimuli, as a function of his age. The peak at around 17 - 18 shouldn't surprise anyone who remembers their junior and senior years of high school. Ignoring the curve and looking at the real data, the bars are pretty flat from about 22 to 32, and fall off for a second time during the 30s. By 28, I'd noticed a drop in my libido compared to my college years -- not in the mechanical aspect of getting it up, but instead how frequent and strong my urges were.

I don't know how I managed to keep my cool during a three-hour homework review session I led for a class I'm TA-ing. It took all I had to focus on the material and not about fucking all the girls walking around the library.

And just as soon as it appeared, it was gone, after about a week. But now it's back -- and I'm not talking about the natural high and low phases that guys cycle through all the time. I'm talking about a return to the days when you mastered the art of holding your binder just so in the hallway.

So what is causing this? Partly the low-carb diet, since in long-term experiments where men are only allowed to eat a moderate amount, but all carbs, they very soon lose all interest in sex, and return to normal when they're allowed to eat protein and fat again. Also the obese, who eat too many carbs, have higher rates of flacidness. But I've been eating this way for at least a month now -- so it seems only necessary, not sufficient.

Now that I've had time to think over what I began eating, then stopped eating, and have just recently returned to eating -- I think it's cheese, at least the hard types like Emmentaler and cave-aged Gruyere. I'm not lactose tolerant, but these aren't so bad, and I just discovered Finlandia's Imported Swiss, which claims to be lactose-free and appears to be. I don't even eat a whole lot of it (mostly to not press my luck with consuming tiny amounts of lactose), but a little must go a long way.

I've searched Google and PubMed for support for this anecdote and conjecture, but all I can find is that cheese tends to be high in zinc, and that's used to treat ED. I doubt that's it, though, as I was taking one-a-day vitamins for years and didn't notice any effect. I really have no idea what the mechanism could be, but this is the only food item that fits the pattern. Maybe it has to interact with something else. Just in case someone knows a lot about this stuff, here's what I had for breakfast today, with asterisks next to items I was eating several weeks ago too:

You may have to go through a several-day period of weaning yourself off of carbs before you notice a change (or not), but it's worth a shot. Whatever the cause, it's clear that lower sex drives are another consequence of a shift to high-carb diets, and why guys seemed more macho and rarin' to go back in the '70s and before. And this is just one more example of how high-carb diets appear to hasten the aging process.

Perhaps this also explains why the French recently topped the list of European countries by average penis length and girth. Compared to our plant-eating cousins in Britain, the French have relatively high-fat / high-protein diets, and they eat cheese by the barrelful. And lord knows their popular and high culture is much more libidinous than ours.