Lower crime is not associated with more materialistic values

In Irrational Exuberance, Robert Shiller reviews many possible reasons why people may have been so enthusiastic about the stock market in the 1990s. One of them is that with the fall in violent crime, it was no longer dangerous to flaunt your wealth, lest it attract hordes of criminals. Now that more basic survival needs had been taken care of, you could indulge your materialistic side -- say, by jumping on the stock market bandwagon.

To be fair, he doesn't dwell on this point; there's only a single, off-the-cuff paragraph about it. Still, level of materialism is not predicted by the change in the crime rate. The reason for this oversight is that no one knows -- consciously -- that there have actually been two decade-long crime waves in the 20th C: the familiar one that began with Elvis and peaked with Dr. Dre, and the nearly-down-the-memory-hole wave of the 1910s and the Roaring Twenties, peaking in 1933 -- y'know, those flashback parts from The Godfather Part II, the Saint Valentine's Day Massacre, etc. Here is a graph of the homicide rate for the entire century (data here): 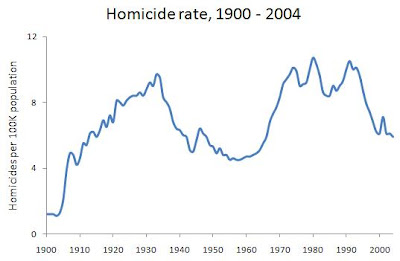 If the downward trend in crime during the 1990s aided the rising materialism, why didn't a similar decline in crime from 1934 - 1956 do the same? If anything, materialism was evaporating during that time. Conversely, the ostentatious 1920s saw a skyrocketing crime rate, not a decline. So, while the relation between lower crime and higher materialism may hold for the recent crime wave, it was just the opposite for the earlier crime wave.

Probably crime and materialism follow independent courses. If they have slightly different periods, superimposing one trend on the other will produce beats -- at one point, they'll be completely in sync (mid-1920s), and at another point they'll be completely out of sync (mid-1990s). This is a key reason that we need to look at as long of a stretch of data as possible -- otherwise, we'll see a strong moving-in-tandem pattern in what is really a coincidence.