When were the best songs written?

Rolling Stone came up with a list of the 500 Greatest Songs of All Time. We can ignore the ranking of songs for the most part, although appearing at all on the list is an OK way to measure how good a song is. I checked the year each song was released in to figure out how many songs on the list came out in a given year. Here is the result, where 3-year moving averages are used to smooth out the data: 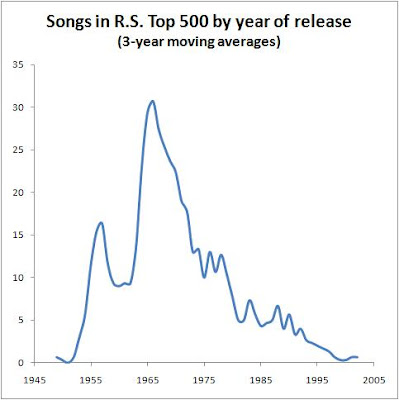 Obviously, this graph reflects the tastes of the people who wrote the list. Since it was drawn up in 2004, it doesn't reflect the surge of, er, what did they call it at the time -- post-punk revival? They've probably stopped calling it that anyway, like how the term "hipster" has gone out of fashion for referring to hipsters. At any rate, from about 2003 to 2006, a lot of cool "back to basics" stuff came out, but things have seemed dead for the past two years. Also, the list gives little weight to the late '70s and early '80s, when a bunch of great punk and disco music came out.

It's no surprise that a list composed by nerds shows such a disdain for music that you can dance to -- we're supposed to pretend that pop musicians are serious artists, and therefore that the audience should face and worship the band while standing still. Dance music stars weren't taken seriously, as is correct for pop musicians -- they were only to play music that would allow listeners to cut loose and mingle amongst themselves. And anything preferred by extraverts, especially the extreme ones like gay males, is universally tarred as uncool by snobs, who were largely friendless in high school.