Is it OK now to resume exotifying The Other?

Most of the girls I crushed on in college were Brown babes, and all Brown girls back then -- whether it came up in conversation, or whether I heard them say such things at the annual interracial dating forum -- were gripped by the fear of being exotified. "I don't want to be valued just because of my ethnicity," they shuddered, as though any white guy who came on to them wanted only an inanimate Princess Jasmine doll. At least in my case, I never wanted a Princess Jasmine -- more like a Saracen slave girl.

But no guy with a taste for the exotic ever found South Asian ethnicity sufficient (there are ugly ones), nor even necessary (since he'd be fine with his own group too). It's just nice to enjoy a sweet that has a different shell, even if they're all pink where it matters.

In a previous post on this topic, I found a perfect example of the risible extremes that upper-middle class white men had to go to, in order to convince the Brown girl they wanted to have sex with that they weren't Princess Jasmine-collectors. It's like those tiny male spiders who have to perform intricate five-hour mating dances in just the right way, lest the big angry female gobble him up.

Well, have things changed since then? I think so. I searched JSTOR, an archive for academic journals, for all instances of words beginning with exotif* (like "exotify," "exotifying," etc.) or exoticiz*, looking through the full text of articles and reviews. I then divided the number of articles in a year by an estimate of the total number of articles that JSTOR has for that year, based on a similar search for highly frequent words (which should capture just about all articles for that year). This gives an estimated fraction of all articles in a year that touched on the silly notion of exotification. Here's the graph: 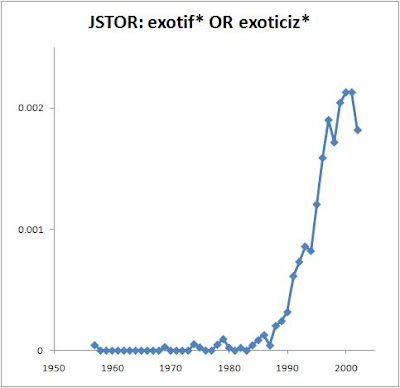 Although present since 1957, it's not until 1988 that the paranoia begins to skyrocket. Still, by 1997 its growth rate had tapered off, and in 2002 it entered a decline. I crudely extrapolated for 2003 and got the same value as for 2002, so this downswing wasn't a temporary fluke. Five or six years later, it is probably lower still, though by how much is hard to say.

Let's say it takes five years after the peak for the trend to be decaying enough that the average 18 y.o. college freshman won't take the idea very seriously. That means any ethnic girl born in 1988 or later is pretty safe to exotify. Hell, Persians have always been safe -- you can say to her face that you "like Persian girls," and her eyes and clitoris will light up from being intrigued. But I'll bet you could even say something similar, if not quite as bold, to Brown girls under the age of 21 and not freak them out like you would their 25+ counterparts.

I wish I had some anecdotes, but there are damn few South Asians out here in the Mountain Time Zone, except for a handful of very unattractive engineering and computer science students from India (not like the stunning foreigners "of good breeding" I saw in college). I only worked close with one South Asian student when I was a tutor, and she was born in 1990 or '91. She took a bit of a liking to me, but she had olive skin, green eyes, and auburn hair -- not the darker type who would be afraid of exotification anyway. If anyone is more in touch with young Brown America -- and not just the ethnic activist ones -- feel free to leave a comment.