Returning to the topic of rational and irrational hysteria about rape, what happens if we look at a milder charge like sexual harassment? Here's how much attention the NYT paid over time (I ignored news summaries and counted only the real article referred to): 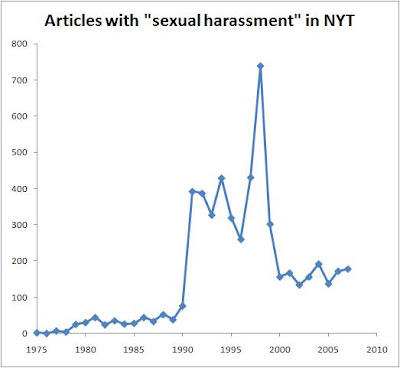 The phrase first shows up a bit after the start of women's lib, in 1975, makes a jump into the tens from 1979 to 1989, spikes in the early '90s and again in the late '90s, and plummets and remains stable by 2000 (though still at an order of magnitude higher than before 1990). As with "date rape," the panic is mostly phony, as sex crimes steadily declined after 1992. Also like date rape, sexual harassment is vague enough that believing is seeing, especially when it has the force of a spreading rumor behind it.

By the way, these moral panics are not caused by a high-profile event -- why was such an event so high-profile in the first place? It's a circular argument, requiring that we already be whipped up into a panic before the event in order to be so attentive to it. The dynamic of the hysteria plays out, and some events are given lots of attention if they touch on themes of the hysteria, since the audience will be hungry for information about it.

Really, were there no Anita Hills, Paula Joneses, and Monica Lewinskys before 1990? Given that we've become more civilized over the past 250 years, it must be that previous presidents made unwanted passes -- or worse -- to strange women, held mistresses, and so on, but that opinion-makers didn't think it was interesting enough to make a big stink about.

The more I look into these things, the more it seems like there's a coherent period beginning in the late '80s, peaking in the early-mid '90s, and abruptly ending just after 2000. Political correctness, postmodernism, the culture wars, Third Wave feminism, etc. -- they're all pieces of it, and everyone's noticed them before. The point in making these graphs is to flesh out their trajectories more finely, to do away with lazy periodizations like The Eighties *, and most importantly to see if they have in fact died -- fortunately, they have!

So here's yet another reason to make friends with, flirt with, and date girls who were born in 1987 or later ('85 to '86 is a gray area) -- the oldest ones in this cohort started puberty in 2000, when the sexual harassment hysteria had already wound down, so they weren't brainwashed during their formative years like those born between 1965 and 1978 (particularly those born around 1972). While all females view unwanted romantic advances as annoying, young girls today don't see healthy male sexuality as a threat to society, so you can be yourself around them.

* Usually the period isn't contained entirely within such a decade, and that lack of precision keeps us from seeing the big picture. Like, what if something cycles with a period of 13 or 26 years -- one-half or a full human generation? We wouldn't see that. Also, "the '80s" are not homogenous enough to deserve a name -- for example, if you go to a good '80s night at a dance club, about 90% of the songs will be from 1982 to 1984, before arena rock and whiny college radio music took over. The same goes for "the '90s" -- grunge died by 1994, and the late '90s were plagued by boy bands, girl bands, and techno.