The decline of print journalism?

I hear about this a lot, and I'm sure there are circulation and revenue data that show this (or maybe not, and it's just an urban legend among the chattering class). However, what about just how many articles a newspaper puts out each year? That's surely worth looking at: more articles would seem to suggest better, more productive times. I searched the NYT online for "the" -- the most frequent word in any corpus of English text, guaranteed to show up -- to see how many articles came out in each year. Here is the graph for 1981 to 2007: 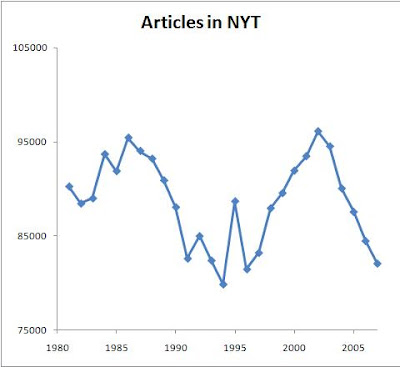 There is a downward linear trend, but it is minuscule, accounting for only 4% of the year-to-year variation (other ways of modeling the trend capture a similarly tiny amount of variation). There's a pretty clear cyclical pattern, though, with an apparent period of 16 years (8 years from the peak in 1986 to the trough in 1994, and another 8 years from 1994 to the next peak in 2002). The difference between maximum and minimum values is about 16% of the maximum value, so we're not talking about small changes up and down.

Obviously the internet has nothing to do with the rise and fall of articles that we see. Maybe it tracks some more abstract "economic prosperity" or "booming business" index, but I don't know enough about recent economic history to say. The number of articles declines in the latter half of the '80s and first half of the '90s, when the economy went into the shitter, and recovers during the booming part of the '90s, but it has been declining steadily since 2002 -- have things really been so bad in general starting in 2003? I'll let someone who knows a lot about the economy take that one.

At any rate, the key point here is that you have to look over longer time-scales to say that something is declining -- maybe it's just cyclical, and we're currently in one of the downward-sloping stages. If I get really bored sometime, I'll do a more sophisticated search so that I can get data from before 1981, but even with these data, it's clear that the story of a steady erosion of print journalism is misleading. If my hunch above is correct, the newspapers will hit bottom around 2010 but pick up afterward.