Since youth is the single most important factor for a female's physical attractiveness, it's no surprise that the over-30s try to cripple the invincible 15 to 24 year-olds, well intentioned as they claim their motives are. * Indeed, any free and unsolicited advice from them to youngsters about beauty matters should be assumed to be a Trojan Horse until proven otherwise. Lamentably, these more subtle methods are the only way to get the job done now -- not like back in the good ol' days when that jealous old crone lopped off Rapunzel's hair. Case-in-point: some propaganda on hair length from an About.com beauty expert.

Notice how the middle-aged writer's advice to 30-somethings through 50-somethings says that longer hair is sexier, and to at least aim for a medium length, short hair being the style that you're only forced into when you can no longer hope to look sexy. It seems rather clear-cut, then: longer hair is more attractive. (Ask any guy, and he'll agree.)

But when counseling the 20-somethings, in every one of the four paragraphs she tries to bully them into cutting off their hair:

- "This is the best time of your life to try out all types of haircuts and styles. Short hairstyles, done right, can make you look more mature (or like a kid)..."

Note the appeal to the desire to experiment -- and so much for the clear-cut conclusion, no experimentation needed, that longer hair is sexier.

- "Trying to make your way in a man's world? Chop off that long hair and try a shorter cut. Check out this photo gallery of super-short looks."

Notice how no career path calls for longer hair -- perhaps "professional" or "funky" hair. And why not give the same advice to 30+ women trying to make it in a man's world, unless they're already a CEO or senior partner at a law firm I suppose?

- "Experiment with length and color. Now is the time to see how you look with super long hair, then cut it off and see if you take to short hair. At your age, your hair will grow faster and thicker than at any time in your life. So enjoy it while you have it."

Hey, while you're at it, why not try being slim one season, and then pig the fuck out for a year and see if you take to being a lardass. At your age, your metabolism is faster than at any time in your life. So enjoy it while you have it, you bitch.

- "Beware the wrong short cut. What you don't want to look like is a stock 'Mom' character. Choose a short look that fits your age and the latest trends. For some ideas, check out these photo galleries of short cuts."

This entire tip just assumes that she's getting her hair cut short -- because you are chopping off your hair, aren't you? By the way, here is the gallery of short cuts. Most of them are tragic. Only the super-feminine can wear boyish hairstyles and not be confused with men -- jesus christ, look at Pink with short sleek hair. She looks like a man in prison. Here's a good example of a short cut on babyfaced Selena Gomez: 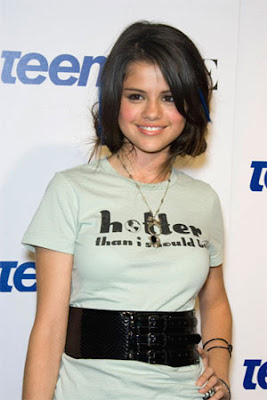 She still looks better with long hair, though, as does Audrey Hepburn and any other woman who could look good with short hair. Unfortunately, women are too gullible and conformist to beat back the unrelenting mob of hair-cutters, but like that aging advice columnist said, at least it'll grow back pretty fast. Let's just hope they don't screw it up a second time.

* It's the same reason that a girl sabotages her female friends' looks when they huddle together to plan what they're going to wear. The shrewd girl will persuade her friends to dress like borderline sluts -- not so bad that she couldn't be seen with them, but enough to make sure that she looks the most respectable. It's not to prevent guys from advancing on her friends -- it will probably invite that -- but to set the poor saps up for gossip, rumors, and dirty looks from their female peers, whose esteem they value more than that of their male peers: