Because you never know...

When people are still growing slowly into adulthood, it seems like their social circle is more diverse for personality traits, attractiveness, IQ, and other traits, compared to the social circles of over-25 people. For one thing, adolescence is such a tumultuous time that you band together with whoever will get your back in the social jungle. Once you've secured your spot in the world, you can be more choosey about your friends, and seek out only those who are highly similar to you. Has anyone else looked back at who they were friends with in high school and wondered how the hell it worked? You would never be friends with most of them now because you're too different.

Also, high school doesn't have as powerful of a segregating effect as do college, the career world, and grown-up leisure spots like nightclubs or country clubs. As one example of many, consider sorting into groups by similar level of smarts. Even at a fairly homogenous high school, where everyone has an IQ of at least 115, those at the bottom will surely go to college but separated from their brainy high school friends, who will go to elite colleges, as well as from their friends just above them who will get sorted into second-tier colleges. These separations are amplified after college graduation when the brainy ones work in a world apart from the "merely" above-average ones, despite perhaps working in the same building. 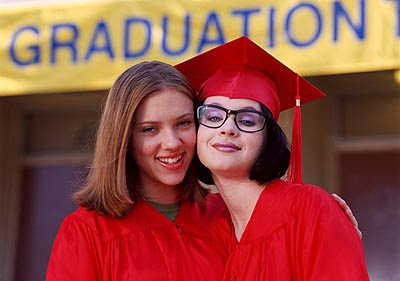 This is a roundabout way to introduce a reminder to those readers who enjoy younger girls: it often pays off to befriend one who isn't so attractive or so girly in demeanor. If she's 25 or older, most of her friends are probably also like her. But if she's 18, you can bet she has at least a handful of cute girly friends, since the social machinery hasn't completely sifted them into separate bins just yet.

Obviously you don't want to make these your primary targets, but on a down-night, or when prospects don't seem well during a day game situation, you might as well befriend them and organize a meet-up with her friends. If it goes nowhere, then casually drift apart -- nothing wasted, really. Or have her accompany you somewhere as age-proof.

Back in mid-May, I had a slow night at an 18+ club and decided to chat up a goth-looking teenager who I saw looking over at me frequently. I'd rank her face as a 6, but overall probably a 7 -- it's just very, very difficult to have an ugly body at that age. Not normally who I'd approach, but she appeared pleasant enough. With stunning 25 year-olds, you neg them hard right off the bat, but with a teenager who knows she's not one of the pretty girls in school, you have to treat them more kindly. I simply said over my shoulder, "Hey, y'know you look kind of like a Tim Burton character" -- guaranteed to work on any goth-ish girl, plus it establishes your cred with them.

So we yakked for awhile, and then she abruptly asked me how old I was. Since I was not thinking about winning her over, and because I was somewhat buzzed from alcohol, I responded honestly that I was 27. It didn't make her uneasy, and we resumed chatting. About five minutes later, she asked for my cell phone and put her number in -- knowing that I was 9 years older than she was. (And yes, she has a delightfully youthful name that began rising in popularity around 1990.) Don't read her as an insecure girl looking for validation -- she's highly assertive and dominant, and of course she has a masculine digit ratio.

I said she should join me sometime for '80s night, but she couldn't because the next day "I have school" -- three of the greatest words to hear, especially when they call it "school" rather than "class," although that surely beats "work."

At any rate, we've hung out several times at the club, although she moved away for most of the summer. We met for the first time in awhile on Saturday, and she brought a friend of hers this time. What a treat: also probably 18, about 5'3 and petite, lightly tan skin, auburn hair, brown eyes, girly face, indie rock teenybopper clothes, and an uncontrollable urge to stand closer to me. (She, however, has a name that peaked around 1970, and not even a mellifluous one at that -- every cute girl has her one big flaw.) Unfortunately she got sick and had to leave pretty early, but not before blurting out a completely non sequitur reference to her ex-boyfriend and how glad she is that it's over.

Being introduced to a nice young girl on the rebound by her friend, instantly overcoming any doubts she may have about whether I could work in her social circle -- priceless. Plus our mutual friend is still pretty fun to hang out with, and works as a crucial age-proof when I'd like to talk to other young girls in the club. Sometimes it's worth befriending girls who you normally wouldn't -- at her age, it's expected that the group of friends will be a fairly motley bunch anyway.