One of the stranger developments in recent popular culture is the stratospheric rise of reality TV, game shows, and musical variety shows. What ever happened to sit-coms? Those were fun -- they didn't require a life-long commitment to follow their narrative threads, and they were down-to-earth rather than bombastic. Whenever I watch TV while visiting home, it seems to get worse and worse each year.

While everyone is aware of the absence of these kinds of shows in the good old days, and their dominance today, it may come as a surprise to learn that in yet another domain the fixtures of Millennial-era culture are reviving the mid-century, consciously or not.

A quick graph will make the point. I looked at TV shows by ratings, and kept the top 20 that were original programming -- excluding sports broadcasts and Hollywood movies shown on TV. (There are only a handful at most in any year, but I'm going to stick with original programming.) I then checked their entries at IMDb.com to see what genres each show has been tagged with -- comedy, drama, crime, etc. -- and found how many hit shows in each year belonged to either the reality, game show, or musical genres. Here is the pattern over time, from the 1950-'51 season to the 2011-'12 season: 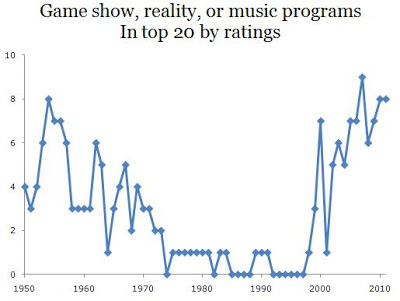 We see the well known recent rise, and their near absence in the most of the '70s, '80s, and even into the mid-'90s. But that lack of spectacle TV did not extend indefinitely back into the early days. In fact, it was just as dominant in the '50s as it has been in the 21st century -- nearly half of the top 20 shows -- before gradually declining during the '60s and early '70s. The mid-century craze for game shows and musical variety also showed up in top-rated radio programs.

There wasn't as much reality TV back in the '50s, although they did have This Is Your Life. I'd attribute that more to technological limitations -- the medium had just begun, and they hadn't figured out how to easily document people's lives as they were happening. There was also a reality show or two during the heyday of radio programs, but I don't immediately recall their names.

While the ratings are the best guide to what really resonated with audiences, you see the same rough mix of genres in the full line-up of shows. Here is an archive of prime-time schedules going back to 1950, and here is an archive of ratings. Lots of game shows and musical variety hours in the '50s, lots of sit-coms in the '80s, and lots of reality / game show / musical shows in the 21st century.

Why are these spectacle types of shows more popular in falling-crime times? It seems like they're substituting virtual excitement for real-life excitement. People don't go out of their houses to do exciting things anymore -- even occasionally, like feeling blown away by a Fourth of July spectacle. Yet they still want something stimulating to take part in, especially as part of a larger audience.

That would also explain why TV is not so bombastic in rising-crime times -- people have enough excitement going on in real life, between playing sports, cruising around in cars, dance fever, live music, and carnivalesque "shopping" trips. (The excitement came from being part of the bustling crowd, as most people didn't actually buy anything during a trip to the mall.)

I also think people are looking for answers more during rising-crime times. When crime seems to only keep going up, what's going wrong in the world, and how can we try to make things better? Even if it's at the basic level of how we treat the other people in our daily lives, not a utopian social engineering project. That's what the sit-coms of the '80s were all about -- not preaching a message, but reminding us of basic truths about how we ought to treat each other if we want to remain socially cohesive in topsy-turvy times.

Reality TV, game shows, and musical variety hours prevent any learning or awareness from taking place in the larger course of entertainment. They're pure diversion. And with sit-coms, it's not "learning that..." but "learning how..." It's practical rather than nerdy learning. When the threat of crime, security, and danger seem to be taking care of themselves without our even thinking about them, then why bother seeking answers? Just tune in to the spectacle instead.