If you have kids of your own, or nieces or nephews, or maybe know someone else's kids fairly well, you may have noticed how long they continue to wear diapers these days -- well beyond age 2 or 3, when they should be toilet-trained.

When I saw my nephew during Christmas vacation, he was 4 years and 9 months, yet he was still wearing a Pull-Up to bed at night. That's a diaper that you pull on like underwear, to not embarrass the kid as much as if it had the baby-like diaper fastenings. But still, nearly 5 years old and wearing a Pull-Up = shame. Those are meant to be worn whenever, but there's another diaper line specifically for nighttime wear, to deal with bed-wetting in children (not babies), called GoodNites.

Also, he was only about 90% toilet-trained. My mom said she had me trained between 1 and 2 years, in the early '80s. This change isn't only in my family; if you look around on parenting forums, blogs, and articles, it's easy to find debates about letting your kid wear diapers for a lot longer than 2 or 3, as well as for delaying or extending toilet training until whenever you or the kid feels like completing it. The central reason as always is to shield their fragile self-esteem from all distressing environmental feedback, like waking up in a wet bed.

Distressing feedback is what causes growth and improvement, to deal with the currently inadequate state of the system. Blocking out the real world prevents them from receiving pleasant feedback too: if they wake up in a dry bed, it might not have been because their own system is working well, but only because they wore a diaper to bed. So, shielding your kids from feedback stunts their growth and leaves them unsure if they're developing properly.

When did diapers for children become popular? With the Millennials, naturally, the first generation to fall victim to helicopter parenting. Huggies Pull-Ups were introduced in 1989, and GoodNites for middle-years children in 1994.

Actually, they were only the most recent generation. Helicopter parenting was the norm during the mid-century as well. Was there an earlier wave of support for children's diapers? You bet. I've been looking over issues of Parents magazine from its beginning in the late 1920s through the present. Mostly looking at the covers and skimming the ads. I don't know when this ad first appeared, but it was no later than 1955 (and it was in multiple issues from that year): 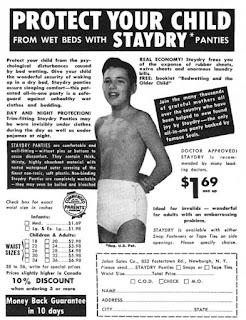 "Protect your child from the psychological disturbances caused by bed wetting" -- sound familiar? I mean, who cares if he's 8 years old and still wearing a diaper to bed? We can tell this is for children and not babies because the picture shows a middle-years child, there's an offer for a free booklet called "Bedwetting and the older child," and they're offered in waist sizes from 18 to 36 inches, i.e. not for infants or toddlers.

Not wanting to bruise your child's precious self-esteem is also associated with Dr. Spock's mega-selling child advice book, Baby and Child Care, which first came out in 1946 but remained influential throughout the mid-century. It also advocated letting the toilet-training take however long it took, rather than try to impose a time-table. Translation: let your kid stay stunted for as long as possible, and let him guide the process instead of you.

I suspect there were successful products like this before the '50s, but I've only been skimming the ads and paying attention to those with pictures, and I've only looked at years ending in 0 or 5.

I did look through all issues I could find from 1926 through 1930, to get a better feel for Jazz Age child-rearing. There was nothing like this being advertised. Back then, the Behaviorists were more influential, and in practice it wasn't as bad as you'd think. Parents weren't putting their kids into Skinner boxes -- this was Watson's heyday, not Skinner's. And they seemed to let their kids roam free like parents did in the '60s, '70s, and '80s.

Their emphasis on strict schedules and refraining from close early contact were obviously not adhered to -- mothers just can't feel that way about their kids. Rather, it was to try to push parents toward the middle, and away from the opposite extreme of smothering them, which was the norm in the Victorian era. Wanting to bind your sons to the home with "silver cords" of love, grown sons talking about stroking their mother's silver hair and stealing a kiss -- creepy. The turn-of-the-century through the '20s and early '30s was only trying to move away from that weirdo mother-son relationship.

At any rate, what kinds of products did they advertise to deal with childhood maturation? Not products that let the kids stay stunted, but that would help them to grow up if they weren't already. There were several different brands of anti-thumb-sucking devices being advertised in the Jazz Age, something like this:

This entry in a database for graphic design says that it appeared in Good Housekeeping in 1932, which is some years after it appeared in Parents. Clearly there was a decent demand for products that would help your kids leave behind babyish ways, not draw them out as long as they wanted.

Letting kids wear diapers is part of a broader pattern of slower development during falling-crime times, since the future does not have to be discounted so much -- and why do today what can be done tomorrow? Rising-crime times shift people's time horizons closer to the present, putting their feet to the fire almost, so parents feel more like nudging their kids along faster through the lifespan.