I'm sure you've heard the story by now -- famous black academic breaks into his own house, police question him about it, and he freaks out about their supposedly racist mindset. And like the suburban wigger who finally gets pulled over by the cops, he's so ecstatic about an actual encounter with the police that he plans to make a movie about it (from here):

The charge against him was dropped Tuesday, but Gates said he plans to use the attention and turn his intellectual heft and stature to the issue of racial profiling. He now wants to create a documentary on the criminal justice system, informed by the experience of being arrested not as a famous academic but as an unrecognized black man.

Back here I showed that Google searches for various phrases associated with identity politics show downward trends over the past several years, which I take to show less and less interest in such topics. In particular, the alleged racism surrounding Hurricane Katrina, the Jena Six, and the Duke lacrosse hoax didn't catch anyone's attention. They made the news for a little bit (the lacrosse case for a little longer, just because the trial lasted longer than a hurricane), but once the event itself was done, everyone went back to business as usual. Importantly, there were no massive riots as there were during the social hysteria of the early 1990s when the "not guilty" verdict in the Rodney King case sparked the disastrous L.A. riots of 1991, or the other L.A. riots of the late 1960s. Therefore, no one will care about Gates' run-in with the police in 2009.

In fact, here's a graph showing the frequency of the term "racial profiling" in the NYT from its first appearance in 1994 up through 2008: 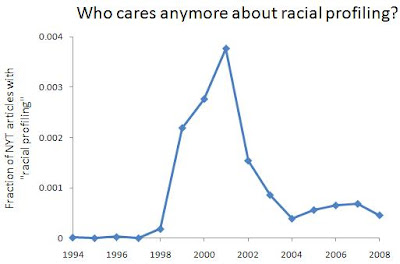 In the late '90s and early 2000s, there was a hysteria about this term, but it was short-lived, and it wasn't large enough to trigger riots. If Gates plans to make a documentary about "racial profiling," he will be dealing with a nauseatingly unfashionable topic -- although you figure he'd market it to Gen X and Boomer dipshits anyway, among whom it's still a favorite buzzword. But don't expect it to catch on -- blacks have shown very little enthusiasm for taking it to the streets lately. There will probably be another massive social hysteria in the middle of the next decade, so if he wants a big audience, he should wait until then to release it.