I checked this DVD out with a few others for Halloween, but was surprised by how little it resembles a standard horror or monster movie.

Made during the gritty 1970s, there is nothing supernatural, fantastic, paranormal, or surrealistic in its atmosphere, in contrast to the original from the peak of otherworldly terror during the early '30s. Unlike vampires and back-from-the-dead mummies, though, a giant ape deserves a more naturalistic portrayal, so it benefited from being remade during the '70s.

Even when the adventurers sail up to the mist-enshrouded Skull Island, the veil of fog has no high-key lighting, no dynamic movement of cloud shapes (as though they were hauntingly animated and trying to ward off the intruders), no boat-rocking waves (as though alive and angry), no unusual colors, or other visual effects. The forces instilling dread are wholly mundane, but no less disturbing for that -- the uncertainty of the natural world, especially where it's unexplored, opens up so many potential paths leading to disaster, rendering demonic intervention unnecessary.

Nor are the natives of the island portrayed as employing supernatural weapons against a supernatural menace, as in The Exorcist, one of the few exceptions to the naturalistic trends of the '70s. Although working themselves up into a frenzied tribal dance, lit by torches at night, their ritual is depicted (and explained by the academic in the party) in completely functional terms. Namely, they are offering up one of their women, so that Kong will be distracted enough to leave their settlement alone for awhile.

No magic involved, no primitive superstition, no purely symbolic performance (the woman is to be literally given over to a real-life giant ape). The priest puts on a special mock-ape costume, the sacrificial woman is dressed up in special bridal garb, and there's a carnivalesque level of music and dance, but none of it is out of this world. It could be from a National Geographic documentary.

The heavily stylized cinematography, however, is anything but naturalistic, utilitarian, and documentarian. It uses all of the elements of the sublime style, as I explored in a post about The Parallax View, shot just a couple years earlier. And all filmed in Panavision, whose signature shallow focus shots lend a theatricality to the naturalistic action. Especially when such an impression is called for, e.g., during the ritual sacrifice. She appears as a central actress atop a focal set-piece on a stage, with the environment appearing more as a flat blurry mural along the back of the stage, not an in-depth 3-D space that would be conveyed by a documentary. 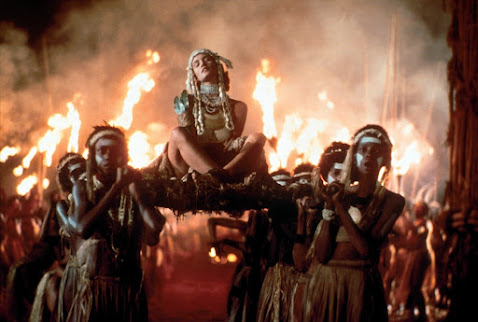 Naturally, King Kong leans most on the technique of showing tiny figures loomed over by imposing landscapes and structures, suggesting their relative powerlessness before forces far beyond their control, and which in their stillness come across as impersonal and unmoved by the characters' predicament, rather than animated against them in a pathetic fallacy, which would at least give them the familiarity of being part of a social relationship (even if antagonistic). These structures are the natural environment (and the primitive man-made gate) in the first two acts, then architectural ones as the plot moves to New York for the final act.

The score is equally crucial to adding style to the naturalistic plot and characterization. It strikes the right balance between being too bombastic for the tone (as though a Hans Zimmer score were grafted onto it), and being too atmospheric to build any tension. Again the best moments come as the adventurers first approach Skull Island. As their boat has pushed through the fog and is approaching dry land, an almost triumphal military passage begins, but it never really soars, and is instead dragged down by a foreboding undercurrent. It perfectly sets the mood: they think they've begun a conquest, but are actually about to meet their doom.

Then during the natives' sacrificial festival, there is enough frenzy to their music to signal that this is an unusual occasion, not their typical Saturday night out dancing. And yet it's not overwrought or space-y enough to make it feel supernatural, as though to put you in the altered state of mind of a drug-induced shamanistic spirit-summoning. It's very exotic and unusual, even for this tribe, but it's not from another dimension.

Rounding out the straight-but-stylized Seventies-ness is the screenplay by Lorenzo Semple Jr., who also wrote The Parallax View and Three Days of the Condor just before this one. Although not a conspiratorial thriller, there is still enough of the cynical tone and focus on corruption and deception among the elite power-players to give its social environment the same sense of alienation and inevitability (institutional rather than supernatural). At the same time, the main characters have enough of a heroic or romantic streak to make it feel like their actions might actually achieve their goals, in a triumph of their free will, rather than being doomed pawns moved about on an existential chessboard.

The stand-out performance is by the stunning Jessica Lange, in her debut role, as a Manic Pixie Dream Girl. She's a bubbly free spirit always searching for new adventures, and new people to brighten the mood of along the way. At first, she plays this role for the entire crew that has rescued her, flirtatiously but wholesomely lifting the spirits of an all-male crew, who would have otherwise felt like the crew in Jaws or The Thing.

Then she is drawn monogamously to lifting the spirits of the protagonist (played by Jeff Bridges), who had been on a course toward self-imposed perpetual bachelorhood, despite the enjoyment he gets from being a rugged academic-adventurer (a proto-Indiana Jones).

Finally, although she is initially terrified upon being kidnapped by Kong, she grows to bond with him as well, as her typically feminine rambling manner and clumsy ways intrigue the beast and endear her to him. She puts her own life at risk twice to help him out of trouble, and serve as his earthly guardian angel. First, when he is raging out against his cold metallic prison aboard the oil tanker that has captured him, and the captain is threatening to flood his cell rather than risk further damage to his ship, she climbs out onto the grate in the ceiling to speak to him and soothe him, then accidentally falls down in with him, where she calms him down further before climbing back out. Later during the finale, she insists that he not put her down out of his hand, but hold onto her as a hostage so that the military helicopters won't fire on him.

This emphasis on developing social relationships saves the movie from being another standard monster flick, as a remake of King Kong could have easily become. It's almost as though Kong himself were just another human character in a naturalistic adventure movie.

In fact, unlike the original, there are hardly any other monsters or unusual creatures in this one. There is a brief scene where a gigantic python threatens his girl, and he intervenes at huge risk to himself. This scene serves not to play up the fantastical cast of creatures on the mysterious island, but to develop Kong's relationship with her -- he is something of her abductor, but now also a protector and rescuer. Interpersonal relationships can be complicated that way, unlike monster-takes-girl. This relationship is present in the original, but is more richly developed in the remake.

So where did Kong come from, if there are no others of his species in the island? And hardly any other mega-beasts? Although the story does not go there, it seems more like he used to be a human being who, through whatever means, got changed into a giant ape, and who perhaps adapted a more ape-like personality and behavior over time -- but who could still be changed back to human if the right earthly guardian angel were to enter his world and reverse the curse. That would make it fit even more squarely within the "beauty and the beast" tradition.

Although this movie may not be exceptional by '70s standards, that's a pretty high bar to clear. It was a huge box-office success upon release, and critical reaction at the time was largely positive, if unsure of how to feel about the naturalistic rather than fantastical story.

I saw it as a kid sometime in the late '80s, in a giant Jazz Age picture palace, no less. I do remember it leaving quite an impression, but it was a bit over my head, and the only scene I distinctly remember is King Kong vs. the giant python -- the most monster-movie-like scene, with mano-a-mano combat between a clear good guy and bad guy. And of course I remember the thrill of the theme park ride that this movie inspired, Kongfrontation at Universal Studios Florida (sadly for Zoomers and Gen Alpha, you had to have gone there during the '90s or early 2000s).

It is simply a more mature and socially developed take on the monster / horror genre, just like fellow '70s entries Jaws and Close Encounters of the Third Kind, most of whose plots are going to go right over the kids' heads, except for the action-packed scenes.

Somehow during the internet nerd age, King Kong '76 has become panned or qualified-to-death, while the original remains highly respected. Probably because the current commentators are horror movie geeks who are going to be put off by the relative lack of fighting scenes, the eschewal of the supernatural, therefore the minor use of special effects (even though the animatronics are mind-blowing), and the pervasive emphasis on social relationships among the characters. BORRRINNNNGGG, dude just fast-forward to the only badass scene in the whole movie, where King Kong snaps that giant python's jaws apart, and be done with it!

Really the only bad thing about it is the theatrical release poster, and DVD cover, which makes it look like a low-budget camp-fest. But it's nothing like that.

This one is due for a major reappraisal, which I hope to have started here. If you like any aspect of what made '70s Hollywood so great, you're going to resonate with the remake more than the original. Pauline Kael liked it -- it was far from a mindless popcorn-muncher. At this point, despite being a blockbuster in its day, it's more of a deep cut. So go ahead and enrich your cinematic palette with, yes that's right, the Seventies remake of King Kong.