The Parallax View and the Sublime visual style

Finally tracked down a copy of this '70s paranoia thriller from the local used record store. It was available on Netflix Streaming a couple years ago, and was the very reason I signed up for it, as the DVD was/is out of print. And goddamn if the very next day its expiration date had passed!

Movie-watching was so much more satisfying when we had the neighborhood video rental store that stocked a library/archive of classics as well as cult classics. On Netflix Streaming, the classics are absent ("too expensive to license"), and the cult classics fade in for a couple months and then expire for good. And forget about renting anything from Redbox that's older than a few years. But moving on...

Striking art relies on strong contrasts or juxtapositions, firing the opposite ends of some spectrum in our brain at the same time. Hot and cool colors, for example. Done right, the combination produces a heady effect in the viewer. When the creators are no longer capable of, or the audience becomes uninterested in such striking visuals, the balance is thrown in either of two directions -- toward washed-out, slurry homogeneity (The Matrix) or toward collage-like information overload (Requiem for a Dream).

So, even if you find yourself unable to resonate with the plotlines, dialogue, or characterization of older movies (and they did those things better too), you should at least be able to enjoy their visual awesomeness. And The Parallax View is no exception, thanks largely to the cinematography of the legendary Gordon Willis (The Godfather series, All the President's Men, Manhattan). Movies have to be seen to be believed, but for this one still images give a very good idea since the camera doesn't move around very much and there is generally not a lot of fast-paced action.

What follows is a review of the major contrasts employed throughout the movie. Perhaps later in the week I'll follow up with a short discussion of what larger artistic traditions it is a part of, and why certain styles achieve greater success in some periods rather than others.

First, and most memorably, the contrast in size between tiny human-scale figures vs. gigantic architecture. Whether it's a scuffle on top of the Seattle Space Needle or strolling below your corporate skyscraper, taking a quiet ride up the escalator or standing trapped below a dam whose gates have just opened up, the helplessness of the characters is made palpable. (Click any image to enlarge.)

Next is the contrast between dark and bright lighting. Natural lighting conditions tend to produce more uniform levels -- brighter when the sun's out, darker when it's gone. Seeing both vivid brightness and saturated darkness at the same time provides a powerful yet unconscious appreciation for how unusual, even unsettling, the circumstances are. And because the brightness comes from human ingenuity (fires, lamps, lightbulbs), it also subtly massages the parts of our brain that respond to the natural vs. the artificial at the same time.

Bright vs. dark for lighting leads into sharp vs. blurry for focus. As I discussed here, this is so much more striking when the movie is shot with an anamorphic lens. The shallow focus makes the object we're supposed to be looking at very crisp, and everything else in front of or behind it more blurry. That stylizes the mise-en-scene so that we don't have to explore every little detail and ask "Is this important?" as we would in real life. Giving too much freedom to the audience takes us out of the experience, which should be more like going on a ride and getting lost in the moment.

This is one of the most effective techniques for building tension that will be resolved once the figures move to occupy space at the same distance from the camera, allowing us at last to see clearly how they'll interact. Details that are crisp at too many distances = giving away all information up front, no suspense.

Finally, and related to the focus contrast, is the contrast between open vs. occluded space. Both prevent a deep 3-D depth perspective from forming. Instead of -- or in addition to -- making certain things more salient by making them sharp and the rest blurry, the artist can also place those things so that they're transparent to our line of sight, and just shove huge opaque objects in the way to block out the rest. But in order for it to not look so ham-fisted, they can't look like stage props that were dumped right into the foreground; they have to be jutting in from the edges of the frame.

This technique produces a similar tension in the audience that shallow focus does. When the background is blurry, we want to squint a little bit and make out some important details better -- not all, but at least something like facial expressions. We feel slightly frustrated and anxious. When those details are instead occluded by large planes, we want to crane our neck or walk over to take a different viewpoint, one that'll allow more to come into view. It's like, "if only that damn camera would move, we'd get a better angle!" Though again, giving the audience too much freedom would rob them of the thrill of feeling suspense.

Along with the tiny vs. gigantic size contrast, the open vs. occluded space contrast gives the film its signature look. It appears constantly throughout the movie, so any single image may not do justice to the feeling you pick up over the course of watching it. It's used to greatest effect in exterior scenes, where occlusions that take up two-thirds of the frame create a sense of claustrophobia in what should be the wide-open outdoors. So fucking awesome-looking.

Below I've included a three-frame sequence of a plane heading for the runway, that's just had a bomb planted inside it. We want to know what's going on in there, yet that damn building is standing right in our way! This occluded shot goes on for what seems like forever, and by the end the suspense is killing us. 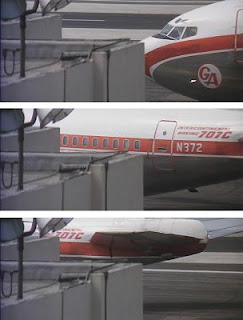 Sometimes the effect is not so strong, as when it's the walls of a building that blocks our sight, with only a small window for transparency (see below). I think this fails to produce tension in the viewer because we know that no matter where we placed the camera, and no matter what angle we looked at, we could never get around the mighty enclosing walls of that building. So we don't sweat it and accept the limited view with little anxiety. Only if we could switch to a more open view, yet are frustrated in that by the placement and angle of the camera, do we start to feel nervous.

The only major contrast that they didn't exploit is hot vs. cool colors, for example contrasting reds and oranges with blues and greens. Come to think of it, most of the otherwise sublime-looking movies of the '70s don't go there either, such as Chinatown or Three Days of the Condor. Color contrast had to wait for the decade of neon blue and neon pink. Throughout the '80s, the earlier contrasts were still being used, but now also the full wild rainbow of color. Blade Runner, Manhunter, and Black Rain hypnotized audiences with color contrast not seen since Art Deco architecture, Empire/Regency design, or the painting of El Greco and Rubens.

In fairness, The Parallax View is meant to be more naturalistic than supernaturalistic in its atmosphere of menace and paranoia, and a kaleidoscope of colors would have detracted from that. Still, although that choice is the best suited to the larger goals of the film, it does leave the viewer wanting something on a purely visual level. Again, it doesn't matter what you think about the plotlines, dialogue, and characterization of the '80s movies mentioned above -- their other-worldly narratives open up an even greater range of sublime images.