The Al Smith Dinner, held at the Waldorf Astoria, is typically an occasion for the two presidential candidates to put a little levity into the race, make some self-deprecating remarks, make a few light jabs at the opponent, and generally chum it up with fellow members of the elite.

This time, the time for yukking it up with the Establishment is over. Watch as Trump the court jester begins with his routine of juggling several glistening knives in the air, for the amusement of the white-tie audience, then calmly collects them one by one into his hands, and throws them straight into the chests of the plutocrats and the media.

The courtiers mocked him as a reality TV clown, and struck cruel blows against his little-people supporters whenever they felt like a little entertainment. So the jester decides to put on a show for the court where "Trump acts like Trump" and they're all laughing along with the act. He convinces them it would be a riot for them to put on wax masks showing elitist caricatures, then begins a fire-breathing routine -- only to spit the fire right onto their masks. As the courtiers scramble around the ballroom with their faces ablaze, the jester and his little-people companions storm out and burn down the rest of the palace.

Truly an adaptation of Hop-Frog worthy of 21st-century Weimerica.

YFW you show up to cheer in the stands of a public hanging, and the trap-door falls out under your seat instead. 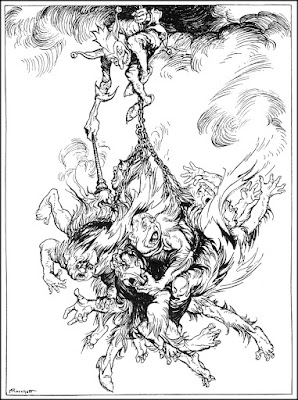 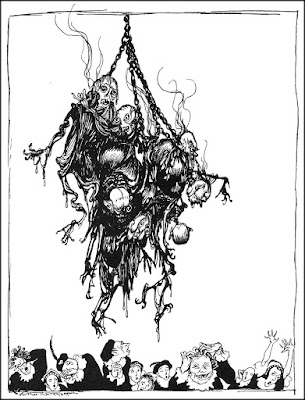