Now that the general election phase has begun, people are starting to wonder whether Trump can win enough blue states to put him over the top. See the appendix for a collection of electoral maps from the beginning to present.

Things look so good right now that I'm thinking 400 electoral votes is do-able, with 500 being a reach goal, and guaranteed victory no matter what. Of course others still have their heads stuck in the sand, pretending that we're still in the same old liberal vs. conservative battle which determined the current distribution of blue vs. red states. Those criteria are out -- now it's populism vs. Establishment elitism, and nationalism vs. globalism.

But what makes a state blue or red is going to change, since it's a wholly different set of criteria -- one which we haven't seen in our lifetimes. Perhaps the New Deal era was the last time that one party was known as the populist party, however that one (the Democrats) was also the one known for foreign interventionism, while the more elite-friendly party (Republicans) was more isolationist.

The point is, we don't have to pretend that people are still in liberal vs. conservative mode. If they were, then Trump would not have had his strongest early showing in both Massachusetts and Alabama, while suffering his biggest loss in Utah.

Everyone, even the know-nothing commentators, have repeatedly expressed their shock about how we seem to be in an upside-down world this time around. Not just about one aspect here or there -- but about so much, day-in and day-out, for nearly an entire year.

And yet when they put on their thinking caps (or ideological blinders, in the technical jargon), they assume that the world is qualitatively identical to the past several elections, and it's only a matter of whether Trump can trim away the tiniest slice necessary of the opposition in the familiar swing states.

It never dawns on them that if everything else has been upside-down so far, then which states in the fall will be genuinely neck-and-neck may be unexpected as well.

Looking at the particular candidates rather than Republican and Democrat, it's the same visceral awareness but conscious cluelessness. Everyone still has trouble believing that someone who has never been elected to any public office, and who's only been a practicing politician for less than a year has already knocked out not just one but 16 professional lifelong politicians, who served at the highest level (Governors and Senators). And -- did that in a landslide. And -- did that far earlier than planned (if anyone expected it to happen at all).

That is a never-before-seen phenomenon, which immediately tells us that we're probably in for even more surprises.

His main opponent is a former First Lady, one-term Senator, and failed Secretary of State (everyone will remember Benghazi, Syria, etc. -- no successes). She failed to secure her party's nomination the last time. And she's a woman leading one of the two major parties -- another never-before-seen scenario. She was born crooked, nobody likes her, and there's a major rift against her among the voters in her own party (the elite is consolidated -- the opposite of the Republicans, whose voters will be united but whose leadership may see a chunk of dead weight get cast off).

But somehow people are going to treat Crooked Hillary Clinton like she's JFK reincarnated in a woman's body. Secretary, you're no Jack Kennedy.

How many more historically unprecedented scenarios do we have to see which heavily favor Trump (not "Republicans"), before the commentators consciously admit that it looks daunting for Hillary to survive the coming tidal wave?

I won't link to any specific commentator taking that approach, since they're everywhere.

I do want to briefly discuss a different point being made by Andrew Gelman and a colleague, since he isn't a moron. In this post, he argues that the electoral map has become increasingly difficult to shake up because each state tends to shift less and less "over time". For the percent of a state voting Democrat (or Republican), he shows that the variation between the previous and the present election has fallen since 1956. He says that makes a "scramble" of the map less likely than it used to be.

But what we're seeing is not a return to higher and higher levels of variation, as though the electoral map were going to become more and more chaotic from one election to the next.

Rather, we could be seeing a transition from one steady state to another steady state. Maybe it'll take a few elections to get there, and maybe the transition will be a little bumpy (state A looked like it would join a certain bloc, but then it winds up in some other bloc). Still, after this brief transition, the map would look different, and it would return to a long period of lower and lower variation, as the wrinkles are ironed out.

These transitions don't happen very often, but then what have we been seeing all along? For decades and decades, the Northern states were solid Republican, and the Southern ones solid Democrats. Then during the New Deal era, most of the states touching the Great Lakes were peeled off into the Democrat column, staying there more or less ever since. And given how much of the population lives in the Midwest and Mid-Atlantic regions, that was not an insignificant change.

A smaller change has occurred since 1980, whereby the Southern states have gone reliably Republican and look to stay that way during the Trump vs. Hillary election. For 150 years before that, those states were solid Democrat states.

Changes this drastic are rare, but that's what we mean by "historic" changes. And again, by all accounts we are in one of those historic changes. You'd have to be living under a rock not to notice. (See also: TV debate audience size, candidate rally audience size, primary turnout, media buzz, etc.) So who's to say it won't continue for another six months, and we'll begin a transition to a different-looking map?

Finally, there's one less-historic way where Trump wins big-league, including all sorts of states everyone assumed would stay blue, but that this doesn't lead the way toward a different steady state of who's red and who's blue. Maybe it will be a one-time referendum (2016 plus his re-election in 2020) on putting aside this culture war crap, and fixing the economy and government.

Predicting what's going to happen in 2024 is of no use right now. But it goes to show that even without re-drawing the electoral map for the next several decades, the Trump phenomenon can still win a large number of blue states just this once (and again for re-election).

Regardless of what happens after Trump, it seems increasingly clear that we will at least get to President Trump, and given how weak the competition is, probably in an electoral wipe-out. 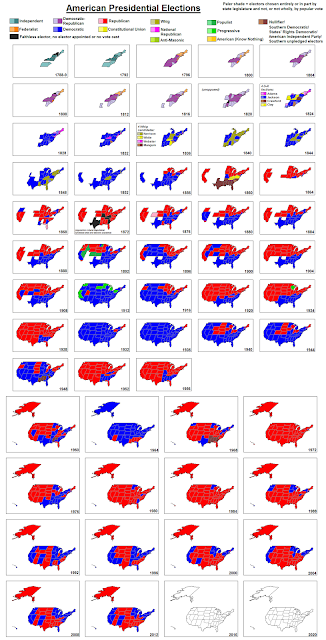