The Millennial Le Pen as the next Joan of Arc? 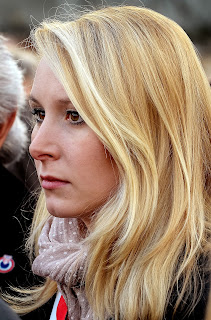 From an overview in the Daily Mail:

While Marine Le Pen hailed the 'magnificent' performance of the National Front last night, it is her niece who has become the poster girl for France's far-Right as the party achieved record gains.

Marion Marechal-Le Pen, France’s youngest-ever MP when elected at 22, is on course to lead the southern Provence-Alpes-Cote d’Azur region with polls giving her some 40 per cent of the vote.

The 25-year-old has emerged as the rising star of the National Front and is seen by many as the ideological successor to her 87-year-old grandfather, National Front (FN) founder Jean-Marie Le Pen.

Marechal-Le Pen is much further to the Right than her aunt Marine Le Pen, who has tried to soften the party’s image and even helped expel her father from the party over anti-Semitic Holocaust comments.

The mother-of-one plays a leading role in anti-gay marriage rallies, backing what she calls the ‘traditional family’.

She insists everybody – especially the five million Muslims living in France – should accept the ‘true French identity’ rooted in Christianity.


If she weren't already married, she sounds like a nice match for one of the Trump men.

She is also outspoken, recently using the word ‘moronic’ while addressing the Socialist prime minister.

‘Marion has dumped her grandfather’s anti-Semitism, but beyond that sounds just like him,’ said one FN source.

She is also adept at invoking the mysticism and legend of the ‘old France’, regularly referring to national heroes such as Joan of Arc.


Speaking of, here's a reminder from the old days when paying tribute to French history invoked its nationalist heroes, rather than its "come one, come all" cosmopolitanism in a grab for quasi-French cultural identity: