When I caught Spectre this weekend, it was the first time I'd been to one of those movie theaters with Starbucks seating -- large comfy recliners in a variety of arrangements, some adjacent all the way down the row, some in a pair (like a loveseat with an optional armrest divider), and some singletons. Kind of like this: 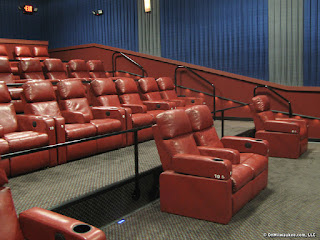 Not a fan of the new seating style (but you already knew that).

The overly comfy recliners made my body feel like I'm at a friend's house watching a late-night movie on TV or VHS, kind of getting prepared to doze off. After a brief experiment with the recliner part up, I kept it down for the rest of the movie.

Overstuffed furniture also keeps you from ever getting that "edge of your seat" feeling. How are you supposed to resonate with the on-screen tension when you're sunken into a cushion-cloud? Worse when the chairs are highback and give you a nice comfy headrest to fall asleep against.

Aside from the construction of the seats, allowing some of the arrangement to be singleton seats and isolated loveseats weakened the feeling of all the audience being part of the same group (unless you were in the traditional row section). It didn't cancel it out, but being that spread-out does take away from the "all in the same boat" experience.

That, too, made it feel more like a teenage sleepover, more informal, where there's a couple people over here, a couple people over there, some others back over there. Not like a more formal and close-together seating arrangement for what's supposed to be a more group-bonding experience than a sleepover -- the pews in a church, the bleachers in a sports stadium.

Attending church services or a football game is not an ordinary experience, and does not take place in an ordinary setting. It's only fitting that the seating be outside of the ordinary as well. Going to the movies is supposed to be that way too -- taking place outside of the home, with seating suited to "audience attending a performance" rather than "group of folks just hanging around," where they're more focused on each other than on the movie.

In short, making the movie theater feel like home makes the experience feel less special, less powerful, and less memorable. It's not unlike the drive-in craze of the cocooning Midcentury. Cocooners just feel too awkward being out in public, so they make the owners of public places re-shape them to feel more like home.

The high points for watching movies as part of a superorganic audience were low points for cocooning behavior -- the 1920s and the 1980s. In the former time, it was the heyday of the "picture palace," while in the latter it was the "multiplex," both attempts at creating a larger-than-life spectacle of the place where we went to the movies.

Central to both types of theaters, or even the relatively more mundane one-screen theaters of the Midcentury, was the seating. Arranged in rows, enough upholstery on the seat and the back to make it comfortable without feeling comfy, backs high enough to support the shoulders but not a sleepy neck and head, shallow seats that everyone can feel on the edge of, and no damn cupholders on the arms.

Cupholders on a chair's arm does make it feel out of the ordinary, but not in the right way. It makes it seem like the purpose of going to the movie theater is to fill up on junk food, rather than to watch a performance. Going to the movies is supposed to stimulate your fight-or-flight system, not rest-and-digest. 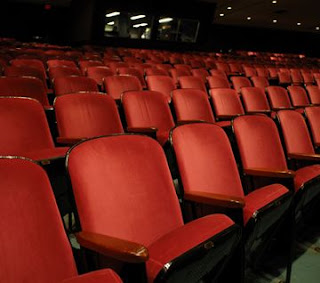 While the overall architecture of the picture palaces may be superior, I actually prefer the spatial layout of the multiplex, which feels like a Gothic castle (or so I imagine) -- first a grand entrance where folks mill around, then a trek down one of several dark tunnel-like hallways, settling into one of many large private chambers for a shared spectacle with the lights off, and then when the movie's over retracing your path during the cognitive and emotional decompression. We need that winding-down experience after a good cathartic movie, not just walking straight out the exit door and emerging instantly back into the ordinary world.

How many other experiences, whether everyday or special, lead you through that kind of layout? If Netflix and Redbox kill off the multiplexes, we are going to lose the only place we have to navigate a dimly lit labyrinth in an enjoyable way.