If you've seen videos of Trump's rallies across a wide variety of locations, you've probably had your first and only glimpse into small-town New Englanders, as well as small-town Appalachians, small-town Plains folk, and so on.

Something about the ones from New England always seemed a bit off to me -- they're much more on-edge and hostile than the ones who show up in Knoxville, TN, or Greenville, SC, or Davenport, IA. And it's not just an East Coast or Northeast thing -- those rude regional traits are due to living in or near huge cities, and having shallow roots in the country (Ellis Island people, or more recent arrivals). The New Englanders from small towns should have avoided those toxic influences, shouldn't they?

It turns out that small towns in New England have only become re-populated since the 1980s and especially the '90s. From the General Social Survey, the graph below shows what percent of New Englanders lived in communities of a given population size (in 1000s), from the 1970s to today (smaller towns are at the bottom, big cities at the top): 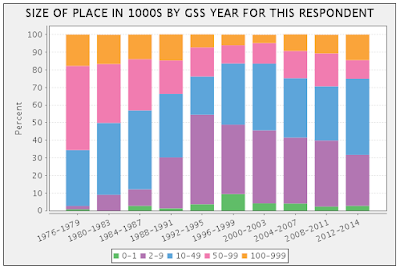 As recently as the '70s, less than 1% of New Englanders lived in a place with 1 thousand or fewer residents, and only another 2% lived in places of 2 to 9 thousand. Nearly 20% lived in big cities (100 thousand to 1 million), and nearly 50% lived in large-ish cities (50 to 100 thousand). Under one-third lived in mid-sized cities (10 to 50 thousand). It shouldn't come as a surprise that one of the earliest sites of industrialization should show such an urban-oriented residence pattern.

But then rising crime rates sent people out of cities and into more sparsely populated areas. In other parts of the country, where rural areas were already well settled, this "white flight" took the form of migration into mid-to-large suburbs. There were already lots of people in the small-town and rural areas -- 40-50% in the eastern half of the country, less so out west. But in New England, the white flighters found almost entirely abandoned small towns and took them over with no competition from rooted locals.

As crime rates have fallen since the '90s, cities have lost the stigma of being dangerous hellholes. So New Englanders have come back to urban areas, although not as eagerly as they fled to the countryside in the first place.

Most small-town residents are native New Englanders (80%), so at least the small towns aren't being picked over by outsiders (just small-scale transplants within the region).

Has anybody tended to stay out in the small areas? The history of residence patterns looks the same no matter what race, marital status, political orientation, or education level the person has. The one thing I could find a big difference for was how often they attend church -- those who attend frequently have moved back to the urban areas the most eagerly, and those who attend semi-regularly have also returned to the cities. But those who rarely or never attend have tended to stay out in the smaller parts.

But remember that small towns in New England have roots that go back no further than one to two generations. Religious people want to fit in with wherever their roots are, and in New England that means cities. People who rarely go to church are already disconnected from one of the central institutions, so they won't mind being disconnected from their community roots either. Or so it appears.

Those who have mostly remained in small towns may not go to church, but they're not mostly atheists or agnostics either. From the '90s through today, residents of towns under 10,000 people, who rarely attend church, are only about 20% atheist or agnostic. Another 20% of small-town rare-attenders are certain God exists, which leaves a majority of small-town rare-attenders who believe in a higher power, believe sometimes, or believe with doubts.

Spiritual seekers who don't actually practice religion, who fled urban New England for abandoned nature, during a wave of Gothic rising crime rates -- it's the Transcendentalist movement all over again.

Just bear this in mind whenever you come across "small-town New England" in the future. It's a recent utopian experiment whose results cannot be judged too well this early. Although given the levels of free-floating hostility that seem to be found there, it's certainly not encouraging. You can take the urbanite out of the city, but you can't take the city out of the urbanite.