More on the politics behind career vs. lifestyle strivers

Just because lifestyle strivers focus most of their status contests in that domain doesn't mean they don't have any time for work. Since they're lifestyle strivers, though, that ought to bias the kinds of jobs they pursue toward the Democrat side.

Here is a post by Andrew Gelman (co-author of Red State, Blue State, Rich State, Poor State) about the changes over time in party affiliation of various occupations. Once the status-striving era kicked off during the 1970s with the Me Generation, a number of changes began. For example, professionals became much less Republican than the national average, while owners and proprietors became more Republican.

It's simple to see the change among business owners as reflecting the take-over of the Republican Party by career strivers. But what about professionals becoming more Democrat? Quite simply, most professional work feels pretty leisurely -- at least for those who pursue it, who respond to their tasks as though they were only part labor and part self-actualization.

Similarly, routine white collar workers have become more Democrat, while skilled workers have become more Republican. Skilled work may be rewarding, but a lot of it is dangerous onerous stuff. You're not doing that to fully cultivate your special snowflake personality, but to ascend the career ladder and make more money. Routine white collar work is like professional work -- go at your own pace, not very tough, almost like you're on leisure time at the office.

Gelman points to an even finer-grained look into the partisanship of various careers, as measured by contributions rather than actual votes. Here are some examples (click the link above to see the full list): 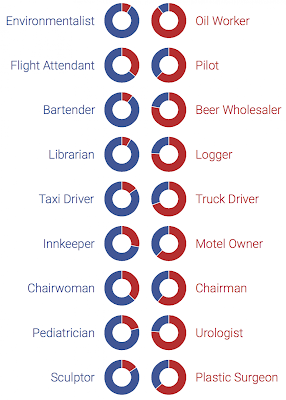 Sure enough, jobs in the leisure industries, and jobs that are half-leisure because the people doing them find them enjoyable and fun in a way, lean strongly Democrat. Librarian (not tough, location is a leisure spot), bartender (nightlife), park ranger (outdoors lifestyle), innkeeper, sculptor, yoga instructor, pro poker player, and assorted professional jobs. Anything involving the arts, leisure, science, intellectual affairs, and so on, will appeal to lifestyle strivers and will therefore lean Democrat.

Who leans strongly Republican? Those whose work is so dangerous, onerous, dirty, disgusting, or off-putting that you'd have to pay somebody to do it -- lots of money, perhaps. Such jobs will involve at most small amounts of leisure, arts, creativity, fun, self-actualization, etc. Urologist, petroleum geologist, logger, pilot, insurance agent, oil worker, truck driver, home builder, plumber, sheriff, cattle feeder, and so on. You only get into those fields for the money, so they will appeal to career strivers and therefore lean Republican.

The distinction between career strivers vs. lifestyle strivers seems to capture more of what's going on here. Other attempts get caught on one or another of the close pairs.

For instance, if it's high-IQ work that makes you lean one way, then why are smarties represented well on both sides? Intelligent lifestyle strivers go into the arts and academia, while intelligent career strivers go into medicine or petroleum geology.

Education level isn't it either.

If it's outdoor vs. indoor work, then why are taxi drivers so Democrat while truck drivers are so Republican? One is in a leisure industry, cruising around, while the other is strictly business. Park rangers and gardeners are Democrat, yet farmers and cattle feeders are Republican. Booksellers are Democrat, and insurance agents Republican. Only level of leisure vs. onerous labor captures the differences.

Male vs. female has little to do with it either, since so few of the comparisons are between jobs with huge differences in the male:female ratio. Taxi drivers and truck drivers are all men, yet the political differences are big.