In the digital age, will we have memorable pictures fit for an album?

I remember as a kid looking through boxes and albums of pictures when the scenes captured on film were scarcely in "the past." Say, the summer vacation, birthday party, or Christmas morning from a few years back. Whenever my family meets up where those pictures are being kept, we still look over them. Aside from those being better times -- mostly the '80s, and when my mom and dad were dating and got married in the '70s -- they are just more enjoyable to look at, out of context.

You can't say that about the gigabytes of digital pictures that you have. You hardly ever browse through them in the short term after taking them, and you aren't ever going to huddle around the laptop with your family and click through image files. Aside from those coming from less eventful times, they just look flat, harsh, and drained-out.

Here is one of the first results that came up for "family picture 2009" on Google Images, and sadly is not unrepresentative of what our pictures look like these days, albeit in exaggerated form to make the points clear. (Click to enlarge.) 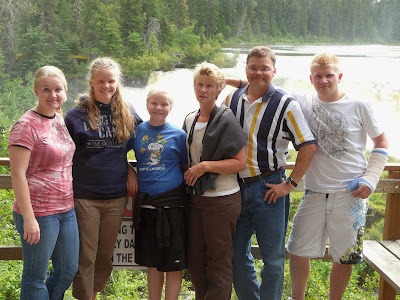 Most notably, the light that should be shimmering on the surface of the lake in the background is blown out, near pure white. Worse, it's bleeding into the white clothing and blond hair of the portrait subjects -- you can't make out the contours of the girl's head who's wearing the blue shirt. This harsh area must take up about one-quarter of the entire picture, too. Nothing like a bigass spotlight shining in your face to make you want to continue looking at the scene.

There's not much range in the brightness levels either, which would have given it a more striking presentation. The lighting is more or less the same intensity, aside from that overexposed lake. Where are the dramatic shadows to counterbalance all that brightness?

The colors don't really jump out at you either. They're not Matrix-level bland, but they aren't vivid.

And everything looks realistically smooth, without the kind of grain that you see on projected film when you go to the movies. The atmosphere looks totally ordinary, hence will not tickle your senses or stick in your mind.

Now for a picture that belongs in a photo album. Here's one of the first Google Image results for "girls 1985" -- 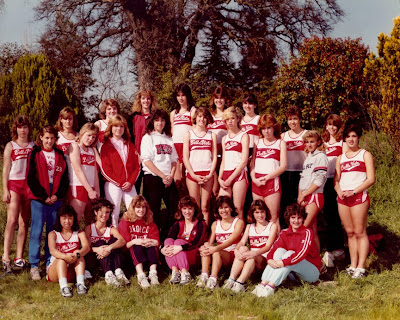 What a world of difference! The whites look pretty bright in the sunlight, but they're nowhere close to being blown out. If you click the larger version, you can make out the details of folds in the fabric of the tank tops, which would be wiped out into harsh, flat white space if this were shot in digital. And look at how much shadow there is at the same time, not just around where they're standing, but the darker cast of the trees way in the back, and the "inner" areas of the trees nearby that aren't at the outer edge catching sunlight. The lighting spans a wider range here, and it gives it a theatrical look.

Colors are lush, warm, and saturated -- welcoming -- and they don't look like something you could just pull up on MS Paint. It looks like there's a red or pinkish cast to the whole picture, too -- probably by accident, but what the hell, it makes it look special.

And there's enough grain to make the atmosphere somewhat hazy and dreamy. It just looks like a memory. Contrast this with the "you are there" photorealism of the first picture, which looks like it was shot for a news item in the local paper (who's going to remember that?).

I didn't say the second picture was going to be hanging in a museum, that's an irrelevant standard. It is the kind of picture that we'd all be happy to keep in an album and enjoy refreshing our memory by pulling it out and huddling around it.

In general, our film pictures look like a stylized portrayal of a reality that we're familiar with, while our digital pictures are more uncanny the more you look at them -- like strange robots coated with passable human skin, changelings of the people and places we thought we had recognized.

I plan to do a longer, mostly image-filled post on film vs. digital photos, as they really exist in our albums and on our hard drives, not hypothetically. In the meantime, here's some further reading on how the two media differ in ways that matter to real-life viewers:

120 Studio has a bunch of informative and lively essay-ramblings, such as this one on the incredible range of brightness that film can capture compared to digital, which easily blows out bright areas. It sounds analogous to the dynamic range in volume that's been lost during the "loudness wars" in the recording industry. He has two broader reviews of the divide here and here.

Here is an even briefer but information-packed guide to the differences from eBay.

And here is a photographer who experimented around with both media using the same subjects and environments. The film shots don't look quite as lush and slightly surreal as the '80s girls track team above, showing that film has changed quite a bit since then. But the differences with digital are still there.