Abandoned building chic during the heyday of latchkey children

Our neo-Pre-Raphaelite culture is fascinated by ruins that have become reclaimed by nature. See, among many others, this photo essay on The Ruins of Detroit. The prevailing atmosphere is one of desolation and isolation, finality and futility. The human race is gone, and it's never coming back. Nature itself is not lush, thriving, colorful, or expressive -- but a cold and impersonal crust blindly accreting and advancing to block out all traces of human existence.

Before this era of bleak chic, abandoned buildings were considered cool not because of their wasteland atmosphere, but because they opened up possibilities for sanctuary, a public place that could be reclaimed by real-life people rather than impersonal nature. Folks whose home life wasn't always secure and stable, i.e. the generation of latchkey children and children of divorce.

Odd as it may seem at first, abandoned buildings were thus a sign of the hopefulness, resilience, and can-do spirit of those who were given the label of "troubled teenagers," "disadvantaged youth," etc. They were places meant to be lived in, taken care of, and enjoyed -- not visited by gawking, clinical tourists who wouldn't touch or move or improve anything for fear of disturbing authentic decay.

With adolescents as the target audience, squatting chic appeared most commonly in music videos. Here's a notable exception for children in movie form, the musty attic above the school where Bastian connects with characters from another world in The NeverEnding Story: 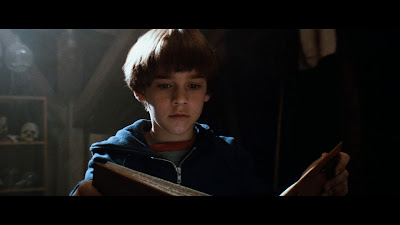 The atmosphere in music videos wasn't always so Gothic, though. The life of squatters is shown as lighthearted and fun-loving, despite their surroundings. Here's the video for "Catch My Fall" by Billy Idol, where the tone is playful in contrast to his earlier video for "Dancing with Myself," which is more toward alienation:

The video for "Nothing at All" by Heart was filmed in the Bradbury Building, a location used in Blade Runner to establish the grungy Gothic mood of the coming dystopia:

In the Heart video, the lighting is still Gothic, but the surface is a little glossier, and the characters are upbeat and happy-go-lucky -- like, "Well, we've got this empty space all to ourselves, might as well make the best of it and have fun together."

Similar scenes from real life can be seen in the documentary Streetwise (see my review here), where one of the teenage runaways is squatting an apartment in an abandoned high-rise, along with his somewhat older hippie housemate. There's a fun shot of the 13 year-old dude roller-skating around the empty, dingy hallways that makes you chuckle at how resilient the kid is, more than feel sorry for the crappy living conditions that he's making do with (which you also feel, of course).

The goal here isn't to catalog every piece of popular culture where fun-loving folks reclaim such a place and make it their own sanctuary, although in the comments I might include other examples that come to mind later. And I figure you all will know of other examples already. The main point to take away is that in a time of social connectedness, even abandoned youth and abandoned buildings could be transformed into a halfway wholesome ecology, whereas in cocooning times, total isolation reigns.