Children of divorce, an unseen historical trend: Is it related to status-striving?

Typically when you look up information on divorce rates over time, you'll see divorces per capita and divorces per marriage, within a given year. Graphing them produces the following: 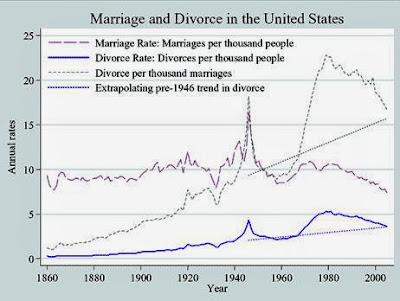 No matter which rate you choose, there's been a secular increase since the mid-19th C. Apart from that, there's an apparent burst from the early '20s through the mid-'40s, a dramatic recovery through the late '50s, another surge during the '60s and '70s, and another dramatic decline since then.

This cycling allows for a half-full or half-empty debate about the state of things recently and into the future. "Sure, that surge during the '60s and '70s was bad, but it's gotten much better since. Maybe it'll surge again, but who can say?"

No such debate can take place, though, when it comes to a more important statistic -- how likely is a child to grow up without both biological parents? All those stats you read about divorces, marriages, risk of divorce for a given marriage cohort, etc., ignore the main worry that the public has about the topic of divorce -- namely, children of divorce.

The General Social Survey asks a question about who you were living with at age 16. I'll look only at whites to make the point stronger. In the graph below, I've recoded responses into living with both parents (red), living with mother with or without a stepfather (blue), living with father with or without a stepmother (green), and other responses (yellow). I've grouped people into 4-year birth cohorts starting with 1900, which you probably won't be able to read without clicking to make the image larger. 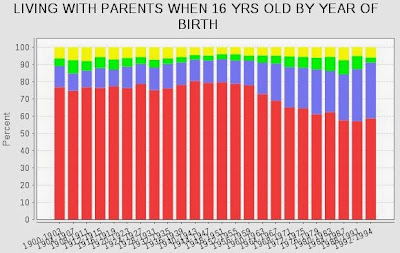 There's a tiny rise in children growing up in intact families, going from those born around 1900 to those born around 1950, but it's only going from 77% to 80%. But it's basically flat at a high level for that entire period. And remember, the question asks about their lives at age 16, so 16 year-olds were still highly likely to be living in intact families into the early '70s (the '56-'59 cohort is barely distinguishable from '40s births).

Then there's a sharp drop with those born in the early '60s, who would've been 16 in the late '70s, and keeps dropping after that, although it may have stalled out at the bottom with Millennials. (Ignore the last cohort, though, since the sample size is tiny.)

So, unlike the picture of divorce rates, which showed a dramatic reversal around 1980 and lasting through today, rates of children of divorce have only gotten worse since those born in the early '60s.

When people argue about whether the divorce problem is getting better or worse, they would seem to be talking past each other. The people who point to the first graph are talking primarily about the fragility vs. stability of the marriage bond, whereas the folks who respond with, I don't care what that graph says, it's getting way worse, probably have in mind the disruption to family cohesiveness.

I put myself in the latter -- marriage is important, but kids growing up in intact families is more. Marriage vs. divorce is about whether two egocentric adults, the husband and wife, can reconcile their differences and stay together. Once kids come into the picture, the egocentric adults are no longer simply husband and wife but father and mother. They have even more other people to take into consideration, and these new ones are defenseless and impressionable to boot. Time to stop thinking only of your own goals.

What's behind these changes? I'm tempted to point to the status-striving / inequality cycle. If some problem started to get bad by the mid-to-late 1970s, and has only gotten worse since, that's a likely culprit. (It's clearly not the cocooning / crime cycle.) We should then see rates of intact families rise during the Great Compression of roughly 1920 to 1970. Or, going from births around 1900 to around 1955. It's there, but very slight. The pattern is a little stronger by adding the red and blue bars together -- that's growing up with at least your mother (both parents, mother alone, or mother and stepfather).

You'd think rising inequality would make mothers and fathers stick together more for the benefit of their children, if they were worried about their offspring doing well in the future. And falling inequality should relax that, with one parent saying, "Meh, it's hard not to earn a decent standard of living these days -- they'll manage."

Therefore, it must have to do with the status-striving that produces inequality to begin with (a la Peter Turchin). One parent starts to feel like they could do better for themselves by splitting off from the other parent, regardless of who gets the kids. This constant monitoring of your prospects for trading up smells a lot more like status-striving. Or, it may not have to do with wanting to leave in order to re-marry or date someone with greater economic resources than your current spouse, but with the drive toward conspicuous consumption and leisure -- both far easier when you aren't held back by the old ball and chain, nor those darn kids who need your time, effort, and money. Whatever the causes, they all seem to stem from status-striving rather than inequality.

Historical research even farther back would be tough because divorce was a much more serious economic disruption before the welfare state. You might look at how common orphans and abandoned children were, though. Those could always reflect parents who just didn't have enough money to raise them -- but then that's always relative to how much the parents feel they need to spend on themselves. "I just wouldn't have enough to buy diapers every month and still shop for groceries at Whole Foods," or whatever the equivalent was in the Gilded Age. And then again, maybe the children were abandoned because one of their parents was too obsessesed with status-striving to rear their own offspring.

Our vague impression of Victorian England and the Gilded Age in America is full of children who don't live with both mommy and daddy --  all those orphaned and abandoned characters from Dickens, and Tom Sawyer and Huck Finn. But some numerical data would be nice to confirm that impression.

I'm becoming more convinced that conservatives who apologize or cheerlead for the Victorian era don't have a clue what kind of society they're defending, except for the cynical rats among the elite who want another Gilded Age where they're on top of a steep pyramid. Below are a few signs that the Gilded Age didn't care hardly as much as the Fifties did about keeping families together. The scenes are of New York in the 1880s, from How the Other Half Lives by Jacob Riis. 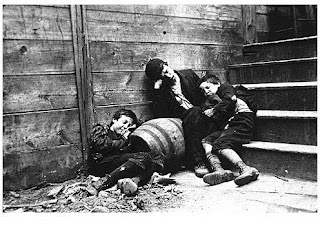 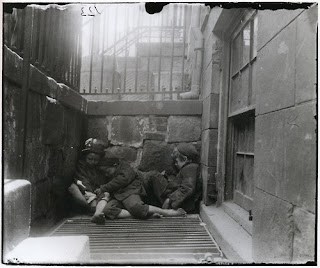 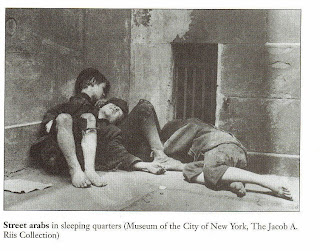