In the post on the return of old diseases and pests with rising inequality, someone in the comments asked about the obesity epidemic, which also began around the time that inequality began rising -- the late '70s and early '80s.

That definitely is one of the most striking class divisions nowadays -- poorer people are fat, while wealthier people are thin. It certainly wasn't like that in the '50s when the classes were much closer to each other in material terms.

Rather than look at obesity, which is affected by several factors, I'd rather go straight to the diet itself. We also have data going back much further on food availability than for obesity. Here is a post reviewing historical data on the availability (per capita) of different food types in America from 1910 to 2007 (the source is the USDA). We infer amount consumed from amount available; changes in availability track changes in consumption.

If we want to look at a single measure of nutritional well-being, we look at red meat. In the Peter Turchin review of the longer history of cycles in inequality, he too looks at meat consumption as an indicator of how well-off folks were. Here's how it changed over the last 100 years: 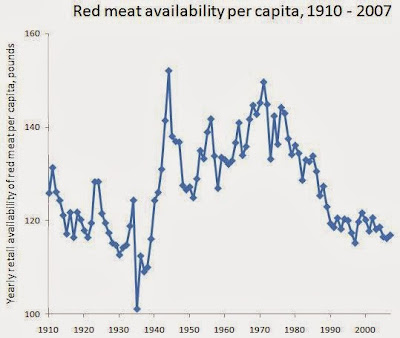 It does show a steady decline during the recent widening of inequality, whereas it had been rising throughout the mid-century as inequality was narrowing. Meat consumption had fallen earlier as inequality was rising toward its peak circa 1920. That fall lasts a little longer than expected, not turning up until the late '30s, noticeably after inequality had begun to narrow. (Some but not all of that could be related to the Great Depression.) Overall, though, the fit is pretty close.

Since the top levels of the income pyramid had enough to buy red meat, the large swings up and down reflect the dietary changes of the middle and bottom levels. Meat is not a far-out-there luxury item that only sells more when there are more millionaires. Its sales depend on how well the average family is doing. Is the son going to have steak several nights a week, or will he be nuking a bowl of Ramen noodles and washing it down with a Mountain Dew?

I won't re-post all the graphs here, but going through the rest of them...

- Dairy shows a positive link with inequality, as though middle and lower-income folks are substituting dairy for red meat when times are harder for them. That's what cattle-herding people do around the world -- if you come into a windfall, feast on meat, and otherwise drink milk.

- Eggs don't seem to be related one way or the other.

That may sound better, but remember that most of that increase is due to a soaring amount of it being poultry -- i.e., 99% fat-free boneless skinless chicken breasts -- and less coming from beef. Lean chicken won't provide much of the essential fatty acids, or allow your body to absorb the fat-soluble vitamins (A, D, E, and K). Fat also has more than twice the calories per weight as protein, so switching from red meat to chicken reduces caloric intake. Chicken also has lower concentrations of vitamins (like B-12) and minerals (like iron) compared to beef. In all, the shift away from red meat and toward white meat has been for the worse.

- Fruit and vegetable consumption has gone up since 1970, but you don't get much out of those foods.

- Grain and potato consumption looks directly related to inequality as well, rising since about 1970, and falling during the Great Compression. However, that decline began at least as early as 1910, when there was still a good 10 years left in the rising-inequality period. Still, a very close fit. As with fruits and vegetables, you don't get too much out of these foods, other than sheer calories and a mega-dose of glucose, and all the metabolic problems that brings.

Taking all of that into account, it does look like diet quality takes a turn for the worse (i.e., toward vegetarianism) when inequality is widening, and becomes more wholesome when inequality begins narrowing. As always there are other factors that help to explain why those food availability graphs look the way they do -- but it's striking how much you can capture just by pointing to the rising or falling trend in inequality.

Wide variation in basic physical appearance is one of the most alienating forces -- "those people just don't look like us," and sheer size is hard to miss or dismiss. You may not feel the alienation from seeing luxury shoppers pass by homeless pan-handlers unless you live in a city, but everyone is surrounded by disparities in weight, so it's hard to ignore how far apart the classes are separating. As Robert Putnam's work showed in a multi-ethnic context, wider diversity means lower feeling of community.

That point is either under-appreciated, ignored, or outright denied by mainstream conservatives -- that inequality leads to a breakdown in community, through a similar process as ethnic diversity weakening communal bonds. But that's for another post.

We should ask how deliberate the elites have been in fattening up the middle and lower classes of our society. They were the ones who pushed this meat-phobic, fat-phobic, low-cal, grain-fruit-veggie dogma on everyone else, right as inequality began rising. Sure, the elites themselves drink their own organic kool-aid, but they still eat a lot of red meat, cheese, eggs, and so on. Whereas the lower classes take the anti-meat message seriously, and load up on processed carbohydrates instead.

There's likely a class difference in preferring meat over starch-and-sugar, but even allowing for that weakness among poorer people, the elites should then be even more careful about preaching a carbo-holic diet and demonizing meat. Wittingly or not, this boneheaded vegetarian crusade has become a tool of class warfare.

And part of the increasing junkiness of lower-class diets reflects a drop-out mentality when they perceive the deck to be stacked against them as inequality widens. Fuck it -- why try and be healthy when nothing matters at the end of the day, when we're going to be even worse off next year? Maybe to try and keep up appearances, to keep ourselves presentable to others? Screw that, too, if our superiors are going to act antagonistic and snotty toward us in the first place. I don't care who sees me looking fat and disheveled in public, when none of them give a damn about me anyway.

I don't really agree with or resonate with those sentiments, but it's not hard to see where they come from, and how they would abate if we all ate better, instead of income inequality polarizing the distribution of fat across the classes.