Fashion cycles are commonly thought to not reflect the broader social context, or if they do, that it must reflect economics. But the economic picture doesn't pop out of most cultural things that you can chart over time. Rather what links so many zeitgeists that are temporally far apart yet conceptually close, is the trend in the crime rate, rising or falling.

You can see that in all of the conscious and particularly the unconscious rebirths of things that were popular back in the mid-20th century. Buildings that aim to be nothing more than big dumb ugly glass-and-concrete boxes, the drive-in fast food place, 3 hour-long epic movies, 3D movies, pop music that is either drowsy or cacophonous, and on and on. For reasons I've explored elsewhere, these things seem to stem from the falling crime rate of both periods.

I've found that trust levels are a leading indicator of the crime rate, for reasons explained elsewhere. However, I only have data on trust back to the early 1970s.

For data that stretch back far into the past, there's the age structure of the population -- basically how youthful it is. More youngsters = more crime. That's useful because we have pretty good data on age structure, so if there's a rise in the youthfulness of some society, we can begin preparing for greater violence and crime ahead of time.

How about something more eerie? I don't pretend to understand the mechanistic link between this variable and the crime rate, but it does appear to predict the trend in the crime rate, even within a decade. And that variable is the share of baby girl names that end in a long "-ee" sound. That's the standard diminutive suffix in English, things that we want to make sound small, cute, familiar, informal, etc. Perhaps parents give girls those kinds of names when they're more trusting, as trust also is a leading indicator of crime.

Well, here's another apparent leading indicator from the world of baby girl names, only this one is inversely related (when it goes up, sometime soon the crime rate will go down). And that is the number of the top 100 baby girl names that end in the sound "lyn". (I ignored spelling variations of the same name, and only counted distinct names.) Here's the popularity over time, measured every 5 years: 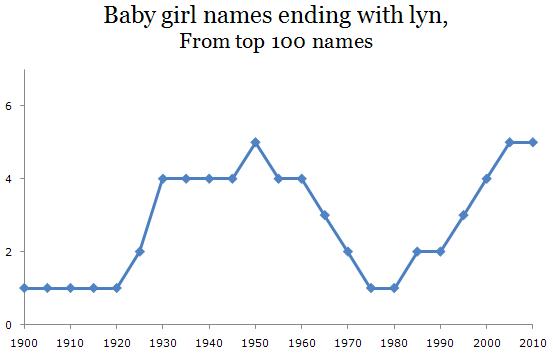 In 2010, the top 100 girl names included Brooklyn, Evelyn, Jocelyn, Madelyn, and Kaitlyn (and some spelling variants). The same was true back in 1950: Carolyn, Marilyn, Lynn, Evelyn, and Jacqueline. That cluster of names sounds unusual to someone born in 1920 or 1980, when only 1 such name broke into the top 100 -- Evelyn and Jacqueline, respectively. Not only has the cluster undergone a revival, but even particular names that looked to be gone forever have been reborn, such as Evelyn, which started to soar in popularity starting in the late 1980s after decades of decline.

Well, you got me. To keep my story simple, I'd prefer to relate it to trust levels, as I did when I took a stab at explaining the other naming/crime relationship. There, the stuff about the diminutive suffix is reasonable enough. But what about "lyn" is already out there? It is probably part of a larger pattern that I just haven't measured yet, like a name that rhymes with "in". Maybe it's a short vowel vs. long vowel difference. Short vowels signal a withdrawal of trust, and long vowels a rekindling of trust? Who knows. I'll poke around the data more and see how big the pattern goes before I try to link it to trust, crime, etc.