Sweet, naive, trusting, and above all likable, the ditz represented the extreme tail of the bell curve for self-consciousness, namely at the opposite end from hyper-self-aware. She was not socially awkward like a nerd, sperg, or other weirdo -- her wiring was fine, it's just that she was running on auto-pilot most of the time. Her mind was never blinded by the spotlight of self-monitoring, although that meant that it would often look like the lights are on but nobody's home.

Quite a few female characters from '70s, '80s, and early '90s TV shows were, like, totally ditzy, however exaggerated it may have become as the series ran out of jokes. And they weren't just teenage girls like Mallory from Family Ties, Kimmy from Full House, and Kelly from Married With Children. They were in their 20s like Chrissy from Three's Company, Hilary from the Fresh Prince of Bel-Air, and Lucy from Twin Peaks. And they were still spacey even during middle age and retirement, like Edith from All in the Family and Rose from Golden Girls. The whole society back then was just a lot less self-conscious.

The fundamentally wholesome nature of the ditz can be contrasted with the sassy, jaded, cynical, and repulsive nature of the oh-so-self-aware diva who has become a cultural mainstay over the past 20 years. When the writers and actresses do attempt to portray a ditz, their heightened self-consciousness turns the character into a blackface version of the ditz, snarky and stupid.

In fact, the writers and actresses have opted more for a different character type altogether, what the TV Tropes people call "The Brainless Beauty". In their minds, self-awareness = reflection = reason = intelligence. And so, ditziness = go-with-the-flow = intuition = stupidity. Where the older type was scatterbrained, her replacement is downright moronic. She cannot therefore be likable, except in the sense of refraining from looking down on her because she can't help being an idiot, and laughing at her wouldn't be nice.

Looking through the examples of "The Ditz" in the TV Tropes list, it seems like most of the ones from the past 20 years are closer to the type who is dimwitted and unlikable, or at best inoffensive, like Phoebe from Friends or Karen from Mean Girls. The only genuine exception is Cher from Clueless; she was a real breath of fresh air in the '90s, the last wholesome-ditzy kind of girl.

Ironic ages are so poor at irony because the background level of self-awareness makes the delivery too on-the-nose. It requires sincerity to appear unrehearsed, and the ditz's delivery was beyond understated. No one did it better when it came to oblivious double entendres. 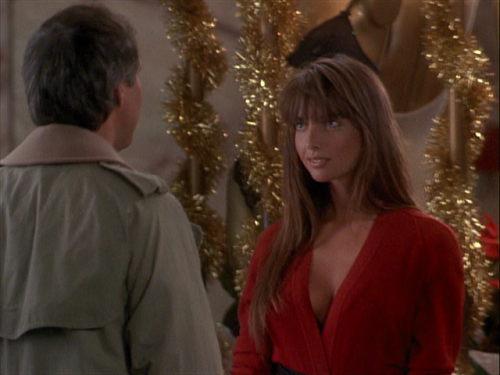 Is there something I can take out for you?

Does the decline of the ditz reflect a real-world change, or was the character type just some Hollywood fad? It sure seems real to me. I remember ditzy girls in elementary school (later '80s, early '90s), not to mention among the teenage babysitters that I and my friends had. And even though I didn't know them, random girls at the mall often gave off a ditzy vibe, that strange spacey look on their face where they're cruising through daily life without a navigator who's fully alert.

There were a few ditzes left by high school (later '90s), but at my school anyway they caught so much shit, it must have ultimately woken them up from the dream-state. Clueless and kind-hearted was out, savvy and sassy was in. By the 2000s, I don't recall any true ditzes among the students I tutored, or among my fellow 20-somethings, let alone among older women. I'm sure there are still a handful drifting around out there somewhere, but even if you wanted to find out where, they wouldn't have the presence of mind to send up a flare to let you know.

Although the ditz may be dead for now, I wouldn't be surprised if she showed up again the next time the crime rate starts rising for awhile. I don't recall seeing ditzy female characters from the culture of the mid-century, although there are several in Fitzgerald's short stories from the Jazz Age. As a matter of fact, the actresses who played the two older ditzes from the last heyday (Edith and Rose) were both born in the first half of the 1920s, making them part of the Greatest Generation, who are the counterparts of today's Generation X and Gen Y, based on where they were born in relation to the peak of the crime rate. Ditziness seems to have largely skipped the Silent Generation, who appear to have been more self-conscious as teenagers. Ditto the Millennials, who are their contemporary counterparts.

In the meantime, let's remember how pleasant these girls were to interact with. The ultimate in easy-going, you could play any tune, and they'd happily dance right along. Indeed, their largely reactive nature in social situations required that the man take the lead, the exact opposite of the self-aware diva, whose courtship behavior consists of either bitchily pushing men away or sleazily seizing them by the arm. And although their scatterbrained behavior made them a little unreliable, their trusting and amiable nature still made them good friends and co-workers, especially compared to those who are unreliable due to their Machiavellian mindset.

In the good old days, even the least desirable of the common female character types was still harmless and wholesome.