The return of sincerity, now and then: A backlash against the Christmas sweater backlash

I don't know if you guys visited any clothing or department stores when you were out gift shopping, but I couldn't believe how many winter / ski / Nordic / Fair Isle / Christmas sweaters were on display non-ironically. Actually, not very many per store, but still -- greater than zero.

And not just in the Polo and Tommy Hilfiger sections, where they've always remained for aspiring preppies. Even Urban Outfitters had about a half dozen. I picked up two that had a cool American Southwest feel, whether in the color palette or the pattern, our own regional version of a Northern European tradition. 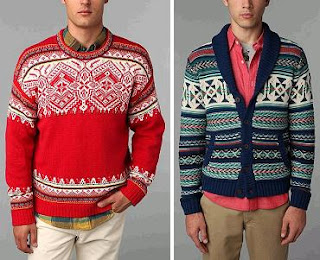 Well, that's Urban Outfitters, and they've always catered to the vintage-loving crowd. What about some place more trendy and "fashion-forward" like H&M? They had a few, too, including this cardigan that I snagged as a gift for my mother: 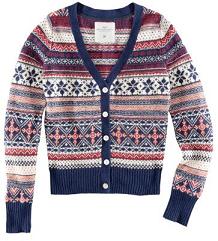 In fact, here is a 2011 post from some fashion site, whose Facebook has over 60,000 likes, daring the readers to go ahead and wear something chic and charming when they attend their friends' ironic ugly sweater party, showing 10 examples. And the snark brigade is so uptight that they'd take it personally -- "oh my gosh, did you seriously just go there? wow, i guess you honestly don't mind being 'that girl' at the party, do you?" Good: nobody deserves having their party pooped on more than the party-poopers.

So, is the 20 year-long decline of sincerity finally done with? Well, it's probably got a few more years to go, but the widespread re-introduction of non-ironic Christmas sweaters is a hopeful sign that it's at least bottoming out.

This takes us back to the '50s all over again. Fair Isle and similar-looking sweaters were all the rage during the 1920s and early '30s, then fell out of favor during most of the mid-century. They went against the minimalist aesthetic of the day, having too much and too many colors, repeating patterns, and the dreaded traditional feel no longer suitable in a World of Tomorrow kind of world. Not to mention the aversion to anything with a hint of sentimentality, in the era of the Three Stooges and the Marx Brothers. Sound familiar?

Here is a digitized online collection of old Sears Christmas catalogs. By the 1952 edition, there are zero Christmas sweaters for sale, not for men, not for women, not for children. The next one they have online is the 1956 edition, and by then they'd begun to creep back in, though only for men. Women's sweaters were still just about uniformly devoid of any pattern, or of multiple colors. From the '56 catalog:

Just a few years later, the return has grown even stronger. The caption for the sharp-dressed father and son opens, "Glowing with color, reflecting the warmth and spirit of winter sports... Norwegian ski design favored by color-conscious men." From the '58 catalog: 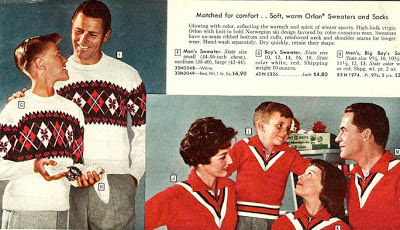 Through the end of the '50s, women still couldn't break free from their conformist wallflower tendencies and join the men in wearing festive sweaters during the Christmas season. Once the 1960s got going, though, they couldn't resist any longer. The '60 and '61 catalogs are not online, but the one from '62 shows several  for women. Most are part of a his-and-hers set, as though they needed to be guided into it, but a few pictures show women wearing Christmas sweaters on their own.

By the mid-1950s, the stifling atmosphere of the previous 20 years (after the death of the Jazz Age) had grown tiresome -- for some, anyway, and most of them men. Not only did the sincere fun of sporting Christmas sweaters begin to make a long-awaited comeback, but they started to grow restless with the corporate slave culture, as shown in the hit novel and movie The Man in the Gray Flannel Suit. Sound familiar? Hopefully it will pretty soon now.

Personally I find it heart-warming to look at the birth years of those involved in this initial push away from mid-century managerialism, obsequiousness, drabness, and insincerity. The major forces behind The Man in the Gray Flannel Suit, both the novel and the movie, The Apartment, The Lonely Crowd, the 30-something men in the Sears catalogs -- almost entirely come from the later part of the Greatest Generation, mostly from the late 1910s through the mid-'20s, with a few going back to the late 1900s.

Based on where they were born in relation to the peak in the crime rate, which largely determines the zeitgeist, those guys correspond to men born mostly from the later half of the '70s through the first half of the '80s, with some going back to the late '60s. I.e., Generation X and the smaller Gen Y. Not the Silents, and not the Millennials.

We're old enough to remember what high spirits our communities used to be in when we were children, we had to suffer a good part of our young adulthood in the opposite place (the '90s and after), yet we're still young enough to feel like there's something left worth fighting for, not just "Well, I had my fun in the '60s, '70s, and '80s, so I can't get angry about where things are headed."