Having tossed around the idea that men looked more fit overall during the 1970s and '80s from playing racquet sports, let's take a look at how popular and culturally influential they have been over the decades.

There is a clear long-term cycle of ebbing and flowing popularity, a historical pattern that we ought to find more fascinating than one damned thing after another, one-way rise, or one-way fall. Cycles provide so much variation for us to account for, while limiting our harebrained guesses as to what's causing them, in a way that studying one-way trends cannot. (You can point to any of a zillion other variables that also moved one way during the time, and are generally left with subjective argument about what is "more plausible" to whittle them down to your preferred story).

For this post I'll restrict the focus to how popular racquet sports have been in American culture, although in a future post I might try digging through some data on participation rates across time. First I'll present the basic picture of their popularity, and then throw out some guesses as to why they've cycled in the way they have.

Starting with the present, the most recent craze for racquet sports that I remember vividly was racquetball. You don't hear or see much about it anymore, and it's not as though it's been replaced by a brand new racquet sport. Below is a graph showing how common the word "racquetball" has been in Google's vast library of digitized books and periodicals. (From the Ngram website; click to enlarge.)

It shows tremendous growth during the '70s, a plateau from the later '80s and early '90s, and a steady decline since then. So, at least to judge by the impression it's left in the print media, racquetball was mostly a phenomenon of the '70s and '80s. Most people who have memories from that time will find this unobjectionable, but it's worth trying to document its rise and fall quantitatively.

And it wasn't just writers of books and articles who took notice of the racquetball craze. Iconic scenes can be found in the hit movies Manhattan and Splash (with John Candy smoking during the game, wondering why he can't get into shape), and children could play the sport in video game form on the Atari 2600. 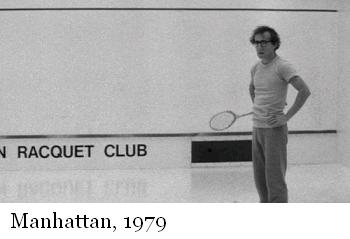 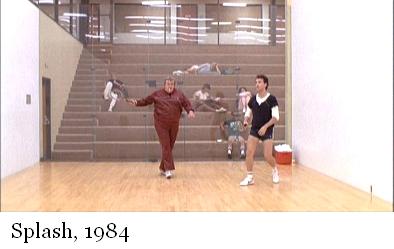 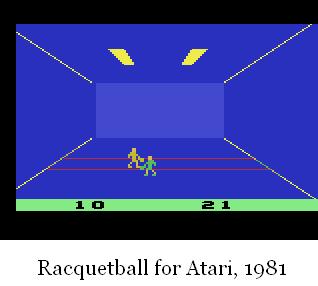 Speaking of iconic '80s movies with Tom Hanks, what about that scene in Big where a fight erupts over a game of paddleball? 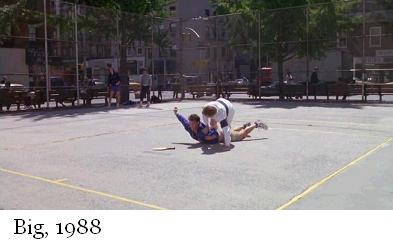 I didn't even know what that game was called before doing research for this post. It's played mostly in the New York metro area, and so adds to the movie's sense of regional authenticity, also enhanced by shots of a summertime carnival at a local boardwalk, the toy mecca FAO Schwarz, and a crazy black bum shouting "I'll kill the bitch!" to himself while marching down a Manhattan street.

It looks like paddleball was most popular during the '70s and the early '80s, more or less when racquetball was.

The sport most similar to racquetball, though, is squash -- a name I've heard of for awhile, but never actually seen in real life. It's no wonder, as its heyday is long past. In searching Google's library, I couldn't use just "squash," which has too many meanings, so to narrow it down I searched for "squash rackets". (A graph for "squash racquets" shows basically the same picture.)

Its popularity got going around the turn of the century and peaked in the mid-'30s, and although it has never made a comeback since, its brother-sport did during the '70s and '80s. So, squash was the racquetball of the Jazz Age, yet another point of cultural kinship between the Roaring Twenties and the Go-Go Eighties. The New York Metropolitan Squash Racquets Association was founded in 1924.

However, no sport symbolizes Jazz Age glamour and dynamism more than tennis. The two players below, Rene Lacoste and Suzanne Lenglen, were not only major sports celebrities of their day, but also fashion trend-setters. Lacoste developed the modern polo shirt, and his tenacity on the court earned him the nickname "the Crocodile," an image that still remains in logo form on polo shirts across the world. And Lenglen was part of the broader movement for women to wear less restrictive clothing and to show more skin. She played with bare shoulders and a skirt that revealed the leg above the knee, something unthinkable even a few decades earlier. 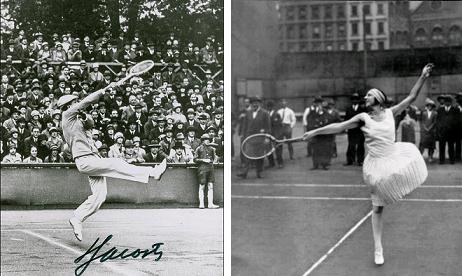 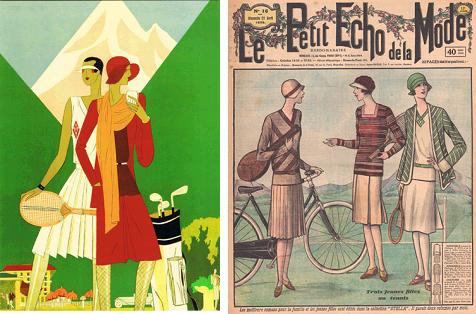 Vogue magazine put together a brief review of the influence of tennis on modern clothing styles, one of a series in what they call "turning points" in recent fashion history. Greater participation by women in sports seems to have the greatest effect, since the functional demands of the sport allow them to wear less restrictive clothing than would be possible in an everyday setting. But, once they get used to greater movement, grace, and style on the court -- why not take it off the court too?

This introduction-via-sports makes the shift in everyday styles less abrupt, less confrontational, and less self-conscious. The gradual, "we didn't intend it, but why not?" nature of the transition allows the mainstream to accept it -- not just the men, who generally don't mind seeing a little more skin, but especially the older female guardians of modesty. Indeed, it's the old nuns at the Catholic school, or their matronly counterparts on the streets of Tehran, who most zealously enforce dress codes, to give only two examples of a universal pattern.

As for its popularity in the print culture, tennis shows a clear cycling pattern:

It rises through the mid-late-'30s, falls through the early '60s, rises again to a plateau around the late '80s and early '90s, and has fallen again since. Perhaps not surprisingly, more or less the same pattern shows up for "Ping Pong" as well:

Ping Pong also rises through the mid-late-'30s, falls through the late '50s, picks up again during the '60s to a peak in the mid-'70s, and despite a slump through the earlier '80s, bounces back for one last hurrah through the early-mid-'90s, declining since, though not so dramatically. (You wonder how many of the hits from the last decade are actually part of a piece about beer pong, the boring drinking game.)

The weakest example of the cycle is badminton, perhaps because it's never been very popular in the English-speaking world, and seems to thrive more in East and South Asia. It's also the least explosive of the four major racquet sports. Nevertheless, the pattern isn't so unfamiliar: a rise from the turn of the century through the early '40s, a decline through the early '70s, another rise through the early '80s, and another decline since.

Taking all of these various racquet sports into account, and giving greater weight to the more common ones, the overall smoothed-out pattern seems to go like this: a rise from the turn of the century through the mid-'30s, a decline through the early '60s, another rise through the mid-'90s, and another decline since.

Is there a single variable that shows roughly the same up-and-down timing as the popularity of racquet sports? Yes, and as usual around here, it is the crime rate. The cycle for racquet sports seems to be delayed a few years after the cycle in the crime rate. That could either be due to a delay in reporting on a trend -- still focusing on it even a few years after it's begun to decline, since they can't yet tell the decline is a long-term one -- or a continued interest even a few years into a falling-crime period. Since we're taking a rough look anyway, I'll treat these cycles as happening more or less at the same time.

Why do racquet sports become more popular in rising-crime times, and less in falling-crime times? Well, they are probably part of an even broader pattern of greater interest in sports and fitness during rising-crime times. The turn of the 20th century through the early '30s was witness not only to a craze for tennis, squash, and Ping Pong, but also for baseball, football, golf, sprinting, swimming, and boxing.

Ditto for the '60s through the early '90s -- baseball and especially football shot through the roof, boxing and golf both woke up from their mid-century slumber, aerobics introduced intensive movement to women, everyone piled into the public pool during the summer, and Chariots of Fire revived the Jazz Age love of sprinting.

During the mid-century, and over the last 20 years, Americans seem less interested in sports. You generally don't tennis courts, tennis players, or tennis instructors in an episode of I Love Lucy or The Three Stooges, and these days people are aware of who Tiger Woods and the Williams sisters are, but really couldn't care less. And where is the Mike Tyson phenomenon in mixed martial arts? The few activities that have gained a mainstream following are individualized and non-explosive -- yoga, jogging, "working out" at the gym (although weight-lifting may get intense).

Falling-crime times are more low-key, slow-paced, and even apathetic, so the energy and intensity of sports begin losing their appeal. The doping scandals of the past 20 years have added an extra layer of cynicism that was absent during the mid-century lack of interest, but the fundamental relationship seems to be falling crime leading to greater apathy about sports.

Unlike a safer and safer world, rising-crime times require you to be in a more excitable state, physiologically and psychologically. This is not only to be more aware of possible threats to you yourself, but more importantly to participate in a wider vigilance as neighbors look out for neighbors, and as the great majority band together for mutual support against an increasing chance of being preyed on by criminals.

So, people's minds and bodies are prepared to welcome and even seek out intensive, social sports. They are not part of some narcissistic plan to "look good naked," but the pursuit of overall fitness. Let's face it -- most of us who aren't professional athletes must feel some kind of greater challenge from the environment to get us up and active. And like it or not, one of the best motivators to get into shape is the sense that you may be put physically to the test out there in a potentially violent situation, whether a threat to yourself or standing up for someone else.

We may find the violence itself repellent, but we shouldn't overlook how our responses to the challenge of rising crime ultimately strengthen our minds and bodies, and even our social and cultural bonds. During the '20s and the '80s, it's not as though the murder rate had regressed to pre-modern levels. It was more like the process of bone and muscle-building, where just enough environmental stress is needed to get it into optimal shape, neither overwhelmed and broken nor padded and atrophied.