I just got through with a book on the history of the bra in America, but it'll take awhile to find enough pictures and select quotes to put together a whole post on bras and breasts. In the meantime, I've noticed two other weird contemporary things that turn out to be throwbacks to the mid-century.

First, take a look at Marilyn Monroe's preferred footwear. Lucite heels were big in the 1950s, not just with her. Do a google image search for Marilyn Monroe heels to see many examples, including these two: 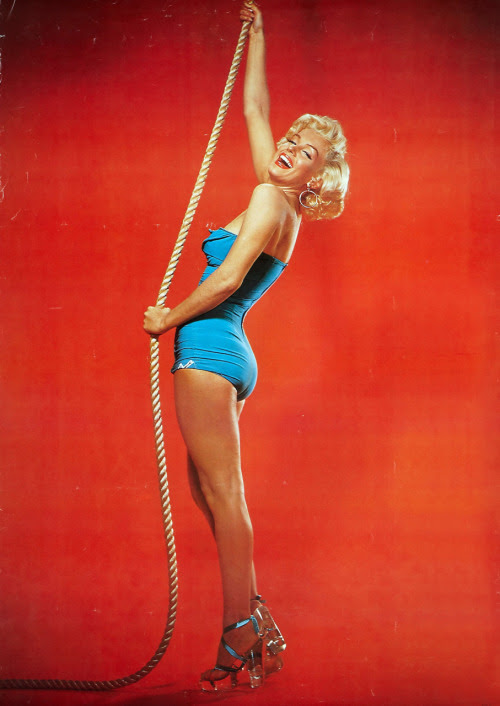 When did clear heels become the new whore uniform? When did that happen? Was there a big ho convention and all the hos got together and said, "We need something new. Something that just says nasty" … And one girl said, "I got it! Clear heels!" "Uh, girl you’re disgusting!" [Chris Rock]


Don't ask me what specific features about clear heels make them unwholesome, but strippers couldn't have chosen them for no reason. The mid-century was also big on the burlesque, striptease, girlie show, pin-up, look-but-don't-touch kind of female attitude that we suffer from now. Similar mindsets will choose similar fashion accessories.

In 60 years, do you think it'll be common knowledge, even among those who study the pop culture of our time, that in the early 21st century, clear heels = stripper shoes? Most will probably look at non-strippers wearing them and have no strong reaction of "Why did they wear such sleazy shoes back then?"

Second, here's a 1950s ad from Frederick's of Hollywood hawking a pair of briefs with some serious junk-in-the-trunk padding: 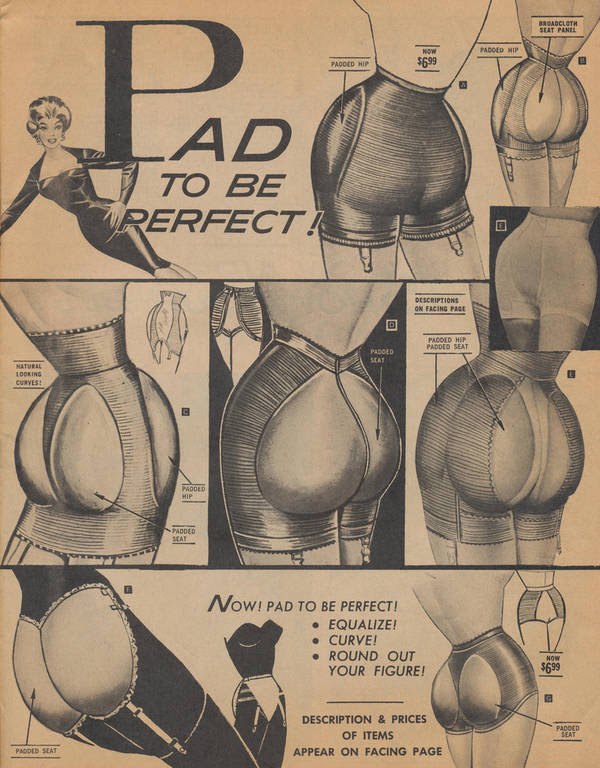 They were the major lingerie retailer before Victoria's Secret, so this thing has to be fairly representative of what customers wanted back then. In the 21st century, these things have become profitable again, at least to judge by their being advertised in Southwest Airlines SkyMall catalog.

Today we attribute the craze for plump rumps to something having to do with race -- Sir Mix-a-Lot, J. Lo, Beyonce, Shakira, etc. But back in the '80s black girls didn't have jungle booties, so it's not a race thing. Looking back at the mid-century, it definitely was not a race thing. It was Marilyn Monroe, Lana Turner, et al., who women wanted to look like -- shapely white girls. And if women were willing to pad their bra with "falsies" in order to keep up with the ideal (more on that in another post), then why not wear padded briefs too?

I certainly wouldn't mind the sight of women wearing those things, but only if I didn't know what was really underneath. Seeing butt-padded briefs, stuffed bras of one kind or another, shaved pubic hair, etc. -- it all signals a heightened self-consciousness on the girl's part. Like she's so nervous she won't measure up that she has to resort to elaborate tricks to distract and fool the viewer. You can't give off an unwholesome vibe if you lack self-awareness (one of the great things about ditzy girls is how wholesome they appear).

Ultimately any guy who she goes all the way with will see her natural body, so why be misleading in the meantime? These things aren't like make-up: they're making a substantial alteration of her body type. Clearly the bootylicious briefs are designed to deceive or manipulate the perception of men who won't actually get to see the real thing. They're for self-consciously drawing male attention to your tits or ass so that you can string them along and have them do your bidding, while they drool stupidly.

There really does seem to be a cynical, almost Machiavellian approach among women in the mid-century as far as displaying themselves to men was concerned. Like, "Well you know men -- always thinking with their dicks, so if you need to recruit them in reaching some goal of yours, just stuff your bra, pad your seat, and put on a caricatured pin-up smile. Hey, a gal's gotta do what a gal's gotta do."

You can pick this up, less severely, in the lyrics to the early '50s Doris Day song "A Guy Is a Guy". There's a throwaway reference to marriage at the end, but for the most part it sounds cynical, self-aware, even sleazy (without however being obscene like it would today). During the romantic '80s, you didn't hear that kind of attitude. (And no, that "I Know What Boys Like" song doesn't count, since it wasn't a #4 hit on the charts from a major singer, but a dud from one of the few unlikable new wave groups on the fringe.)

Anyway, more to say about these topics when I get around to writing up the stuff about bras.