I don't go out to the movies much anymore because they've become so boring. This summer, however, I did head out to see The Dark Knight Rises three times. It struck me how long it was -- not because it dragged (it flowed well), but because I don't recall movies being that long.

Having seen so many similarities between this age and the mid-20th century, I pursued a hunch that movies were probably very long back then too, but not during the Jazz Age or the '60s-'80s New Wave Age. Although not having seen them all myself, I've read in many places that mainstream movies had gotten so bloated, ponderous, and epically pretentious by the early '60s, that the New Hollywood movement some years later felt like breath of fresh air.

Getting good data to settle the matter is easier if we stick to something objectively measurable, so why not running time? As mentioned above, not all long movies are boring. But very long movies certainly do try your patience. In fact, I'm not sure that boring vs. exciting is the right way to look at the shifts. It's more like compact and arresting vs. diffuse and letting-you-be. (Although for people who like striking movies, the longer ones will often feel boring.)

Basically, people in falling-crime times do not want to be excitable or feel out-of-control emotionally, for example getting taken ahold of by a movie or song. It's part of their detached, cocooning psychology and behavior. A slow, thinned-out stream of words and pictures will make sure that the work never exceeds a certain emotional threshold to strike a chord in the viewer.

People in rising-crime times are the other way around, preferring things that get you worked up, that get you engaged and involved, and that therefore leave a lasting impression. This stems from their different attachment style, wanting to "bond" closer with the elements of their culture. It's easier to accomplish this by concentrating the ingredients of your artwork, for example by keeping it short, so that it packs a stronger wallop.

Below is a graph showing the median running time of the top 10 movies at the box office for the year. See footnote for more on methods. * 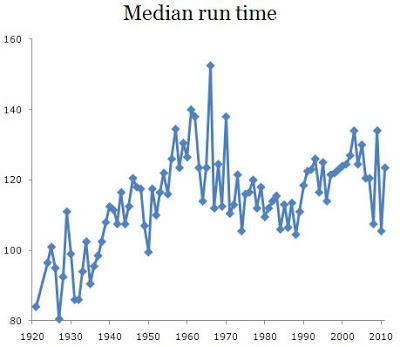 And from the following graph, which shows the longest and shortest running times for each year, we see that the oscillations in the graph above reflect a yo-yo-ing of the upper limit, whereas the lower limit rose to about 90 minutes and has stayed there ever since. An hour and a half is the stable bare minimum for a blockbuster movie, but how far you go from there is up to the zeitgeist. 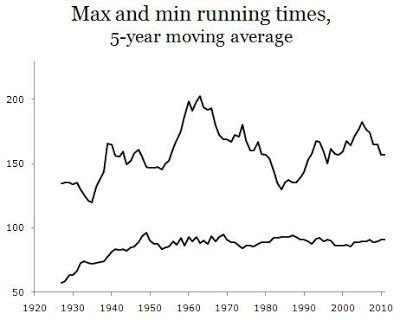 So, here we see yet another example of the similarity between rising-crime periods and between falling-crime periods. Movies of the '20s and early '30s were fairly short, and there is no identifiable rising or falling trend in their lengths. Dracula (1931) is only 85 minutes long, and The Jazz Singer (1927) is 89. Even those at the long end weren't so long: King Kong (1933) runs 100 minutes, and All Quiet on the Western Front (1930) runs 138.

Beginning around the mid-'30s movies got incredibly longer, from a median running time of about 90 minutes to a peak of about 140 minutes by the early 1960s, accreting nearly one hour of film. For those who wish we were back in the mid-century modern period, consider having to regularly sit through a sprawling chick flick like Gone with the Wind (1939), which drags on for 224 minutes -- for the arts majors, that's 3 hours and 44 minutes. By the time this trend had neared its end, at least they let you take in more eye candy, as in El Cid (1961) -- y'know, maybe spending 3 hours with Sophia Loren ain't such a bad thing after all.

You have to keep in mind that the over-extended movies of the mid-century were what was in demand at the time, and that what's been preserved in the popular or elite imagination of that period, after it ended, does not necessarily reflect what truly resonated with audiences back then. Most film noir movies, for example, are real short compared to the mainstream. The following made it into the top 10 at the box office, yet are all under 2 hours: The Maltese Falcon (1941), Mildred Pierce (1945), The Postman Always Rings Twice (1946), and Sunset Boulevard (1950).

After a peak in the early '60s, median running times begin to fall until a relative minimum in the late 1980s. In 1961 the median was about 2 hours and 20 minutes, and by 1988 it had bottomed out at 1 hour and 45 minutes. Movies from this period are still longer than during the Jazz Age; what they share in common is a flat or falling length, compared to the rising running times of the mid-century and past 20 years.

Part of what makes the classics from this period so enduring is that, if they had been made in the mid-century or within the past 20 years, they almost surely would've been 45 to 60 minutes longer, and thereby lost some of the punch that makes such a lasting impression on audiences.

The major epic of the period, Star Wars (1977), is 2 hours long, and you spend even less time watching the religiously themed adventure Raiders of the Lost Ark (1981). Comic book movies like Superman (1978) and Superman II (1982) are somewhat shorter than the typical ones of today, running 143 and 127 minutes respectively. And the modern-day superhero movie Ghostbusters (1984) only lasts 1 hour and 45 minutes. What would have been a 3-hour war movie, Platoon (1986) is just 2 hours.

Also, the greater taste for action and comedy movies helped to keep things short and snappy, a pattern seen also during the Jazz Age. Beverly Hills Cop (1984) runs 1 hour and 45 minutes, and Dirty Harry (1971) is a bit shorter still.

By 1990, though, running times began to creep upward again and haven't fallen since. As with the mid-century, the shift was gradual and not so pronounced in the beginning. But by the 2000s, it had become clear that audiences wanted much longer movies.

On separate lengthy plane trips, I fell asleep during both the first Harry Potter and Lord of the Rings movies (2001), which dragged on for 2 1/2 hours and 3 hours respectively. And I'm proud to say I've never made it through all 3 hours of Titanic (1997), the Gone with the Wind of the Millennial age. Avatar (2009) is another return to the very long epic war adventure movie, at nearly 2 hours and 45 minutes.

Speaking of which, the original Star Wars movies are at or somewhat above 2 hours, whereas the new awful ones are closer to 2 hours and 20 minutes. And what do we gain from sitting through all that extra footage? About a thousand more BORING shots cluttered with cheap CGI junk, and another quarter-hour of pointless snore-inducing backstory.

Maybe it's just me (so many movie-goers eat this stuff up), but why do we need 2 and a half hours or more for kiddie crap like the entries in the Pirates of the Caribbean and Transformers series?

I'll try to return later to the broader scope of long vs. short cultural works across longer stretches of history. I chose the movies first because the medium has been popular across four different rising or falling-crime periods. There's also the matter of what different types of media appeal to people in different times, like the drawn-out or serial forms (Victorian novels, radio shows, and today's TV shows) vs. the more high-impact forms (Elizabethan-Jacobean plays, Romantic poems, the short story, and music videos). Not watching all these non-engaging new movies ought to free up some time to continue these ideas.

* The data start in 1921 (the only year that supplied data for just 9 feature films) and is somewhat patchy in the early-mid-'20s; it becomes annual by the late '20s, and goes through 2011. I removed short films from the early period, keeping those that were around 50-60 minutes or more. (I also removed a 27-minute documentary from 1976). All data are for the original US theatrical release.

I used the median so that quite short or quite long movies wouldn't skew the average, and taking the average of a small number of things is sketchy. In any case, the graph for the average looks pretty much the same.
Categories: Movies, Psychology